Like all industries, forestry is becoming increasingly high-tech, with new advancements “coming down the pipe” on an ongoing basis. 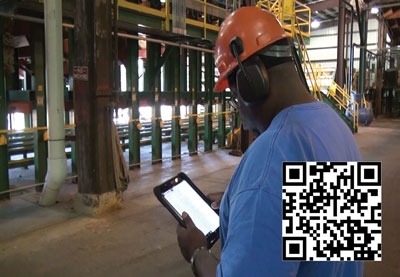 This is certainly reflected in what’s available to Canadian planer mills this year. Scanning and optimization technology continues to take significant steps forward, with strong sales that prove the worth of new developments.

Innovativ Vision had their best sales week ever in December 2012, installing seven of their WoodEye scanning systems in Canada, Germany, Russia and beyond. These were mostly sales of WoodEye 5, the newest iteration in the lineup. “It is equipped with ultramodern industrial computers and an integrated in-feed and out-feed system,” says sales manager Nicola Bugutii. “It also boasts the latest camera and laser technology, a precise inspection system and the capability for six-sided inspection.” The newly redesigned interface is the most user-friendly in company history, with multi-touch functions, interactive parameter settings and self-diagnostics. The WoodEye 5 also has an “EndScan” feature, which detects pith position and yearring distance, speed up to 900 metres per minute, and new statistics software.

The ability to wrap lots of different technologies around a small tunnel and cost-effectively capture more information about a board is why Lucidyne continues to develop lineal scanning technology rather than transverse, says Bill Briskey, Lucidyne’s director of marketing and sales. This scanning method makes it possible to solve the most complex problems, he notes, going far beyond replacing human limitations. The Lucidyne lineal scanner can operate at up to 4,000 FPM (feet per minute) and is used, among other sites, at the Weyerhaeuser planer mill in Grande Prairie, Alta. It can analyze fibre at increments of four thousands of an inch on a board’s surface, notes Briskey.

Another Lucidyne development is its “GA Sensor,” an option of its GradeScan system. “It is scheduled to be installed at the Tolko mill in Williams Lake, B.C., this spring,” says Briskey. (He also says, “The industry’s first exposure to a dedicated decay sensor will show up at one of Tolko’s facilities in Williams Lake later this year.”) The GA Sensor allows the measurement of fibre direction of a board in three dimensions. The ability to do this not only makes it possible to measure the “slope of grain” to a half of a degree for typical grading applications, Briskey explains, but also to determine the angle at which the grain is going into the wood. This provides the opportunity to map the internal fibre and use this information for applications related to strength and other specific wood attributes.

In September 2012, Microtec launched its CT-Scanning system. “This is truly a breakthrough innovation,” says CEO Federico Giudiceandrea. “It’s the world’s first industrial high-speed CT scanner for the timber industry.” Giudiceandrea says there were many challenges, such as mechanization, engineering, hardware and software challenges, that Microtec had to overcome to launch this scanning technology on the global market. “Early tests in the ‘90s would take up to 1.5 hours to complete a scan of a six-metre-long log,” he notes. “Now, in France at Siat-Braun, our CT-scanning system is continuously working at 120 metres/minute and delivering real-time bucking optimizations for log up to 25 metres.” The company believes this technology, which includes fully automated and digital log description, virtual cutting software and grading of virtual boards, offers a significant boost in value of the final product mix.

Microtec also offers the Goldeneye  line of multi-sensor optimization scanners, which sport a design heavily influenced by what the company learned through developing its CT-Scanning system. “The new generation of Goldeneye scanners opens up new opportunities in ripping, chopping, grading and sorting optimizations,” Giudiceandrea says. “Applications cover modular green and dry quality sorting scanners in transversal transport for boards up to eight metres, and high-speed planer mill applications such as finger-jointing optimizations and glue-control and moulding optimizations.”

The Goldeneye-800 operates at 600 metres/min with a board gap of only 10-40 millimetres, and the Goldeneye-900 grades at 220 boards/min with transversal scanning.

“MyMill HMI replicates, in a mobile device, all of the functionality that is typically available through a stationary HMI touchscreen,” says USNR senior marketing Associate Sonia Perrine. “It was installed at the Kalesnikoff planer mill in Thrums, B.C., in February 2013, and will soon be commissioned at San Timber in Russia.”

Since its launch only two years ago, more than 40 of USNR’s Multi-Track Fence systems have been sold. “It’s a cost-effective solution for mills that require a rapid, highly accurate fencing system in the most demanding applications, high-speed precision fencing systems for demanding applications requiring 0.25-centimetre resolution,” says Perrine. “It’s designed to retrofit into existing three-stage fence locations. The Multi-Track fence allows for wider lug spacing at higher speeds, with less critical timing than other rotary fence models.” The system operates without any air or hydraulics, using easy-to-maintain electric actuation.

Sales of the Gilbert High Speed Planer continue to remain very strong. “In the past two years, Gilbert has started up 14 new planer projects,” says planer sales manager Heidi Danbrook. “We are very proud and thankful to work with customers like Canfor, who have purchased three Gilbert planers for their Grande Prairie, Radium and Elko operations.”

Other recent sales include JD Irving, Manning Diversified Forest Products, Resolute Forest Products and Bibler Bros.
The Gilbert planer can operate at speeds from 800 to 4,000 FPM. “It uses ‘Pull-Through’’ technology, which prevents overlapping and breakages in the machine, allowing the operator to run damaged end boards with less trim loss,” says Danbrook. “It’s all electric, no hydraulic, with a small layout that will fit conveniently in an existing mill.” The Gilbert planer uses a Gilbert Automatic Positioning System to control cutterheads and other axes for optimal precision and higher grades.

High-tech ‘Marking’
Board identification is an area with new developments. Technology now available circumvents the need for board marking of any kind. These light projection systems are designed to allow check graders to more easily change optimizer settings as needed, increasing production efficiency. USNR’s new “Grade Projector” system, mounted above the lumber flow, projects the grade determined by the optimizer directly onto each board and the system tracks that projection with the board as it passes by check graders. “Check graders can then assess the grade for accuracy and make any parameter changes if necessary,” Perrine explains. The projected symbols representing the grades are customizable according to what the workers at each planer mill are used to using. One of these systems is installed at Carrier Lumber in Prince George, B.C.

Autolog introduces its “Check Grader Light Bar Info System,” which allows planer operators to verify in real time the linear ProGrader decision directly on the flat chain at the landing table. “The system is made of a top UV code reader and a dynamic grading zone of Autolog’s own design,” says sales manager Gabriel Payant. A standard characteristic of all linear planer optimizers, he notes, is a means to synchronize the board data with the board after they are on the lugs. “To do that, Autolog supplies a UV code printer located directly at the outfeed of the optimizer and a UV code reader located after the lug loader,” Payant explains.

Autolog also offers the option of an additional UV code reader on the flat chain at the landing table, which reads the grade solution and transfers this information to a light curtain bar. “The light curtain shows the optimizer grade solution to the check grader by means of different colours,” notes Payant. “The LEDs are mounted in columns of four and each row is made with LEDs of different colours, which allows displaying of 16 different grades.” For mills with cut-in-two solutions, Autolog proposes two light bars, where one bar displays the near-end grade and the other the far-end grade.

Lucidyne offers its “True-Q” lumber tracking system, which is able to use the unique “fingerprint” of a board’s surface to identify it further on in the production process. “We use it in all our scanning systems,” says Briskey.

Comact offers transverse scanning systems, which Optimization Operations Manager Stéphane Desjardins says don’t require any marking for board recognition further on in the process. Comact has delivered over 65 fully automated planer optimizers since 2004, and Desjardins says the company is proud to be the number 1 supplier in North America of graderless systems for every commercial species.

Its transverse system, known as GradExpert, detects visual defects and also measures wane and bow-crook-twist perfectly. “We believe that transverse systems are still the way to go for grading lumber properly,” Desjardins explains. “They allow you to scan boards at lower speeds for the same piece count compared to lineal scanning. With the new high-speed planers available on the market, this makes a huge difference.” In 2012, Comact sold three GradExpert systems for red cedar applications, and three for Radiata Pine processing.

Last year also saw three of Comact’s vision systems installed in hardwood applications, and another one is set for spring 2013. “This year, we will also start up the first sawmill/planer mill with vision systems in every step of the process,” says Desjardins. “The customer, Hampton Affiliates, is located in northern British Columbia. This will be a ‘premiere’ for our industry in North America.” Comact also offers a board edger application called the EdgExpert, being used in British Columbia for beetle-killed wood.