Industry News News
‘Word is getting out’: BC sawfilers’ conference grows 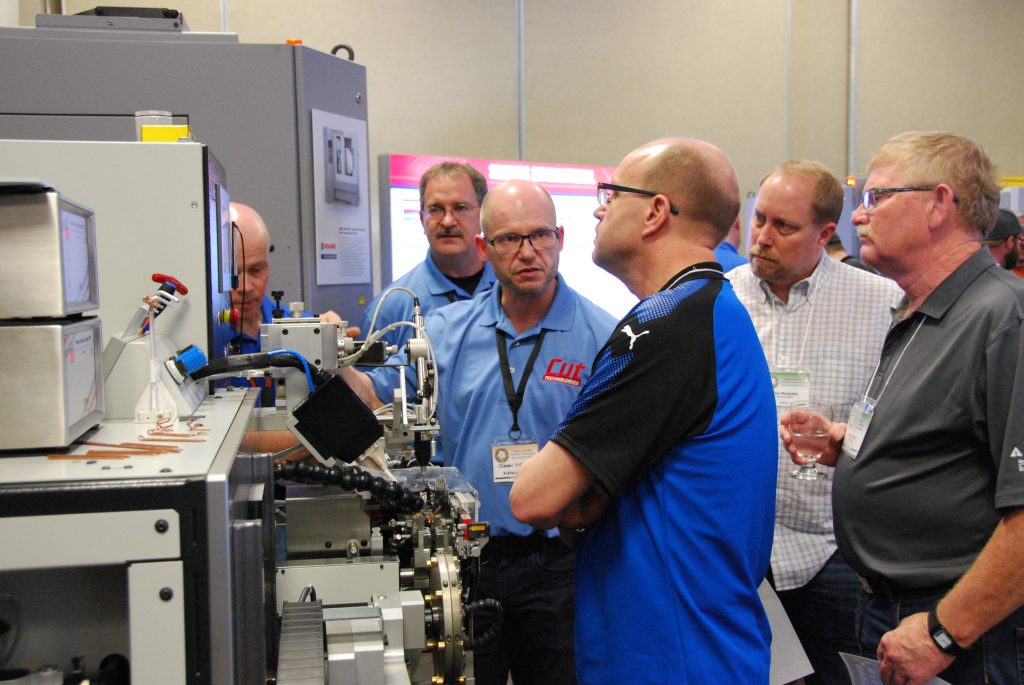 The 2018 BC Saw Filers Assocition’s annual conference welcomed around 160 registrants to learn about the newest filing room technology and network with colleagues.

B.C. is in the name, and B.C. is where they meet, but the BC Saw Filers Association’s annual conference in late April has become much more than a meeting of sawfilers in just one province.

Last year, the convention was hailed by attendees as the largest of its kind in North America. The show dwarfs smaller regional sawfiling shows in Canada and the U.S., and this year we can expect more of the same quality sessions, technology showcases, and networking opportunities.

“Word is getting out about the show,” says Bryan Glaister, association vice-president and show organizer. “This is where you have to go if you want to learn about all the new technologies.”

Glaister says robotics is becoming the norm in file rooms. “Our industry is automating, that’s the direction everything is going – auto-levellers, auto-benchers, auto-tippers. Because everything is so well measured, it’s putting out better product. But you still need a filer to operate these. A lot of those machines will be on exhibit this year.”

The show’s exhibition space sold out in mid-February with 29 exhibitors spread out over 46 booths. Many of the big and small players in the sawfiling world will showcase their latest products, some with live equipment demonstrations. A handful of overseas and U.S. manufacturers, new to the Canadian market, will also be there.

Held again at the Coast Kamloops Hotel and Conference Centre, the tradeshow portion will run a full two days, April 25-26, with a one-hour AGM scheduled for Friday morning. Saturday, April 27, will be a full day of seminars from manufacturers, sawfilers and other experts. This year, those sessions will be shorter than in previous years, capped at half an hour, to allow for more speakers over the course of the day.

Glaister says they expect a similar number of attendees as last year, which saw around 160 registrants from as far away as the U.S. Southeast.

But the show isn’t just for sawfilers. A handful of mill managers and maintenance supervisors are also typically in attendance. The show is a good chance for management to see what kind of products are out there for making lumber better, faster and more efficiently, Glaister says.

In previous years, lumber producers such as Canfor and Western Forest Products manned booths at the show to support the filers’ association, and to broadcast job opportunities for sawfilers.

“The workforce is getting older and people are retiring. There are still a lot of jobs available. You’ll see there is a trend for sending people to school from within the mill on apprenticeships,” Glaister says.

Thompson Rivers University’s Williams Lake, B.C., campus is the only school in Canada to offer a sawfiler program. Glaister says the number of young people in the school appears to be growing to meet with the industry’s demand, but there’s still too few to go around. You can expect some discussions during the show will centre on how to bring new blood into the trade.

“There’s a lot of good ideas out there; you don’t know what you’re going to get until you get here.” – Bryan Glaister

After the tradeshow wraps up on the Friday, as is tradition, there will be a full buffet dinner followed by entertainment. This year that entertainment is comedian Howie Miller.

Find more details and get tickets at www.bcsfa.ca, or by emailing bryan.glaister@gmail.com.


Related
Welcome to File Week 2018!
Williams & White introduces Kohlbacher Shark 3000 profile grinder
Growing as a leader in the saw shop
Saw Filing 101: Harmony in the file room, and the mill