Once again, the cost of trucking will be increased due to regulatory requirements south of the border. This time however, it’s safety – not the environment – that’s driving the change. 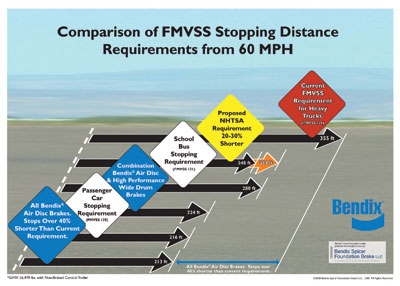 The National Highway Traffic Safety Administration (NHTSA) has been exploring ways to shorten the stopping distances of heavy-duty trucks since the Clinton Administration signed the Motor Carrier Safety Improvement Act in 1999. The goal was to reduce the number of highway fatalities in the US by 50% over 10 years. Not surprisingly, NHTSA turned its attention to transport trucks and determined that by reducing their stopping distance requirements by 20 to 30%, a lot of lives could be saved on US highways.

As always, Canada will have to comply as well, since truck manufacturers build trucks to comply with US laws and as a result Canada essentially adopts those US laws by default.

NHTSA has dragged its feet in announcing a final rule, and it’s still not clear whether trucks will be required to meet the 20% or 30% target. This spring, brake manufacturer Bendix Spicer Foundation Brake expressed hope the new rule would have been finalized by now.

“I’m optimistic it will happen in September. If not, I’m very concerned because it will most likely get delayed significantly (due to the US election),” Kishor Pendse, president of Bendix Spicer Foundation Brake said during a meeting with journalists.
Well, September came and went and the industry continues to wait on NHTSA for its final ruling. But in the meantime, OEMs have forged ahead with the development of several potential solutions for meeting the impending rule.

It’s widely felt that truckers will have three options for meeting the new requirements: larger drum brakes; a combination of air disc and drum brakes; and disc brakes on every axle. Trailers will not be impacted by the law. NHTSA is leaving it up to OEMs and customers to decide which solution best meets their purposes.

Mixed bag In the struggle to balance the need for shorter stopping distances with the equally important desire to minimize the cost this will incur, Bendix has endorsed a combination of disc and drum brakes.

“Overall, our recommendation is for disc brakes on the front and drums on the rear axles – we believe this to be the most economical solution,” Pendse said.

But disc brakes made a brief appearance in the North American trucking industry many moons ago, and the results have left a sour taste in truckers’ mouths. Back then, they were riddled with problems and were quickly shunned. Today’s disc brakes, however, are much improved. They’re already the norm in Europe and OEMs on this side of the pond have expanded their availability across all models in hopes of redemption. Truckers have long memories though, and the uptake has been slow, despite the performance advantages offered by disc brakes.

Disc brakes offer superior stopping power than drums and have several other advantages, such as their resistance to the frightening phenomenon of brake fade when overheated.

The biggest knock against disc brakes is their price tag. The cost is ultimately determined by the OEM, and disc brake proponents say the cost premium is eventually offset due to longer life and ease of maintenance. They’re simple to replace, and Mack Trucks’ Jerry Warmkessel recently told me that one customer has found that 90% of the trucks it equipped with disc brakes is running with the same pads on them 600,000 miles later.

But Mack’s Warmkessel points out the life-cycle costs will be far less when factoring in the longer life of disc brakes, as well as their maintenance savings.
“In the long run, it’s well worth the value added by the products,” said Warmkessel.

Disc brakes do weigh more than the drum counterparts you’re familiar with, but since the NHTSA requirement will require larger drum brakes, that weight differential will be mitigated, according to Warmkessel.

A tractor fully-equipped with disc brakes will actually weigh 158 lbs less than that same truck with larger drum brakes, he said. Alternatively, using disc brakes on the front axle and drums on the rear can save an owner 47 lbs.

Generally speaking, the carriers I’ve spoken to that have given disc brakes a new look, have been impressed. And so have their mechanics. Maintenance is a breeze compared to working with drums. Drivers also like them because they have a passenger car-type feel while braking.

But will they overcome the stigma that’s been attached to them since that first go-round years ago? Only time will tell. But whenever NHTSA does get around to updating the stopping distance requirements (namely, FMVSS 121), it may be worth giving disc brakes a fresh look.

They may not be for everyone, but once again regulatory changes in the US are adding new variables to the way vehicles must be spec’d and truckers should explore all their options.