View of the lumber yard with the Seaton Forest Products sawmill and Seaton Mountain in the background. Photo courtesy Kirsteen Laing.

At the foot of Seaton Mountain, near Smithers, B.C., Seaton Forest Products has been quietly building a niche for itself. The company, owned by Andy Thompson, cuts dry Grade 4 wood into cants, using wood that historically would have been left in the bush or burned. Now, as the B.C. Interior forest industry grapples with a decreasing fibre supply, Thompson hopes to continue building on this niche to expand their offerings.

Seaton Forest Products was born from the ashes of another sawmill. Thompson owned a sawmill in Fort St. James, B.C., which burned down in 2013, he tells CFI.

“We regrouped and salvaged some of the equipment from that burned sawmill. I’m originally from Smithers, so I wanted to come back here, and I owned the property,” he explains.

Thompson had previously run a headrig at the site, and decided this would be his last chance to get another sawmill up and running. He found a partner in Kirsteen Laing, a registered professional forester who had started a forestry consulting firm in 1985, but was looking for a new way to get involved in the industry.

Construction on the site began in June 2015, and production started a year later. The mill is designed to process 80,000 cubic metres of dry Grade 4 wood, mainly balsam, per year. The fibre comes from the licensees in the region, such as West Fraser and Canfor, as well as from woodlots, community forests and BC Timber Sales.

Deciding to use the Grade 4 decadent wood was a no-brainer for the company.

“If you try to get the green wood and compete with the other mills, you wouldn’t have much success,” Thompson explains. “But, nobody wanted the dry Grade 4 wood, so it was easier to get.”

Giving people a chance
The mill employs 20-25 people, working one eight-hour shift five days per week. About 75 per cent of their employees are First Nations. One of Seaton Forest Product’s goals is to employ mostly Indigenous workers, given the close proximity of several First Nations communities.

“The impact is substantial, as the other communities for employment are further away,” Laing says. “Plus, we often hire employees who may have had trouble getting employment elsewhere.

“We don’t check references. We give people a chance,” she adds.

Some new employees don’t last more than a day, given the tough nature of the work done in all weather conditions, she says. But, those who stick it out learn valuable skills and gain confidence.

One employee in particular stands out as an example of this. A young man in his mid-20s, he was very shy when he first began working at the mill. He started on the green chain on a day when it was raining, and Thompson didn’t think he’d make it through the day.

“But, he made it through the first day, and he’s improved every day,” Thompson says. “He’s gotten some of his confidence back. He’s a new kid now. He smiles, he makes eye contact. He was basically unhireable anywhere else.”

“We’ve gone through a lot of employees,” Laing adds. “Some have moved on and gotten jobs elsewhere, which is good. That’s what we want, though we hate losing them.”

Mill set-up
Laing and Thompson are both very hands-on, working side by side with their employees. But, unlike larger mills, Seaton Forest Products doesn’t have the newest automated equipment.

The mill has two lines – a scragg line and a headrig. From the log yard, the logs are fed to both lines using a log loader.

Logs under 15 inches go through the scragg line, where the saws can be adjusted to be four, six, eight or 10 inches apart. Typically, the mill runs the saws six inches apart, but they can produce cants ranging in size from 4×4 to 8×10.

The two slabs that come off the scragg line go down a conveyor to a CAE 72-inch chipper. The chipper is an older model from the 1970’s that Thompson rebuilt to make it run more efficiently. The chips are sent to Pinnacle Renewable Energy’s nearby Smithers pellet plant.

Meanwhile, the log continues on down a transfer chain, where it’s flipped and goes through another set of scragg saws to make the other two cuts. The cants then go to the trimmer, where they are trimmed to length. At this point, any rot or defects are also trimmed out. Most of the logs at the mill are trimmed to 16 feet, but they can also be cut to 13- or 10-feet lengths. Operators then peel the cants of any residual bark, manually sort them by size onto racks, and band and tag them ready for sale.

The majority of the equipment used inside the mill came from Thompson’s old mill that had burned down.

Of the two scragg saws the mill uses, one is a Mainland Elworthy. It was heavily damaged in the fire at the old mill, so Thompson and Laing had to rebuild the mechanical part of it. The other saw is built in-house. The headrig is an Exco that Thompson bought back in the mid-2000s.

“That was my first foray into sawmilling,” he says. “It’s a good headrig; we installed it and built the infrastructure around it. All the conveyors are also home-built.”

In fact, most of the equipment was built in-house, using different parts leftover from the old mill or bought from suppliers. 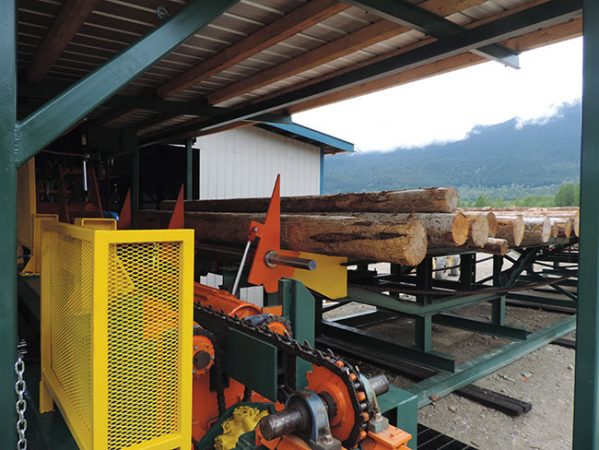 Out in the yard
While the equipment in the mill is older, it has proven to be reliable. However, the company needed newer machinery to efficiently run their operations in the log yard. So, they invested in four new John Deere machines.

The first is a Brandt-branded RTF200 forklift, which can handle up to 30,000 lbs. of payload, to load lumber onto trucks. It also helps on the green chain, taking lifts away from the chain and pushing racks in and out, Laing says.

A new John Deere 2656G log loader unloads the logs from the logging trucks, and then puts the trailers back on the trucks once the logs are off. It’s also occasionally used to sort the logs and put cants onto lifts if the bobcat is down. A new John Deere 644K loader with a log grapple feeds the mill.

Seaton also invested in a 724K chip loader, with a 7.65-m3 chip bucket. However, the mill doesn’t employ an operator to run this piece of machinery. Instead, chip truck drivers use it to load the chips onto trucks, Laing says. This makes operations more efficient, as 50 per cent of all the fibre that comes into the mill is chipped due to the nature of the dry wood.

Overall, Thompson and Laing are both extremely happy with their newest machines.

“If any one of those pieces were to break down, we wouldn’t be able to operate,” Thompson says.

Tough competition
But, since the mill began operating in 2016, the available fibre supply in B.C. has changed dramatically as the province transitions away from harvesting mountain pine beetle-killed stands. On top of that, the province’s wood pellet industry is growing, and Pinnacle Renewable Energy recently built a plant in Smithers. As a result, Seaton Forest Products is facing tough competition for fibre.

“Pinnacle uses the same type of fibre we use – the decadent and dry kind of wood. So, the lines are blurred sometimes as to what goes there and what comes to our place,” Thompson says.

To improve their access to fibre, Thompson and Laing are working with the provincial government to obtain a small area or volume-based license. If they get this license, they might expand their operations.

Thompson’s partner owns a farm next to the mill, and they see an opportunity to build a second facility on this property where they could sort all of the Grade 4 wood in the area. They would produce cants from these logs and chip the remaining fibre for the pellet or pulp industries.

“I see that the burgeoning market seems to be pellets – everybody wants to make pellets. But, there is a shortage of fibre for that already. As a matter of fact, they’re shipping pulp logs from our area 400 kilometres east of here to Prince George to pulp mills,” Thompson explains.

“And they haul pulp logs and chips to Vancouver Island. We are geographically located amongst a very decadent, aging forest, and there’s a lot of it. So, we’d like to work with the government to set up a program where all of the dry wood comes to our place, we sort it and send chips.”

A fight for fibre
Looking ahead, Thompson and Laing believe that there will continue to be high competition for a dwindling supply of logs, especially with increased demand from end users.

To help solve the fibre issue, they want to see the return of appurtency, a policy set by the B.C. government whereby a mill would get first access to the fibre in the geographic area around it.

“So, for instance, Seaton, in our minds, should have appurtency. We should have first crack at the type of fibre we want in a 100-kilometre radius,” Thompson says. “But, they’ve taken that away, so now fibre can go anywhere, and it goes to the highest bidder. That’s a problem that we’d like to see rectified.”

If appurtency returns or the mill gets a license for dry wood, then Thompson and Laing believe the mill will be able to continue operating at its current production levels for the next 10-20 years.

“We believe that we check off a lot of the boxes that everybody wants in business these days,” Thompson adds. “We think we’re doing an environmentally favourable thing by using the dry fibre that used to be burned in the bush. We employ First Nations and we’re locally owned.”