In light of the many sawmills that shutdown permanently in B.C. and other provinces last year, it’s more important than ever for loggers to have a diverse log market for their products. Like in 2018, the log market seems to be diversifying, especially in the east.

According to the results of CFI’s 2020 Contractor Survey, the number of contractors supplying to more than five mills has increased slightly from 15 per cent in 2018 to 16 per cent in 2020.

Correspondingly, the number of contractors who supply only one mill has decreased from 19 per cent in 2018 to 16 per cent in 2020. This is a sharp drop compared to 2016, when that number was 36 per cent.

A good number of loggers (22 per cent) say they supply to three mills, compared to 19 per cent in 2018. But there are fewer contractors who supply four or five mills – nine per cent and five per cent, respectively. This drop might be because a higher number of sub-contractors responded to the survey this year than in 2018. 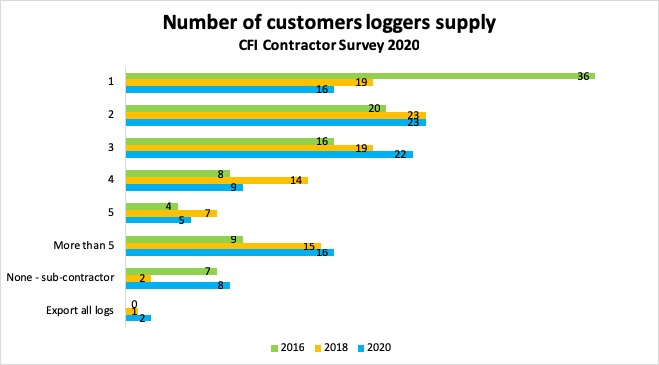 Percentage of contractors reporting customer numbers for timber or other products.

Regionally, just as in 2018, contractors in the east have more customers than those in the west. Loggers in Atlantic Canada continue to have the most options when it comes to mills vying for their fibre – 41.5 per cent of contractors have five or more customers for their logs or wood products such as biomass or pulp chips. This is nearly the same number as in 2018 (42 per cent).

No loggers in Atlantic Canada report supplying just one mill, compared to 11 per cent in 2018. This change might be explained by the shutdown of Northern Pulp in January. But, the numbers aren’t really a surprise given the number of small, family-owned operations in this relatively small region.

Ontario contractors come in second place with regards to the number of customers, with 31 per cent supplying five or more mills. Slightly more loggers in the province – 32 per cent- supply one or two customers, a sizeable decrease from 50 per cent in 2018.

Meanwhile, contractors in Alberta seem to deal with the fewest mills, with more than half of respondents – 55 per cent – supplying two mills, and none supplying five or more. In comparison, in 2018, seven per cent of Alberta loggers said they had five or more customers. These numbers suggest the region is struggling to find more customers for their fibre, a worrying sign for the industry.

Next door in the B.C. Interior, the majority of loggers report supplying to three customers (45 per cent), with just six per cent saying they supply to four or more contractors. The market seems to be diversifying, as just 35 per cent supply to one or two customers, a decrease from the 50 per cent in 2018.

Results from the survey also suggest that the log market is diversifying in the B.C. Coast: 18 per cent of loggers say they supply to just one mill, down from the 31 per cent who said so in 2018. Most contractors in the region say they supply to two or three mills (47 per cent), while just 12 per cent supply to more than five. But, these numbers should be taken with a grain of salt, given that 24 per cent of respondents are sub-contractors compared to zero per cent in 2018. 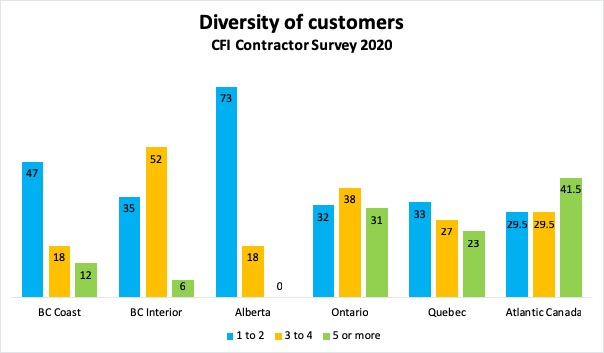