Canadian logging contractors continue to struggle with logging rates, profitability and succession planning. This is according to a survey conducted on behalf of Canadian Forest Industries and woodbusiness.ca this past spring. The survey was conducted by independent research company Bramm & Associates. 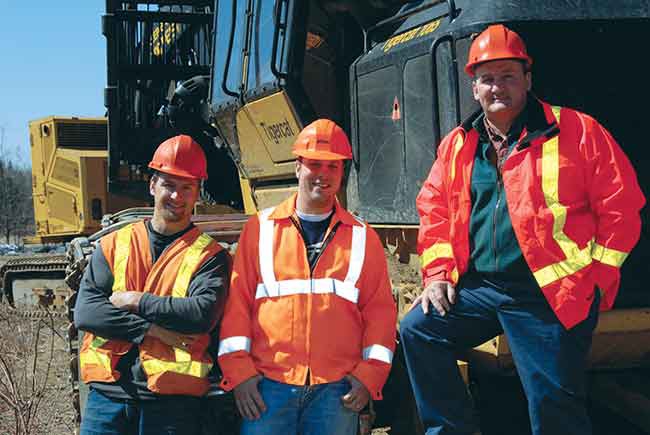 Responses closely matched the distribution of the industry itself, with 50 per cent of responses coming from Western Canada, 25 per cent from Quebec (where the survey was done in French), and 10 per cent each from Ontario and Atlantic Canada.

While results vary by location and company size, a few common traits emerged on the key issues and concerns facing Canadian loggers:

Profit
While most loggers and mill woodlands managers felt a profit margin of 11 per cent or more was fair for seasoned contractors, the reality falls well short. With 17 per cent making no profit at all and two thirds making between one and 10 per cent, that leaves only 9 per cent making 11 per cent or more. Again, smaller contractors tend to make a lower margin, and Ontario fared the worst among regions with almost one-third (31 per cent) reporting no profit at all.

Age
Not surprisingly Canada’s contractor force skews to the older side, with 56 per cent being over 46 years old. In total, 57 per cent expect to be out of the industry within 10 years, numbers that keep industry managers awake at night.

Still, there were some surprises. Quebec, for one, boasts a logging force much younger than average or expected. Almost 90 per cent of its loggers are under 55, with a whopping 42 per cent under 35. The next closest youth wave is Ontario, with just 18 per cent younger than 35 years.

That compares to just eight per cent in the younger age group in the B.C. Interior and Alberta, nine per cent in Atlantic Canada, and 11 per cent on the B.C. Coast, regions with some work to do attracting the next generation of forestry entrepreneurs.

That still leaves the question of what Quebec is doing right. Are they doing something different in recruiting or succession planning, is it the wealth of forestry training schools, or is it more a reflection of the province’s smaller contractor size making it easier for the next generation to take over?

Succession planning
This is also a big concern for industry. Fifty-seven per cent planning to leave the industry inside of 10 years needs to be replaced, and it doesn’t seem from the survey results like the plans are in place to make that happen. Just over a quarter of loggers plan to pass the torch to their children, and nine per cent have a staff takeover in mind. That leaves almost two-thirds with no plan at all – 32 per cent have no plans, 22 per cent are looking to auction, and 12 per cent hope to sell to another contractor.

The regions with the foggiest plans include Alberta, Ontario and Atlantic Canada. Almost 40 per cent of contractors in Alberta and Ontario have no succession plans at all. In Alberta, a further 30 per cent plan to auction their gear, meaning less than a third have any real succession plan that would benefit the industry. Almost two thirds of contractors in Atlantic Canada plan to auction gear or have no other solid plan.

In contrast, while loggers in B.C. are more likely to have some form of succession plan, for many of them it sure won’t be their kids taking over. A full 45 per cent of loggers in Canada’s largest logging province do not want their children assuming the company, compared to 20 per cent or less in most other regions. In Quebec, where 40 per cent of loggers expect their children to take over, just 13 per cent say they would not want their kids buying the family business.

Operator wages
Not surprisingly, equipment operator rates vary greatly by company size, but more importantly by region. Recent events in Alberta aside, competition for labour is generally more intense as you head west, facts that weigh on our 2016 survey results.

Regardless of company size, rates above $30/hr are mostly a western phenomenon, with 76 per cent of B.C. Coast contractors paying those rates, followed by Alberta (55 per cent) and the Interior (44 per cent). In all three regions, between 94 and 100 per cent of operators make over $26/hr

In contrast, the other side of the country skews in the opposite direction, with the bulk making $25/hr or less. In Ontario $21-$25/hr is more the norm (62 per cent), while in Quebec rates are split between $21-$25/hr (44 per cent) and $20 or less (26 per cent), largely around company size. The vast majority of operators in Atlantic Canada (80 per cent) make $20/hr or less. Benefits follow a similar pattern.

The job’s perks
When it comes to aspects of the contractor role that Canadian loggers enjoy, company size and location matter a good deal. The size of your company determines your likely role, with smaller contractors tending to be more hands on.

So while 53 per cent claim that the ability to work in the woods is important, a full 71 per cent of the smallest contractors (<$1M) say so. That makes sense, as they are likely machine operators as well as owners. On the other end of the spectrum, only 37 per cent of the largest contractors (>$5M) see working in the woods as a perk – they likely spend little time out there.  Loggers in Atlantic Canada (82 per cent) and Quebec (70 per cent) are most likely to see woods time as a perk, those in the B.C. Interior (39 per cent) and Alberta (40 per cent) are least likely.

Not surprisingly financial compensation came in dead last among aspects that respondents most enjoy (15 per cent), followed by the continuation of family tradition (20 per cent).

Needs improvement
Thus it’s also not surprising that contractors of all size rate compensation as the number one aspect of the role that must be improved to attract new contractors (78 per cent). That is followed by employment stability (52 per cent), co-operation with wood buyers/mills (37 per cent), and simplification of regulations and procedures (34 per cent).

Somewhat surprisingly neither access to finance (14 per cent) nor workload and hours (27 per cent) are as important as expected, although finance becomes an increasingly important issue as you head east. Loggers in Ontario (31 per cent), Quebec (30 per cent), and Atlantic Canada (24 per cent) are more likely to see finance as a potential issue.

For detailed results on each of these issues and more, see our collection of Survey Snippets or look for our complete digital survey report at www.woodbusiness.ca.

and nine per cent have a staff takeover in mind. That leaves almost two thirds of contractors with no plan at all.