North of Lac Saint-Jean, deep in the spruce and fir forests of central Quebec, Pascal Bouchard carries on with the business his father started 40 years ago. 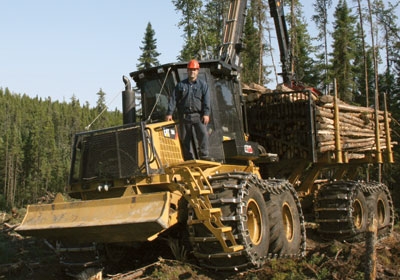 Bouchard, 35, started working with his father when he was just 15 years old. They worked side-by-side doing tree length harvesting until 2006 when his father passed away.

Bouchard’s company, Coupe Forestière GPB Inc., logs in the territory around Lac Saint-Jean and supplies wood to AbitibiBowater sawmills in La Doré, Lac Saint-Jean. About two years ago, AbitibiBowater required Bouchard to change from tree length to short wood — 8 or 16 ft. Making the switch meant retiring his feller buncher and delimber and converting to cut-to-length (CTL) equipment. He started with a Cat® TK721 harvester with a Waratah HTH616 processing head. 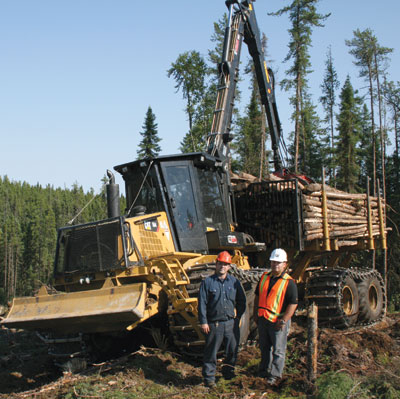 In summer 2008, Hewitt Equipment Limited, the Cat dealer for Quebec and Western Labrador, asked Bouchard if he would test Caterpillar’s prototype for a new line of forwarders. Bouchard was an ideal candidate because he would put a lot of hours on the machine in a short period of time and in extreme conditions. The company also needed an operator who was diligent about keeping records and not shy about providing feedback.

Testing the Prototype
Bouchard operated the Cat 18-ton forwarder prototype for about five weeks, putting approximately 450 hours on the machine. He had three main issues with the prototype: The main boom hydraulic cylinder kept breaking, the joystick was in the way when he wanted to turn in his seat to operate the log loader, and the loader valve banks were not easily accessible for servicing.

He knows Caterpillar took his comments to heart. One year later, he purchased the first Cat 584 forwarder off the production line and ticks off the changes from the prototype he ran. “I’ve had no problems with the hydraulic cylinder. The joystick was moved, so now I have a lot of room to swing around in my seat to run the log loader. And Cat moved the valve banks to beneath the rear window where they’re easy to access and there is plenty of room to work on them.” 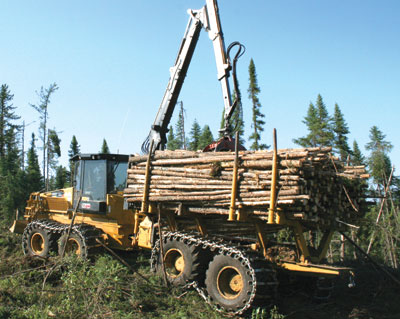 Bouchard says he prefers big machines because he is confident they are built solid and they will be more stable. “The Cat 584 has been reinforced all over.” he says. “It is a lot less scary to attack steep terrain, which is very common in our Quebec forests!”

With the soil and snow they have, Bouchard says he also needs power — torque, not necessarily speed. “When I’m in the bush in a swampy area and the forwarder is carrying a full load, I know I won’t get stuck.”

Big Capacity
The 18-ton capacity is another advantage. “I can make just one trip, rather than two or three, into the bush,” he says. And the blade comes in handy. “When we go to a new location there can be a lot of debris on the trail. With the blade I can move that stuff — I don’t need the harvester to push the debris out of the way. The blade also protects the radiator in front.”

Bouchard deals with Hewitt’s branch office in Chicoutimi and says he feels confident that they will take care of him with service, help, and follow-up. Hewitt assisted Bouchard with his forwarder purchase by taking some of his whole tree equipment in on trade.

When asked how he is dealing with the recession, Bouchard uses a French expression that loosely translates to “you need strong shoulders” to get through this deep recession. But he claims that what he is doing to survive is not complicated. “We have to be very careful with expenses. It’s over 300 kilometres to the camp in the bush, so I am being more careful about transportation costs — the vehicles, the fuel. I cut where I can,” he says.

Operating 24/7
Labour is not one of the expenses where he is cutting back. Bouchard has five machine operators, plus his sister is the bookkeeper and office manager. From 7 a.m. Monday to midday Friday, Bouchard runs a 24-hour-a-day operation divided into 12-hour shifts. This is not new; his company has been a 24-hour operation for 20 years.

During a shift, one operator runs the harvester, while another operates the forwarder. After six hours, they trade places. “I do this to maximize people productivity,” he explains. “With everything it takes to run a harvester — the concentration, constantly moving back and forth — after six hours, an operator is tired and production can suffer. The forwarder operator is fresher and can take over and keep production up.”

Bouchard says he has no problem spending more than 12 hours in the forwarder cab. “It is very comfortable. The suspension is great. The cab makes you feel like you are in a Cadillac,” he says. “Visibility is good and noise is low, so it is pleasant to drive and to see all around.”

After an operator’s 12-hour shift, he is off for 12 hours. Not so with the machines. “I put over 100 hours per week on each machine.” He laughs when asked if he goes by the book on machine maintenance. “I’m not following the owner’s manual at all! During the eight months of the year that we are in the bush, we only have time to do quick repairs to get up and running again as fast as possible.”

Time Off
The machines get a rest during the three-month hiatus, March through May – that’s when the ground is too muddy to work – and for another two weeks in summer and two weeks at Christmas. During this time, Bouchard thoroughly services the machines. After a machine is out of warranty, he relies on the dealer for technical information but does most of the work himself.

Besides repair work, Bouchard will customize his equipment, sometimes adding skid plates and other reinforcement necessary for logging in the rough environment of Quebec. He has not, however, had to add any protective plates to the Cat forwarder.

Bouchard uses quality products in his machines and expects his CTL equipment to last 10 years minimum. “It depends on how well you take care of your machines. Tree length logging is definitely tougher on the machine than short wood and I had my feller buncher for nine years,” he says.

Bouchard has three children, including a six-year-old boy. He doesn’t even wait for the French translation when asked if he wants his son to go into the business. “No, no, no!”

He explains that this is partly because of his experience with his own father. “During the week, your father is your boss and on the weekend, your father is your father. It is hard to live with that.”
He also says it’s very difficult to be in forestry now. “Before, working in the bush was very good, the money was good. Now it’s very difficult to not go over quota.” And then he adds, with a note of sadness, “In the logging business you have more memories than future.”

But despite everything, Bouchard says he would not consider going into another business. “No, this is my passion,” he concludes.

Connie Ness is a freelance writer who works for Caterpillar and other organizations.