Walking into the Elk Lake Eco Centre, you can’t help but notice the inclusion of wood both outside and inside the building. The front entrance, the main support beams, much of the furniture, the floors, and accents surrounding a massive stone fireplace all benefit from the warmth created by the use of mainly local wood products. 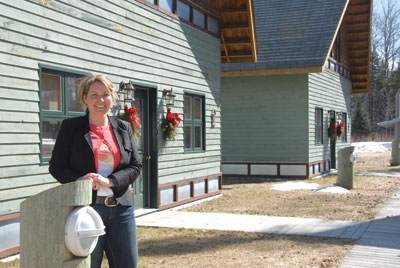 “This centre was built with the help of the federal and provincial governments and an array of forest products companies,” explains Pam Hamel, the centre’s executive director. “The entire envelope of the building is made from wood and wood technology is used in everything from the structural supports to the exterior walls and from the floors to the tables in our dining area and conference rooms.”

The Eco Centre was originally built in 1999 at a cost of $3.5 million. The centre’s  mandate was to create diversification in the local economy through the construction of a state-of-the-art training centre that would employ local people and bring new revenue into the small community of Elk Lake, which is located almost 600 kilometres directly north of Toronto. 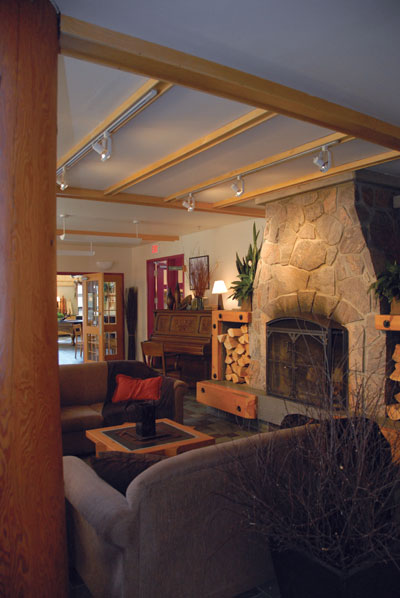 In addition to the main conference centre, the property also features six chalets for a total of 35 rooms, all of which use wood extensively.  Hamel says on the environmental front she sometimes gets asked by some of the centre’s 3,000 plus annual  visitors how they can support the forest sector by using so much wood if they are an eco centre? She takes the opportunity to so a little education and some good public relations for the forest industry, which is still the main industry in town with the Eacom Elk Lake sawmill and the Elk Lake Planer Mill located less than a kilometer away. “Building with wood is the best environmental choice,” she says. “It’s renewable and Ontario has some of the best sustainably managed forests in the world.”

In fact, the Eco Centre won the Wood Works Wood Use Advocate Award in 2007 and sponsors the Ontario  Wood Works Gala, held annually in Toronto. They even have a line of signature value added wood products for sale from cutting boards to vases. In the Wood Works award submission, the Thunder Bay architectural firm that designed the centre notes, “the mandate of the architect was to maximize the use of local wood products (many of which were donated by local producers) to complete the construction of the facility. In light of this the Elk Lake Eco Centre embodies the commitmentof the community, the forest industry, and forest management stakeholders to provide the stewardship necessary to sustain the broad spectrum of resources which is the northern forest.”

From a structural standpoint,  Douglas fir poles were used as interior supports for the pre-engineered wood truss roof system and the wood joists used in the mezzanine level, while the walls are all wood frame construction with re-sawn 1×6 SPF used as exterior wood siding and trim. Gable ends are finished in western red cedar shingles, while interior finishes include sanded wafer board floor tile, paralam beams, exposed wafer board paneling and birch trims.

It hasn’t been an easy ride for the centre and Hamel says in 2004, they were forced to close their doors due to unforeseen circumstances. “SARS came into play, which really took a toll on the travel industry and with a downturn in the economy, we just weren’t seeing the level of business that we had hoped to attract.”

By working closely with the Ontario government they were able to open up again in 2006. Hamel joined the centre in January 2007 and although she was facing a tough scenario, she has managed to work with the local community to bring the business back. “We have really got involved in the local community by making a commitment to buy local when we can for things like food and supplies and by becoming the largest employer of woman and youth in Elk Lake,” she explains. “By being involved locally here in northern Ontario we have been able to attract school boards, company conferences, weddings and other events and that is really helping us to succeed.”

Related
SFI Continues to Grow
Is the War of the Woods Over?
A Great Story to Tell
Balancing Act