When the market is a bear – why not bring on a Bear? That was the rationale behind Ponsse’s debut of the Bear CTL harvester this June as it made its first Canadian appearance at the Prince George show (see CFI June/July at www.canadianforestindustries.ca) and then into Vernon, where a dozen contractors gathered to see whether it would challenge the existing, but evolving, CTL market in BC. 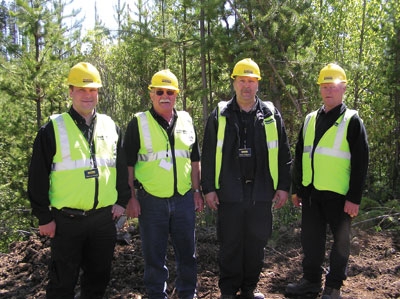 From left are Hannu Kivela When the market is a bear – why not bring on a Bear? That was the rationale behind Ponsse’s debut of the Bear CTL harvester this June as it made its first Canadian appearance at the Prince George show (see CFI June/July at www.canadianforestindustries.ca) and then into Vernon

“It’s perfect timing,” says Marko Mattila, president of Ponsse’s North America group as his company rolled out big bruin iron and its counterpart, the Elephant forwarder, on a hilly region just outside Vernon. Together, these big boys carry roughly a $1.4 million price tag. Even if Ponsse wasn’t new to the west, that figure in today’s market might be enough to take the breath away from most contractors, many hanging on by mere rosary beads borrowed from their bankers.

Mattila, though, is unfazed. Like in other markets it has entered, Ponsse has a long-range view. He realizes that contractors have to build confidence in the equipment and in the servicing that stands behind it. “When the forest industry is in a slow time, that’s good timing to start working with the local loggers,” he says as we trudge up the hill to gain a better vantage spot with those loggers who have come to see the Vernon demonstration. “We also know that fuel prices are getting higher.” The new line of Ponsse rubber-tired equipment has been developed for markets that have struggled with higher fuel prices for decades.

Ponsse is well known in Eastern Canada and parts of the US, where there are 500 to 600 machines working according to Ponsse. “Our first 10 customers are still with us and buying from us,” says Mattila. The forest demos are part of Ponsse’s strategy for entering the Western Canadian market, which also includes returning the machine to Prince George to do more focused studies on harvesting productivity.

Initially, Ponsse sought out Woodland Equipment Inc. as the distributor for its product in BC. “They chose us,” says Woodland’s Vernon branch manager and veteran forest machine salesman Terry Hynes. It appears a good fit for both parties. Ponsse has bagged an advantage with Woodland’s Hynes, who years ago brought some of the original CTL machines from another manufacturer into BC, and already knows some of the ups and downs of using the technology in this market.

Battle Tested
Hynes has ventured to Finland to see the machines built, and says he was impressed with the fact that every machine goes out in the field to work a day, so that deficiencies are noted and corrected when the machine is returned to the manufacturing plant. “Any little bruises or scrapes are touched up – except for the grapple head – those marks are left to show it’s done a day’s work,” he says. This kind of field testing of each unit “is just not done” by other manufacturers, he adds.

As well, with a firm foothold in Eastern Canada and the US, there is a major supply of parts in Rhinelander, WI. While a stocking depot will be established in BC’s Interior region to serve customers, Hynes explains that if a part is not available in BC, it will only be a “day or two max to get that part from the US. There will be no wait for over-seas parts to be shipped in.”

Below on the demo slope, the Bear – Ponsse names its machines rather than using serial numbers – quickly moves through the typical Interior spruce and pine stands. A big machine, the Bear boasts an impressive 11-metre reach. Yet that does not come at the cost of brawn, as the harvester still hangs Ponsse’s biggest head – the H8 – on the business end. It can thus reach around stems easily, making it suitable for selective harvesting or thinning operations, but can handle bigger wood in clearcuts. While BC loggers tend to think they have a monopoly on big wood, CFI saw the very first Bear working in central Finland in January 2007 in massive pine that would make an Interior sawmiller envious. Neither the company, nor its machines, are strangers to big wood.

The H8 processes at 18 feet per second, and the skilled Finnish operator uses gravity and the falling tree to spool the first stem’s worth through the processing head. A mat of debris is deposited in front of the machine, providing a cushion for the machine to ride upon but also one that the Elephant forwarder can utilize to access and retrieve a heavy load of wood. CTL logs are deposited in windrows ready for pickup as the 18-tonne Elephant moves in.

“The machine (Bear) is designed to run the head,” says Ponsse’s customer service representative in Western Canada Terry O’Connell, adding that the head and crane was purpose-built for the machine. “So, the head gets the dedicated amount of power that it needs to operate efficiently.” Here again Ponsse has lucked out with its western representation, as O’Connell will be well known to many as part of the team that introduced Lako harvesting heads to BC and Alberta in the late ’80s and ’90s. Ponsse bought Lako back in 2005, but continues to run it as a separate division.

The rubber-tired Bear is the first in Canada, but there are four working in the US, says Marko, adding that the unit is geared for larger timber with tree sizes ranging up to a 28-30 inch stem at ground level. While it is geared for larger wood with its 322-horsepower Mercedes engine, its speed allows it to move through smaller stems quickly, although wood volumes of course drop. One of the features seen at the demo site, which was on a sloped area, was the unit’s ability to climb smoothly over the slope, even moving backwards down the slope at times with ease. Mattila says that depending on operator skill and terrain, the machine can go up to a 35-degree slope, but adds that figure is also dependent upon local safety regulations.

The C55 model crane on the Bear has not only the 11-metre reach but its lift capacity is 255 kNm and it offers two slewing motors able to generate 50 kNm of slewing power. The cab and the 11-metre crane are set on different portions of the frame to isolate operators from vibrations and jarring movements.

Mattila was pleased with the positive feedback from contractors attending the demo. CFI heard comments that ranged from doubts regarding the price, to praise for the machine’s ability and design. There were essentially two features that stuck with contractors attending the demo. The first was the Bear’s ability to pack in a day’s work on reduced fuel consumption. The average per hour consumption rate for the Bear’s day-long operation at the demo site was 17 litres, while the combined rate for the Bear and Elephant was 30 litres per hour. With mounting fuel costs, the cost of running a machine for a day’s work is becoming increasingly important. Hynes says the unit’s “Mercedes Benz engine offers a lot more horsepower at a fuel saving.”

The other feature that impressed was the ergonomic cab designed to buffer noise and the rigours of dealing with large logs. The Bear’s cab (with large windows and guarded lights for night work) is roomy enough to comfortably fit two riders in the rear. The feature is especially useful for training new operators or for taking on board observers. 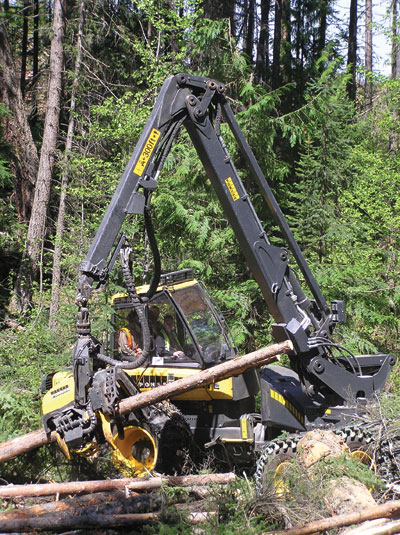 The Elephant forwarder is rated to carry an 18-tonne payload. However, at the demo side the unit carried an estimated 22-tonne load up an adverse slope to unload at the roadside landing. The 8WD unit (as opposed to the 6WD version available) at the demo site moved easily up and down the slope on the debris mat with the crane able to grasp multi-stems to quicken the loading and unloading. The Elephant’s bunk can also be pulled out to accommodate a double load of short logs.

Contractors on site for the demo were both long log and short log operators.  Hynes said that there is an industry awareness – that is growing as the mountain mine beetle wood is exhausted – that BC and Western Canada will follow the rest of Canada into more CTL production. Industry Canada estimates that Canada’s annual harvest is close to 30% shortwood. As the fibre base changes, “it is going to initiate change”, predicts Hynes.

For contractors gathered at the site, that also means new investment and potentially more costs as the fibre base shrinks along with margins. As Bob Shunter, the founder of R.J. Shunter Contracting, quipped as he walked to see the demo: “I started 54 years ago putting $250 into the company – and I’m not quitting until I get it back.”