In a small stand of trees surrounded by farmland, a brand new Logset 10H harvester goes through its final testing before being trucked back to the Logset factory in nearby Koivulahti, Finland, a small town close to the western Finnish city of Vaasa. 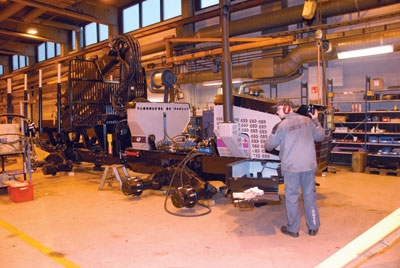 In a small stand of trees surrounded by farmland

The mud on the tires of this 10H will be cleaned off and the machine will be brought back to showroom condition before it is shipped to a customer in England. The 10H is a perfect partner for Logset’s other top machine – the brand new 10F forwarder. This 10H may only be making the short jaunt to the UK, but at Logset, the company’s management is looking further afield, and Canada is at the top of the list for potential markets.

The land of ice hockey (The Finns may dispute this statement), maple syrup and the red and white isn’t a new market for Logset as the company has been selling its equipment here for almost a decade, but for the most part, they have focused on eastern Canada, including Quebec, where tree diameters were a good fit for the company’s smaller machines, ranging from the 4-series to the 8-series. But with the 10H and 10F Titan models now available, Logset’s managing director Pasi Nieminen and area sales manager for Canada, France, Spain and the Baltic region, Pascal Rety, are both confident that Logset equipment will soon be seen in the west, including British Columbia.

New Dealers
The company has been looking for new dealers across Canada and they recently formed an agreement with LN Machinerie in Canton-Tremblay, Que., which is about 200 kilometres north of Quebec City and close to Chicoutami. LN Machinerie expanded its facility to better serve Logset customers and Logset is still on a search for dealers in other areas of Canada, especially in the interior of B.C., northern Alberta and Ontario.

“We are very happy to be working with LN Machinerie and we are planning on holding an open house with them before summer,” explains Rety. “We will time this with the introduction of the 10F into the Canadian market. We will also continue to look for dealers in the western part of Canada. It’s such a large country that we want to offer our customers regional service where possible.”

Nieminen says the timing is right for Logset to expand its presence in Canada. “The markets in most areas of the world seem to be improving at the moment, and that includes Canada,” he explains. “About 55% of our turnover (sales) right now is in Central and Southern Europe, about 25% is in Finland and Sweden, and the balance is primarily in Canada, Russia and Chile. For us, outside of Europe, we see Canada as our most important market and it is one of the top six markets in the world for us. In our opinion, Canada and Russia will grow over the next few years to 35% to 40% of our
worldwide sales.”

According to Rety, one of the biggest challenges for Logset right now is keeping up with the rapidly increasing demand Nieminen refers to. “Sales dropped off rapidly for us and other equipment manufacturers when the economy turned down, but we have seen our sales rebound just as quickly over the past few months,” he explains. “Demand for machines in the forestry, earth moving and agriculture sectors is increasing, and that means equipment manufacturers are all competing for common components. Right now, once an order is placed, we are sitting at about 12 weeks for the delivery of new machines. For us, that is the optimal timing and we are hiring new people so that we can maintain that time frame.”

However, Rety and Nieminen caution that Logset’s method of building the machines can limit production numbers due to space. “We don’t work on an assembly line,” Nieminen explains. “Our assembly engineers generally work in teams of three and each team will build a machine from the ground up. The machine stays in one place and the parts are brought to the machine.”

He says from a quality perspective the process they use works well and is strictly controlled, but he says they can only fit a certain number of machines in the factory at any given time, and on average, a forwarder will take 10 working days to build and a harvester will, on average, take between 10 and 13 days.  He also notes that they try to limit the number of machines they build in a year to around 100 to 150. “Right now, that’s the optimum number for us,” he adds.

After Sales Service
As for bringing the 10F and 10H models to Canada and expanding the company’s Canadian presence, Rety says they understand that they “must offer customers something different,” and they “need to listen to their dealers and end users when it comes to giving the customer what they want.” He also recognizes that the after sales service is crucial to their success in Canada and that is one of the reasons they want to find regional dealers. “Making the first sale can be easy, but the after sales support has to be there if you want to make that second sale,” he explains. “When we launch the 10F in Canada, we will provide operator training and ensure that our dealers have a parts inventory and the technical support to service our customers.”

Logset’s efforts in Canada haven’t gone unnoticed, and late last year, two Canadian dignitaries from the Canadian embassy in Finland visited the Logset factory. Senior trade commissioner Stephen Chase  and trade commissioner  Johan Nyman  toured the plant and discussed the company’s plans to expand in Canada. “Meeting with the Canadian embassy staff helped us better understand the Canadian market and provided us with important contacts for future collaboration, while at the same time, it provided Mr. Chase and Mr. Nyman an opportunity to learn what a Finnish company involved in international exports needs in order to succeed in Canada,” Rety says.

The 10H is one of the biggest purpose-built harvesters on the market. The stability of the base machine coupled with a powerful crane provides loggers with a big advantage when cutting large diameter and heavy trees. The 10H also features double work pumps and a high torque engine, which makes it possible to simultaneously work with both the harvester head and the crane.

The 10F Titan is the big brother of the Logset Titan forwarder series. This 18 tonne forwarder has an exceptionally robust and reliable structure. The 10F Titan has been designed to withstand even the hardest conditions in market areas such as Canada. The 10F Titan with its superior performance and capacity is ideally suited for the long hauls. The expandable load bay can be widened by 60 cm and has a hydraulic tail section, which provides an extra length of 70 cm if needed. 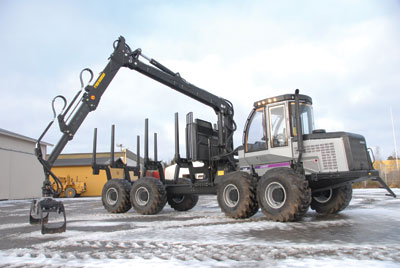 For more information on these and other Logset equipment, visit: www.logset.com