Lorin Dassow doesn’t jump into anything when it comes to buying new equipment. In fact, he has his own live-in design engineer help him evaluate a machine before he signs on the dotted line. This isn’t why he married her, of course, but wife Bobbi’s degree in mechanical design and experience with heavy equipment is a fringe benefit for this logger when he has to make big ticket purchase decisions. 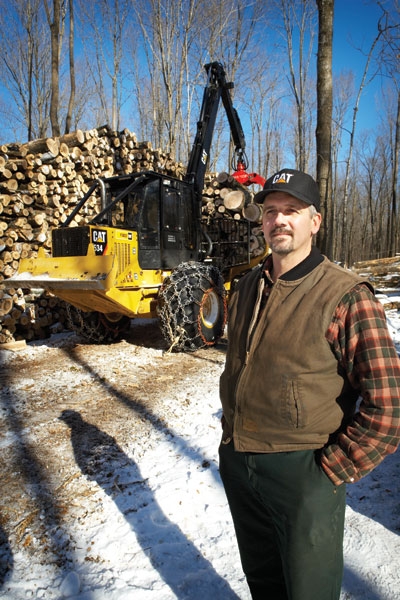 Lorin Dassow likes the small size of his operation Lorin Dassow doesn’t jump into anything when it comes to buying new equipment. In fact 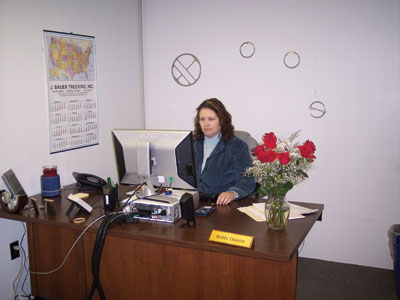 Last year, Dassow traded in his Fabtek forwarder for a Cat 534 forwarder from local dealer FABCO. Bobbi helped him decide between two makes. “When you spend that kind of money, you want every opportunity to find something wrong,” explains the logger from northern Wisconsin. “I knew what I wanted and she knew what to look for structurally.”

After about 100 hours on the machine, Dassow says he is glad he bought the Cat forwarder. “My wife and I kicked this idea around a long time, and I’m very happy with my decision.”

Dassow, 46, caught logging fever when he was 12 years old running chainsaw for his dad. After high school, they worked as a team until his father retired about two years ago. His father didn’t exactly encourage him to stay in logging.
“He wanted me to go to town and get a job because there wasn’t enough money in it and because of health concerns, he explains. “We both have arthritis, and you’re in the snow, always with wet gloves. It takes its toll.”

But Dassow loved logging, so he worked by himself until last July when he teamed up with a logger he’d known for a long time, Jim Poyda, who runs a Fabek FT153 harvester, also from FABCO. Their deal is simple: Poyda gets so much for cutting, Dassow gets so much for skidding, and then after trucking is paid, they split the remainder.

With a new partner in place, next came the new machine. “I figured I could either pay Uncle Sam or get a new machine. The Fabtek forwarder was fine, the motor was good, but it had 11,700 hours on it. You can expect to work on a machine that has that many hours on it,” he says. “When I was on my own, I’d cut two-thirds of the day and then skid, so the machine was sitting a third of the day. But now it’s running from 7 a.m. to 9 or 10 at night.”

Landowner Perceptions
In upgrading, Dassow considered trading his single bunk for a double. It was a hard decision, but he stayed with a single bunk primarily due to concern about landowners’ perception.

“I was afraid that if I took a piece of equipment that size on a 40-acre plot, the landowner would think it is too big,” he says. “It looks big because it is so long compared to a single bunk, but a lot of landowners don’t understand that it is the operator – not the machine itself – that causes damage.”

Dassow talked to a few landowners to try to get a reading on how they would feel about a double bunk forwarder, but did not get a definitive answer. He didn’t think he would have had a problem with the landowner where he was cutting at the time, but “with the next one you never know.”

And with 80% of their work done on private land, and where they make more money, Dassow wants to be sure he keeps his landowners happy. “Profit margins are so thin now. They want the wood — the local mill is looking for wood — but they don’t come up with the price. We make more money on private land because the stumpage is cheaper; otherwise, I probably wouldn’t have bought a new forwarder at this point.”

Logging 80 acres of his own land last year also helped with the overall profit margin. “I made better money because I didn’t have to pay for the stumpage, and it has a lot of oak, which gets a pretty decent price,” he says. “I have more of my own land stuck away for spring break up. This is why I wasn’t worried about making the payments on a new forwarder.”

Still, nothing is free. More time in the woods is the trade-off to staying with the single bunk. Poyda gets ahead of Dassow, who works until he catches up – sometimes 10:30 or 11 at night.

“Jim would rather have me behind a day so I am not right on him, but once you get behind it’s hard to catch up if a snow storm comes or you want to move to the next job. If he breaks down, I help him. If he has to go to town for parts, I just take the afternoon off,” he says laughing.

Time Saver
The squirt boom on his Cat 534 helps him save some time. “That extra five feet makes a difference. I didn’t have it on my last forwarder. When I was sitting at the pulp pile, I couldn’t quite reach the bolt pile, so I had to grab the stem by the end and swing it onto the pile and bump it back in. Now I just extend the boom and drop it on the pile. I don’t have to move as often.”

Operator comfort was a major factor in Dassow’s decision to go with the Cat forwarder. It was important enough to trump a lower price tag on the other forwarder he demoed.  The 6’2” Dassow needs a roomy cab.

“The rows aren’t always straight and I don’t want the blade to hook a tree when I’m pulling ahead, so I just turn around in the seat and drive ahead and swing back again,” he explains. “In the Cat forwarder, there is enough room to swing around in the seat without hitting my knees against the door. Also, in winter I eat my lunch in the cab, so I need the space. The other forwarder I demoed is a nice machine — the quality is there — but the cab was a deal breaker.”

According to Dassow, his wife gave the Cat forwarder’s structure high marks. “The oversized components, especially in the centre section, make the machine heavier but they are built to last and withstand the punishment,” he says. “The way the loader is mounted is structurally stronger, too.”

He likes being able to see the blade and tires from the cab. “In the other forwarder, if I wanted to push a little dirt alongside a stump, I couldn’t see the corner of the blade even if I stood up in the machine. And I couldn’t see where the tires are, unless I leaned way over to the side,” he says, “With the Cat forwarder, I can just be sitting in my seat and see if I’ll rub up against a tree.”

As a driver, Dassow doesn’t pound his forwarder; he eases. “I figure I have more time than money to replace stuff, so I don’t like to beat it.” He says the width (3.2 m with 28L x 26 tires) gives the forwarder stability. “I used to have an Iron Mule, and that was a couple inches under 8’, and boy that was a tippy little bugger. I’d get on a hill or a crater hole and one tire would drop in . . . With this forwarder, I can just idle right through it. It’s a great machine.”

Dassow has a crawler for making roads, but in winter he uses the forwarder so he has the warmth of a cab. He had FABCO customize his forwarder with a 12’ snow blade mounted at an angle to push snow to the roadside. The dealer also widened the bunk and installed extra locks to deter vandals. “That was super. So far the service with Cat has been exceptional.”

Dassow doesn’t have any plans to expand his operation. He’s had problems with chainsaw subcontractors in the past. “I didn’t get the quality I like, and a few told me they had insurance and then a month later I’d find out they didn’t,” he says. “And you can’t afford to put them on payroll, because it costs too much with workman’s comp, Social Security, and you can’t afford to pay them anything.”

But he will continue to upgrade equipment. How long he keeps the Cat 534 will depend on when he pays off the loan and the state of the markets. “If I keep it five years that would probably be the max if the markets are good. I never had a loan go full term since I was 18, and I don’t want it to go full term on this forwarder.”

Dassow hopes to pay off the loan in 24-30 months. “Depends where we are then. I might go to a double bunk by then, because the wife doesn’t really care for me coming home at 10 o’clock.” You can be sure it’s a spec she’ll be looking at carefully next time.

TWICE AS SMOOTH?
In the same neck of the woods as Lorin Dassow, you’ll find George Dalka, 42. The Rhinelander, WI, native is in the cab of a Cat 574 8WD, double bunk forwarder. He works for Tim Jacobs, 37, one of the biggest logging contractors in central Wisconsin. At any point in time, Jacobs is managing four forestry jobs and 15 logging employees – most machine operators and/or truck drivers. 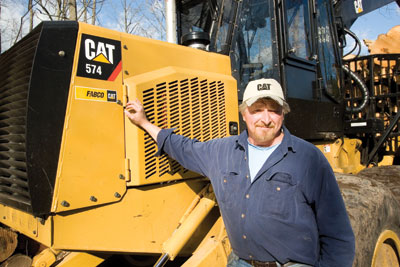 “The cab is a lot quieter, and the heat and air vents are all the way around,” he says. “It’s roomier than other cabs. I can bring a lunch box into the cab. I can spin around in the seat without my feet bumping the walls. I can tighten the armrests into the position I like and leave them there, because when I swing around they don’t hit the sides. I can stretch my legs out, so I don’t get cramps in them.”

Dalka also mentions the benefit of being able to see the blade at all times, even when it is lowered. Structure and power are also pluses. “The blade is more heavy duty. The hood, everything, is stronger. The boom is faster. The whole machine is more stable, more powerful.” 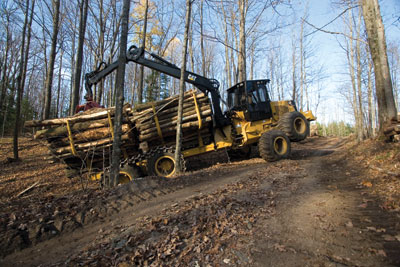 The two additional wheels have given him more comfort and tractive power. “With eight wheels, it’s more comfortable. The ride is so much smoother with the front bogies,” he says. “And I know I never would have climbed that hill today with the six-wheeler. I would have spun out.”

About 65% of Jacobs’ logging jobs are on private land. In his situation, he has not had an issue with landowners’ objecting to bringing a double bunk forwarder on their property. “If our Cat 550 or Fabtek 153 processor goes through, the forwarder will follow,” he says. “If they cut straight enough trails, and the right operator is running the forwarder, we won’t have a problem with the double bunk forwarder.”

The markets are another story. Jacobs agrees with Dassow. “The markets still aren’t the best, but everything is being sold. It’s just not at the price we’d like to see. But we’re working!”

Connie Ness is an experienced forestry writer and PR agent for Caterpillar. She wrote this article exclusively for Canadian Forest Industries Magazine.