Canadian loggers have been facing the music for the past 18 months in this dog of a market. Now, thanks to John Deere, they can also face the work at hand. The global forestry supplier launched its all-new E-Series harvesters and forwarders in Lahti, Finland, in late May, a line of rubber-tire cut-to-length (CTL) gear that includes an isolated, rotating and levelling cab that may change the way loggers look at forwarding for years to come. The E-Series, which will start coming off production lines late in 2008, also includes a wider range of harvester and forwarder sizes, a new approach to on-board support and documentation, a very slick looking new expandable and levelling bunk option, and in several cases, more capacity. To top it all off, it’s packaged in a new hot rod design that gives the machines a look all their own. 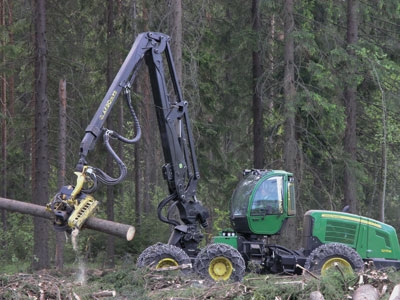 Canadian loggers have been facing the music for the past 18 months in this dog of a market. Now 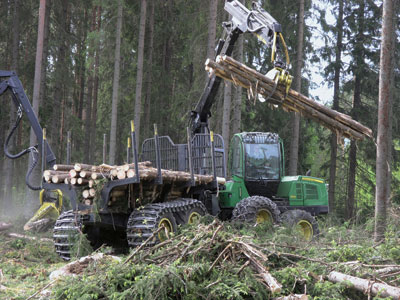 But first, the rotating forwarder cab. This standard feature (levelling is a recommended option) immediately sets the E-Series forwarders apart from other major CTL suppliers, although the concept of a rotating forwarder cab is not entirely new. In North America alone, Tigercat and Timberpro have offered the design over the years (the latter still does), while Pinox in Finland has offered a rotating cab on its combi “harwarder” for years. Still, Deere is the first major manufacturer to build the concept into a full line of forwarders, from small thinning machines like the 810E, to massive m­­­achines like the new 1910E. The cab now rotates a total of 290 degrees, and with the levelling option levels 10 degrees either side and six degrees front to back. 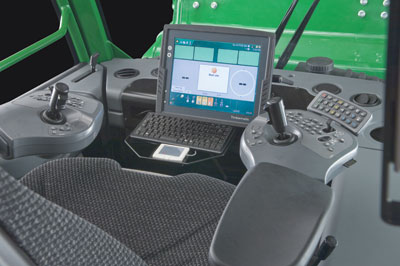 Deere has also separated the cab from the loader in the process, dramatically reducing vibrations and noise for the operator, although the machines are remarkably quiet to stand near in any case. Deere engineers say the largely isolated cab reduces noise levels by 3 or 4 db, while operators are not jostled by boom movements, both of which will make a big difference over the 10- and -12- hour shifts common in Canada.

The machine on active display in the woods near Lahti was a JD 1510E working in large pine and rocky but flat terrain. Travel speed is noticeably higher with the new cab design, but it’s when loading that the new cab shines. The cab automatically, but smoothly, follows the boom movements, so the operator is always facing his work without twisting his neck or torso, or swinging the chair around. Deere claims this will lead to improved productivity over a shift, and it’s not hard to see why.

The 1510E we saw working sported a standard bunk, but the machine unveiled the night before at Deere’s official launch had the all-new hydraulically expandable and levelling bunk. The optional system allows an operator to seamlessly adjust both the dimension and shape of the load: Narrow and high for thinning or wide and short for clearcuts or on slopes, for example. And just to make sure eager Canadian loggers don’t try both – wide and tall – the bunk features a scale system so operators take a full load without overloading. Unfortunately for Canadian loggers, forwarder product marketing manager Jari Mennala tells CFI that the ALS (Adjustable Load System) will not originally be available in North America. Perhaps Canadian loggers and dealers need to show enough interest in the system to have it sold on this side of the Atlantic?

Forwarders will still be powered by Deere engines of course, and a new transmission design allows for 10% more tractive effort in all models.

Improved harvesting
CFI also saw the new 1270E harvester working, although the E-Series will eventually include the 1070E thinning machine and 1470E final felling and large timber harvester. Changes here are not as obvious, but include an improved cab levelling and rotating system, with rotation now at 160 degrees and levelling to 17 degrees side-to-side and 10 degrees fore and aft. The harvesters also use the same Deere-made cab as the forwarder. In fact, components, controls, and software are as identical as possible, allowing operators to jump back and forth between harvester and forwarder as painlessly as possible. As in the forwarder, controls have been placed for ergonomics, and low windowsills and arc-shaped windows maximize visibility.

The measuring, control and automation systems have also been improved. For starters, the TimberMatic system software has been made more user-friendly, and a single program allows operators to adjust all settings instead of the three required in the D-Series. It’s all a recognition that machines need to be easier to use in the face of chronic operator shortages in just about every key market. In this vein, trouble-shooting and all required maintenance documentation is now available from the on-board computer.

Speaking of training, Deere has released a completely new simulator for both harvester and forwarder to go with the E-Series, with better graphics and more options for terrain and timber types. Trainees can customize their terrain, and will be using identical automation and optimization software to that used by the real machines.

The 1270E sports an all-new CH7 boom with higher lifting and slewing torque, yet according to Deere is more agile for select cutting. It also boasts very impressive reach numbers, out as far as 11.7 m (38.4 ft). It is available with a variety of head options, including the lightweight, narrow-profile H414 we saw being unveiled at the ceremony.

The E-Series will be unveiled at forestry shows around the world this summer, with the first models available in late 2008 or early 2009. You can get your first peak at the E-Series and rotating cab forwarder at DEMO 2008 in Halifax, NS, this September (see preview on page 24), or just over the border at the Lake States Logging Congress in Green Bay, WI. In the meantime, videos, stats and more are available at www.deere.com/forestryrevolution.