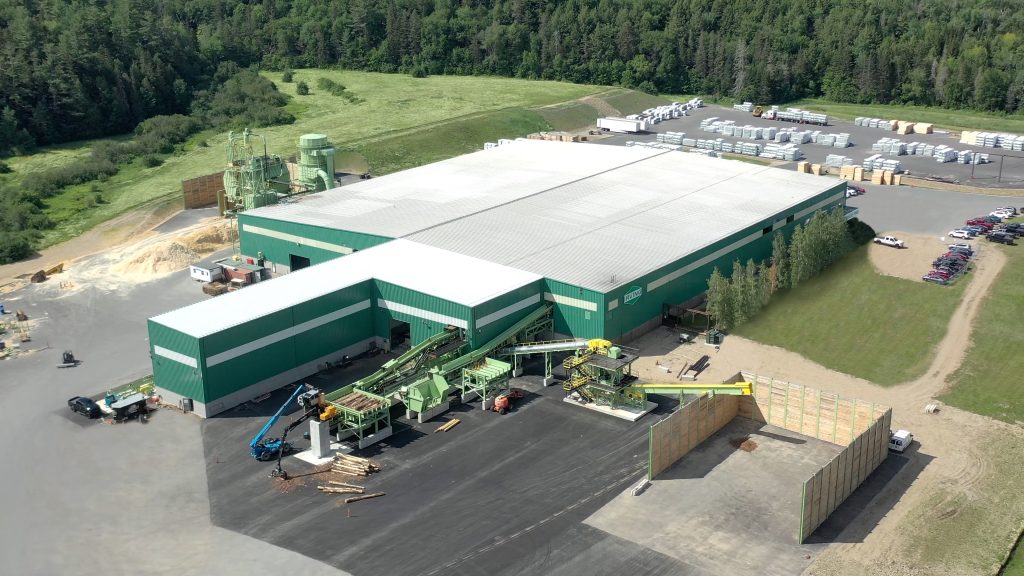 Doaktown, N.B., has been home to a sawmill since 1924. J.D. Irving, Limited bought the mill in 1987, and has since made multiple upgrades, adding a value-added centre including a new biomass boiler, kilns, planer and rip lines. In 2016, the company added a paint line, and installed an automatic grade scanner in 2018.

In September 2020, construction began on a $35-million modernization and expansion project that saw the mill leap ahead decades in technology improvement.

The white pine mill, which employs 135 people operating a single shift, produces 35 mmbf annually, turning out products ranging from four to 12 inches in width, six to 16 feet in length and four-quarter to eight-quarter in thickness.

About half of those products go to the U.S., while 40 per cent goes to the domestic market and another 10 per cent is exported overseas, explains Susan Coulombe, general manager of J.D. Irving’s pine division.

The fibre for all those products comes from J.D. Irving’s nearby free-hold and Crown licenses, along with wood purchased from local suppliers.

In order to take advantage of that fibre supply, a new mill needed to be constructed with the latest automation and optimization equipment.

The company partnered with the BID Group on the project. However, COVID-19 meant rethinking some aspects of the project.

“Throughout the construction, we were very careful around all of the COVID protocols and managing different contractors,” Coulombe explains.

To ensure employee and contractor safety, J.D. Irving used proximity sensors, which were paired to an employee’s ID card, so they could track everyone’s locations in the event of a positive COVID-19 case.

The company also had separate facilities for all the contractors, including separate lunchrooms and breakrooms.

“We really worked very hard to maintain social distancing and keep everything separate and isolated,” Coulombe says. “It was quite a challenge, but the team did an excellent job. Not only did we not have any COVID cases, but we also did not have any injuries during the entire process and start-up.”

The new mill successfully started-up in July 2021, and the old mill was officially decommissioned on August 20. 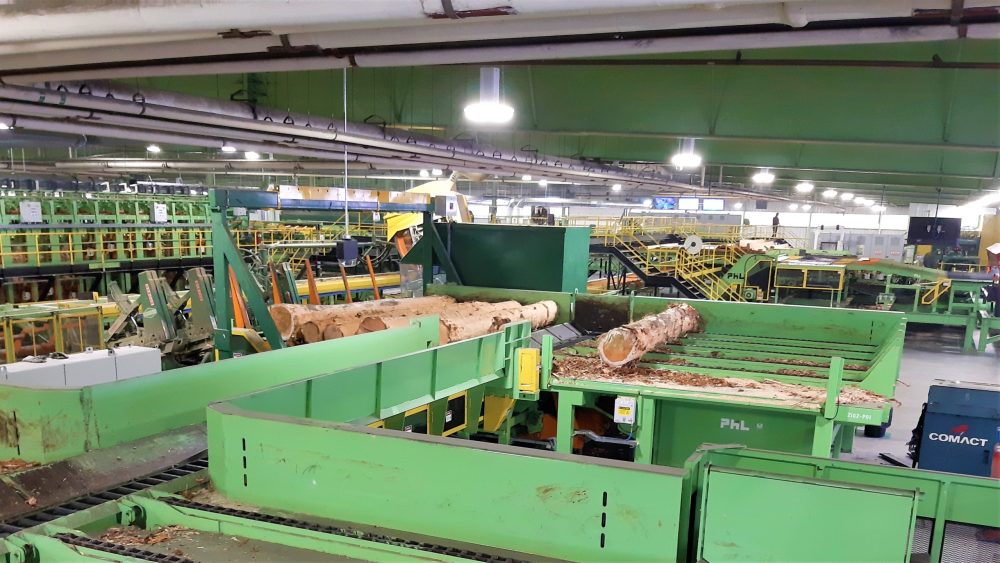 JD Irving installed a four-saw stacked horizontal resaw from PHL and a Comact TrimExpert trimmer as part of the upgrade at the mill. Photo courtesy J.D. Irving.

The new mill is now under the same roof as the planer mill and value-added centre. J.D. Irving added 14,000 square feet to the existing building to accommodate a new Nicholson A6 debarker and a fully automated MoCo stacker. The mill and the value-added lines are now side-by-side, in a U-shape.

Coulombe says the impact is already being felt at the mill.

“The changes are remarkable,” she says. “We’re able to have thinner kerf, better bandsaw technology so we can have a lot less sawing deviation, and we can reduce our target size.”

The fully automated stacker has resulted in improved piling and stickering, which will reduce the mill’s drying defects and trim loss, she adds. And, thanks to the new scanner at the edger and the trimmer, the mill has multiple options for different sawing profiles depending on customer needs and market conditions.

“We expect an increase of about 10 per cent in yield from the automation, thinner kerf and better stacking,” Coulombe says.

Until this upgrade was done, grading was manual and lumber handling was labour intensive. So, there was a learning curve with the new automation technology, Coulombe says.

“Obviously, when you put in any scanning technology, no matter how much technology you had before, there’s tweaking and learning to be done with that. But everybody adapted quite well, and we get comments from the employees saying they can’t believe they work in such a nice environment.”

“The employees have come along well,” she continues. “Our management team did a great job in developing training protocols and procedures. As we were building, we tried our best – and again, COVID made it challenging – but we tried our best to bring employees through so they could see it and get familiar with it.”

The new automated equipment has also helped the mill respond to labour shortages.

“Before, we were always short people, and now the equipment has allowed us to fill those gaps,” she says.

“Obviously, the older mill was much more labour intensive. A lot of those jobs, they weren’t very ergonomically friendly, to say the least, and everybody knows how challenging finding labour is. It was next to impossible to find people that were willing and able to do that kind of physical labour,” she adds.

Given this, Coulombe believes automation is the way of the future.

Highly automated equipment will also help the Doaktown mill navigate the ups and downs of the lumber market, which has seen record-highs in the past year-and-a-half.

“It’s been a rollercoaster,” Coulombe says. “Last winter, we were struggling to keep up, and then this summer it was a big correction, and now it’s starting to ramp back up again.”

This has made it difficult to do proper market forecasting and planning, she says.

“But, at least now we’re able to try to optimize because we can better predict what’s going to come out the other end, and we can better control what we’re going to make.”

The new equipment will also help the mill get into more niche markets that previously presented challenges because of how quickly customer preferences changed, Coulombe says.

“When you have people manually making decisions, it’s just not realistic to expect them to be able to change as quickly as customers need change,” she explains.

Looking ahead, Coulombe says there will also be more opportunities for the mill to focus on improving the value and yield of the products produced in the value-added centre.

“Now that we have technology from one end to the other, we can really focus on getting the right piece in the right bucket all of the time,” she explains. “Customer trends will change, but because now we’re automated right back to the log, we can make sure we’re doing the right thing right from the first time we put a saw in it.”