The much-anticipated lumber super cycle is still in the cards, the question is only that of timing. Global softwood lumber markets are gradually returning to health. While the rapid rise in lumber prices in the first four months of the year brought a flurry of euphoric mainstream media references to an emerging “super cycle,” the reality is that the expected peak of a super cycle is still two or three years away.  Lumber demand is expected to  grow over the next five years, driven by U.S. housing starts and strong export markets, where supplies will gradually (albeit unevenly) follow. But the question is: will there be enough logging and sawmilling capacity to meet the potential demand?

Global log supply
In short, a lumber super cycle differs from a normal recovery in that we’ll see a flat (or even declining) global log supply occurring at the same time as global wood demand hits new highs. More specifically, the supply constraints revolve around a number of structural changes:

Taken together these factors are creating a much more restrictive log supply at both the regional and global level.

Rebounding demand
Against these supply constraints, U.S. demand started to rebound strongly in early 2012 with prospects that housing starts will double from 2011 to 2016/17 (780,000 units to over 1.5 million units). At the same time, China has been a new market force as it has searched for new sources of logs and lumber to replace Russian logs as the economy continues to expand. Japan consumption has also increased recently, partly due to a mini-boom in home construction prior to the consumption tax increases scheduled for April 2014. Throw in the rising imports in a variety of other traditional as well as emerging markets coupled with an eventual recovery in Europe, and the prospects for lumber producers and exporters looks spectacular.

A general upward trend in lumber prices could last up to five years as the U.S. housing market and global economy recover, and as a constrained North American forest industry tries to rebuild its supply chain and expand to meet what is expected to be steadily growing demand. As prices rise and timber supplies tighten, new wood sources (such as exports from Europe to the U.S.) and wood and non-wood substitutes are forecast to emerge to fill any short gaps in U.S. lumber demand. If the tension in timber supply and lumber production remains tight, then lumber prices will hit all-time highs as early as 2015.

Market volatility
Over the next two or three years, supply chain bottlenecks and market demand wild cards will ensure dramatic market volatility, such the upswing (and subsequent tumble) in lumber prices observed in the first half of 2013. In addition to log shortages that will occur as contractors ramp up production, shortages of trained labour as well as available railcars and trucks will also have an impact. On the demand side, more traditional factors influencing prices such as domestic weather patterns and inventory levels at foreign ports will also impact prices. Short-term shortages and/or supply gluts will certainly result in a gut-twisting roller-coaster ride for lumber prices.

Volatility will be a major concern for businesses throughout the supply chain. Both North American lumber distributors and importers of European lumber will need to avoid getting stuck with high-priced inventory during cycles of declining prices. In fact, this uncertainty could slow Europe’s return to North American markets.

Such volatility will make doing business more challenging; however, the overall outlook is definitely positive. An outlook for multiple years of growth for North America, steady consumption in Japan, a strong likelihood of continued growth in China, and an eventual recovery in Europe indicates that markets will generally be on an upward trajectory for several years.

Alice Palmer is a consultant and Russell Taylor, president, with International WOOD MARKETS Group, Vancouver, BC. This article was written exclusively for Canadian Forest Industries, and was summarized from WOOD Markets Monthly International Report (May 2013) and the WOOD MARKETS May 2013 Global Softwood Log & Lumber Conference. International WOOD MARKETS Group Inc. is Canada’s largest wood products consulting firm. Its consulting team has provided industry and market expertise in the solid wood products field to its clients since 1993. The company provides market research, new business development and business plan/strategy as well as other consultative services to wood product companies in North America and around the world. The firm also publishes a number of strategic industry multi-client reports including its landmark WOOD Markets Monthly International Report (since 1996) and monthly China Bulletin. Further information is available on www.woodmarkets.com. 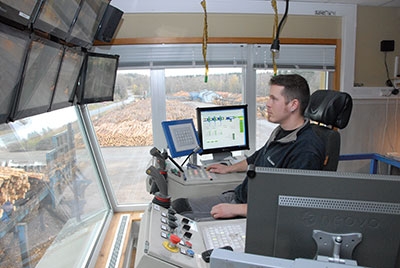 Lumber supply constraints and record pricing will entice European producers back to the U.S. market The much-anticipated lumber super cycle is still in the cards
Print this page