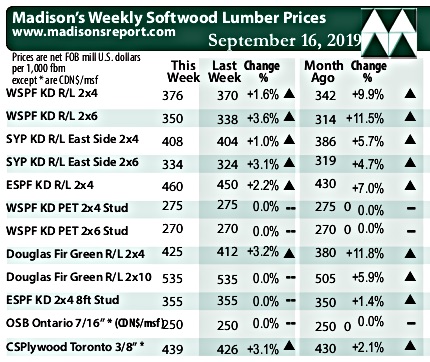 Sawmillers and loggers alike breathed a sigh of relief last week as North American construction framing dimension softwood lumber prices stopped falling, with several key items recovering from recent lows. Production curtailments over the 2019 building season did well to keep supply tight enough for sawmills to push their order files into October; four weeks is a nice healthy time frame for the beginning of autumn. Lumber sellers reported customers reluctant to buy anything beyond immediate needs, but that trepidation did nothing to get lower price quotes from sawmills. All eyes are now on U.S. Thanksgiving, which usually signals the end of building weather and the beginning of true annual slow-down for forest operators. Keep reading to find out more.

After terrifying drops this summer, lumber prices are slightly up from last week. This week’s benchmark lumber commodity Western Spruce-Pine-Fir KD 2×4 #2&Btr price was U.S. $376. After a big jump over one-month-ago last week, this week’s price is up another +$6, or +2%, from one month ago. Compared to one year ago, this price is down -$100, or -21%.

Studs producers in British Columbia noted that sales of WSPF studs market wasn’t quite as crazy as that of dimension, but late-September stud production order files prevailed. — Madison’s Lumber Reporter

There was a lot of new inquiry for WSPF producers in Canada last week, especially after West Fraser announced Monday that it will begin variable operating schedules at five of the company’s B.C. sawmills, resulting in an estimated reduction of its current capacity in the province by 15-25 per cent. The announcement is the latest in a barrage of curtailments and closures in 2019 due to weak markets and pricing. Sawmill order files now stretched into the week of September 30th on most items.

Eastern Canadian lumber purveyors reported scurrying activity among buyers, following another batch of curtailment announcements out West. Secondary suppliers continued to get more attention from customers, due to quicker shipment and marginally lower prices. However, sawmills also got more business each day as distributers and wholesalers ran lower on volume later in the week. Producers extended their order files into late September, with a few almost into October.