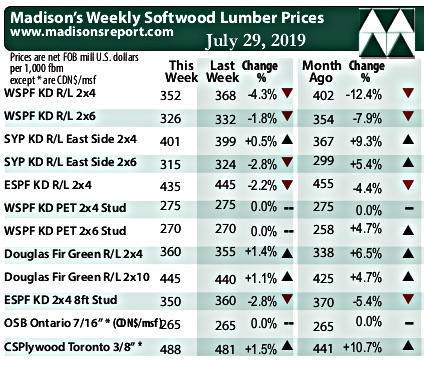 North American softwood lumber traders on both sides of the border described sales as sloppy and “uninspiring.”

Demand was lackadaisical at best and disinterested at worst. While home construction and sales activity in the U.S. is slowly improving, there has been no increase in demand since the large sales volumes of one year ago. Operators in Canada have made more inroads to selling lumber products into new and emerging markets, specifically Korea and Taiwan. At the same time, however, EU exporters of spruce lumber have almost doubled their sales into the U.S. in the past year compared to historic volumes. Now that their product has consistently met standards and has been accepted by the marketplace, expectations are for those U.S. imports of EU spruce lumber to increase sharply in coming years.

According to Western Spruce-Pine-Fir purveyors in the U.S., last week was another example of the muted demand that developed over the month of July. Consumer confidence remained low and customers weren’t interested in buying lumber any further out than one or two weeks, which also happened to be the length of reported sawmill order files. Further price reductions enticed pockets of buyers each day, but overall business was uninspiring.

Sawmills in Eastern Canada noted that they didn’t have oodles of volume committed for production when they come back from the fortnight break. — Madison’s Lumber Reporter

WSPF sawmills in Canada got more of the same from customers last week. Buyers were cautious, demand muted, and sawmill order files were seldom more than one week. The odd producer reported marginal log supply problems due to rainy weather, but transportation and fibre supply were generally non-issues. Sales activity was lacklustre. Lower asking prices did little to cajole customers into buying.

The below table is a comparison of recent highs, in June 2018, and current July 2019 benchmark dimension softwood lumber 2×4 prices compared to historical highs of 2004/05 and compared to recent lows of Sept. 2015: