Big changes have been taking place at the L&M Lumber and Nechako Lumber complex in Vanderhoof, B.C. since the mills set out on the upgrade road in 2005. The latest projects, which were completed in late 2007, include the addition of automated grading systems on the production lines. This technology from Comact helps the mills capitalize on earlier upgrades that featured a new Comact Optimized Length Infeed (OLI) line at L&M and a Gilbert ‘3000 Feet’ planer at Nechako. L&M is the sawmill part of the complex while Nechako is the planer side of the business. Both mills are located on the same site. 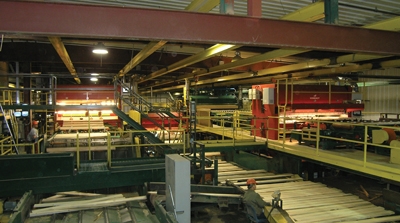 The budget for the OLI line, which replaced one of the existing sawmill lines in the three-line mill, was $10.5 million. When completed in late 2005, the new small footprint OLI line joined an existing small log line that features a HewSaw R115, and a large log line equipped with a Comact CETEC vertical twin band saw along with a Ukiah vertical arbour edger. In 2006, the three sawmill lines benefited from upgrades to the mill’s debarkers as a pair of Nicholson A5 units were replaced with two new Nicholson A8 22 inch models.

The new Gilbert planer was installed around the same time as the Comact OLI line in the sawmill. The budget for the planer and a new bag system from Skeena Blower in Smithers, B.C. came in at $4.7 million – $4.3 million for the planer and $400,000 for the bag system. The mill installed the new OLI line and the planer with the goal of increasing production volume to over 200 Million BF per year with a maximum annual capacity target of 250 million BF in mind.

The Comact automated grading systems that are part of the latest upgrades are designed to increase the percentage of the mill’s production volume that will make the grade for the Japanese market, which demands a higher quality product. Despite the challenge of dealing with incoming logs that are decreasing in value and quality as a result of the Mountain Pine Beetle (MPB) infestation that has severely impacted the region’s fibre basket, the new grading equipment has allowed the mills to double their Japanese export volume, which was about 15 per cent of total production volume prior to the upgrades taking place.

The grading system project involved five phases and brings the total number of Comact transverse systems with vision in the Vanderhoof mills to four, including three GradExpert systems and one EdgExpert system. L&M and Nechako are locally owned in partnership with Prince George, B.C.-based Sinclar Enterprises, which has other mills in the region. At Sinclar’s Lakeland Mills in Prince George they have installed two GradExperts and one EdgExpert, while at the Apollo mill in Fort St. James, they just installed a Comact SortExpert in February of this year.

The EdgExpert is a true shape and colour vision board edger optimizer that features accurate detection of knots, stain, splits and wane, while the SortExpert presorts boards in the sawmill, making the planer operation more efficient.

Phase one of the latest automated grading system upgrade at Nechako and L&M got underway in March 2007 when Comact installed a precision trimmer in the planer mill with two saws capable of processing 220 pieces per minute while keeping to a tolerance of within 0.5 mm. The second phase of the project occurred a month later, in April 2007, and included the installation of an inclined GradExpert, a paddle fence with a defect saw, and a 13-bin sorter on the mill’s main export planer line. Phase three, in May 2007, saw the mill install a flat GradExpert on the planer mill’s stud line. Phase four was in June 2007 in the L&M sawmill with the installation of an EdgExpert for optimizing the edger, while the final phase was completed in November 2007 with the installation of another GradExpert, this time on the planer mill’s trim line.

All of the grading system installations at the Vanderhoof facility were completed by Salem Contracting Ltd. in Prince George and internal crews at L&M and Nechako. Independent sawmill consultant Roy McCaig and staff at Comact were also involved in the project.

L&M and Nechako produce 1×3, 1×4, 2×3, 2×4 and 2×6 sizes in short products and studs up to 8 ft. in length. The Vanderhoof site also houses a pellet plant called Premium Pellet, which produces wood pellets as a by-product of the sawmill and planer mill for use in wood stoves, other heating devices and industrial power generation. Sinclar Enterprises handles the sales and marketing of the L&M and Nechako products, which in addition to being sold into the Japanese market, are sold in the U.S. and Canada.