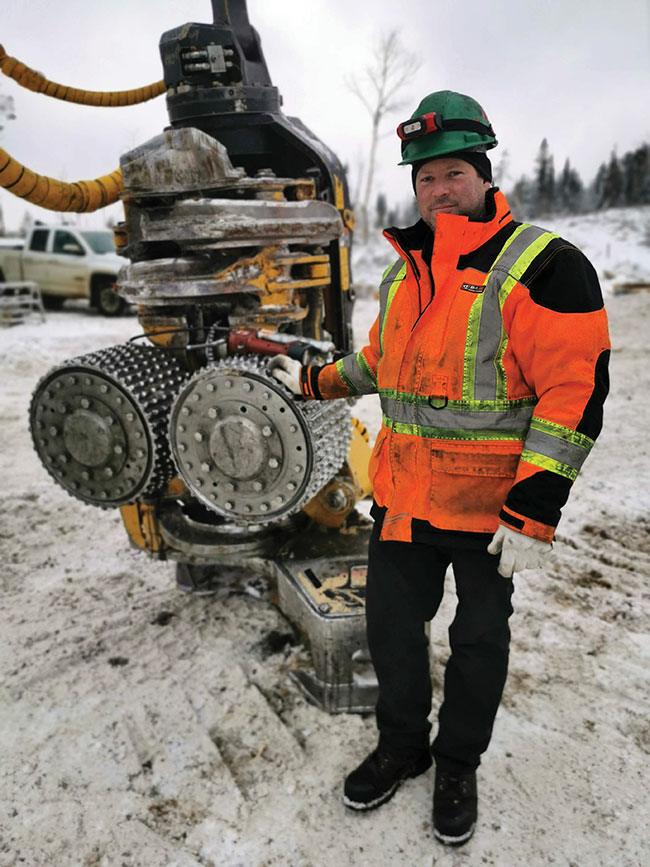 Sébastien Létourneau, owner of Enterprise Forestières SL, uses an original harvesting technique. A saw head cuts down the trees, which are then cut into logs by two multifunctional harvesters. Photo courtesy Guillaume Roy.

When Antoine Langlois founded Forex Langlois in 2005, a key competitive advantage was the company’s focus on maximizing the value of each log they harvested.

It’s the end of January. Three forestry entrepreneurs are hard at work harvesting 30,000 m3 of wood in the Lac-à-Beauce sector in Mauricie, Que., a cutting region that has been ignored for years by the forestry industry.

“The area is hard to access,” explains Antoine Langlois, owner of Forex Langlois. “But once you get onto the plateau, the wood quality is great. We should be able to harvest 10,000 m3 more than we initially planned.”

Judging from the size of the trees stacked in the cutting area which overlooks Lac-à-Beauce, Langlois may have a point.

Meanwhile Bobby Lemieux, co-owner of Forestier Lemieux (a Forex Langlois sub-contractor) with his brother David, is trimming large hardwood and softwood logs with his John Deere 2154, which is equipped with a Propac delimbing head.

Lemieux does not even stop production to fix old equipment.

“We change our machines every two years to maximize productivity,” he says. “Adopting state-of-the-art technologies is also energy efficient.”

When Forestier Lemieux upgraded to a Tigercat X822D feller buncher back in 2019, their output increased and fuel consumption fell from 56 to 36 litres per hour. Forestier Lemieux’s Tigercat 635 skidder is also generating fuel savings.

“I’d rather spend 12 hours operating equipment than eight hours fixing it,” explains Lemieux. “Using new equipment costs the same as running older models, but production is much more stable. That means the trucks get loaded faster.”

Further on, Sébastien Létourneau, owner of Entreprises Forestières SL (another Forex Langlois sub-contractor) and his team are using an original harvesting technique. A feller with a Tigercat 570 head cuts trees, while a pair of multifunctional Tigercat 870C feller bunchers follow in its wake, cutting wood lengthwise. The wood will later be loaded onto two accompanying forwarders.

Langlois says businesses must innovate their production techniques to respond to a lack of experienced personnel in the industry.

“It’s hard to train good operators who can work at night on partial cuts,” he says, noting that 60 per cent of the company’s volume falls into that category.

When Langlois started his company in 2005, armed with just a single chainsaw and a skidder, his goal was to get the most out of every log. Optimal wood sorting is one way he has accomplished this.

“Effective wood sorting generates more value and is one of the key reasons that we are able to increase the compensation of our forestry sub-contractors,” he explains. “To get better margins you need to work hard and be meticulous. Carefully inspecting and sorting wood cuts is part of that process. We can sell high-value logs used to make pianos for as much as $1,500/m3 while other pine logs end up as poles used by Hydro-Québec.”

If he can’t sell logs at a fair price to local customers, he does not hesitate to ship his wood to Beauce, where sawmills are more used to negotiating deals at fair market value.

To accommodate the work, Forex Langlois built a four-hectare sorting area in Xylo-Carbone’s lumber yard in Saint-Tite, Que. A second sorting area in Lac-aux-Sables, Que., is also in the works.

“Our supply guarantee provides us with a direct relationship with the Ministère de la Forêt, de la Faune et des Parcs (Ministry of Forests, Wildlife and Parks) and access to their forest planning data,” remarks Nikita Touchette, Forex Langlois’s director of operations. Knowing which forest rights will be auctioned off by the Bureau de mise en Marché des bois (Wood Marketing Bureau) enables Forex Langlois to do advanced prospecting, predict needed paths and roads and evaluate how much the rights are worth.

Forex Langois invested more than $1 million in infrastructure including building a logging road in Lac-aux-Sables, an adjoining forest camp (using Roulotte RL equipment), a new garage and administrative office, in order to be able to access and harvest the wood in the area.

GFM, which enables all beneficiaries to access fibre at a better price, has helped double Forex Langlois’ business volume in just three years.

Indeed, in the 15 years since the company was founded, the number of employees has risen to 75, and annual revenues have shot up from $60,000 to $17 million.

According to Langlois, the Bureau de Mise en Marché du Bois, which auctions 25 per cent of harvesting area rights, provides a great business opportunity for the company, which harvests about 100,000 m3 from these contracts and adjoining private land each year.

However, with operating costs constantly increasing, Langlois believes the future of his business will continue to hinge on his ability to create more value from each tree.

At a glance …
Forex Langlois offers turnkey planning, road construction, harvesting and transportation services.
The company builds 150 kilometres of roads each year. Below are some of the key pieces of equipment that Forex Langlois operates:

Forex Langlois harvests more than 300,000 m3 each year. The contractors that work for the company use: