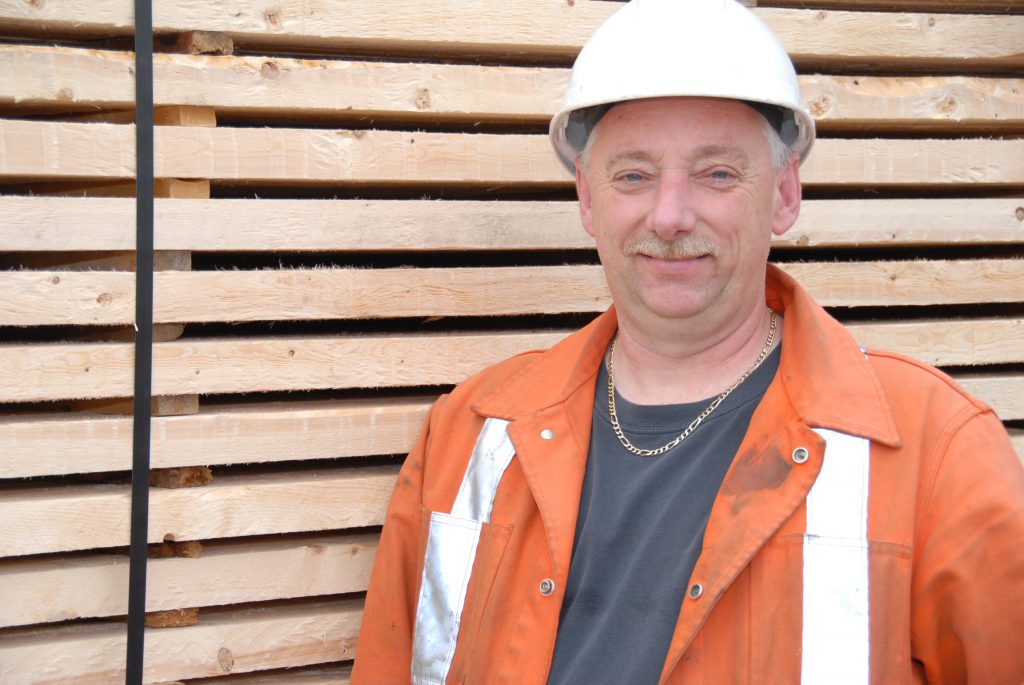 Kevin Sexton with rough lumber in the mill yard. “The planer mill project has worked out really well for us. We couldn’t have survived without it Sexton Lumber rebuilt its planer mill

Newfoundland sawmiller Kevin Sexton is generally enthusiastic about the tactics and technology his mill has adapted to survive and sometimes thrive despite ugly U.S. lumber markets over the past few years. If you really want to get him worked up though, ask him about the planer mill rebuild completed early in 2010.

“It is basically a new planer mill. We kept the planer (Stetson Ross 20 knife) and trimmer, but everything else is new,” he says of the latest project at Sexton Lumber in Bloomfield, Nfld. “We took a new approach right from the infeed, with optimization and controls right through, and the payback has been great.”

Feed just right
As Sexton says, the rebuild starts at the infeed, where a basic dual tilt hoist chain infeed has been replaced with a lug loader infeed with one of the first wane-up systems east of Quebec City. The Carbotech wane-up system uses VAB Solutions scanners to determine wane. The wane-up system works by accelerating the boards to the back of the previous lug where they are turned as required by flags that come out through the chains. The relatively low speed of these flags compared to the chains provides smooth turning with no risk of marking or overturning the pieces.

“It turns every piece of lumber so that the wane side is up, which of course improves our recovery,” Sexton explains. “It allows us to take the smallest amount possible off the bottom of the board and a little more off the top, which removes the wane. Turning the boards manually, we could only get wane-up about 60% of the time and after we saw this system in a mill test, it was a must for us.”

Controls for the planer mill infeed are from Quebec-based DO2, and Sexton adds that an unexpected benefit from the upgrade has been higher, more consistent production.

“Now we’re controlling the pace to the pineapple feed rolls. Before we were either starving the planer at times, or were putting so much lumber to it we were causing jams. Now the flow is always just right, and it hums along. The difference is unbelievable.”

New optimizer
Following the planer is a new Lineal Grading Optimizer from VAB Solutions. Sexton Lumber is no stranger to planer mill optimization, having installed one of the very first systems in eastern Canada. Yet the original Optifor system was very difficult to program or change parameters, and the results were not trustworthy enough to go graderless, a main goal in most such projects.

Click HERE to view a video of the optimizer at Sexton Lumber in action along with the rest of the planer mill.

“We simply couldn’t survive the way we were. We couldn’t keep up with our new production goals (the mill added a second HewSaw line in 2010), but most importantly we needed to get better value recovery from the lumber, and we had to reduce manpower requirements in the planer mill. We also had a special niche we could meet in the booming Newfoundland housing market, but to do so we needed to be able to customize our grading rules.”

The management team had seen the VAB Solutions system, and liked the compact size and simplicity of the design, without moving parts. They had also been working with VAB president Jean Berubé on keeping the old system working, and liked the working relationship. Sexton said all these instincts proved correct.

“We put the new system in late November 2009, and we told Mr. Berubé that we wanted to be graderless within a short period. VAB wanted us to be comfortable with the system first, make sure we felt good about the grading decisions. I hate waiting,” he adds with a laugh, “so three days later when we had an MLB inspector in for a courtesy visit and he was happy with the grades, we pulled the graders the next morning.”

Sexton even removed the grade mark reader that day, a decision his controller reversed the next day.

“Neil Greening, I refer to him as my Finance Minister, he suggested that if something went wrong with the VAB system, we’d be in a bad spot without that reader and manual grading to fall back on, and so I put it back in that night. I wasn’t happy about it, but I could see his point. Well, six months later, he reviewed the performance numbers from the new grader, and he said I might as well pull the reader back out. The gains from optimized grading were so significant that he said we’d be better off shutting down until the system was fixed than going back to manual grading.”

Greening adds that the ROI on the new system was impressive, even for a mill producing in the 60 million bdft range (single shift). “The payback was 17 months – we’ve seen an amazing increase in accuracy and in our percentage of premium product, and a corresponding drop in our no. 3’s and outs. I don’t say this often, but the entire project exceeded our expectations.”

Following the optimizer are the existing pair of three-saw TS Manufacturing trimmers, which continue to keep pace with the flow, then a new Carbotech 20-bin sorter and the original T.S. Manufacturing stacker line. DO2 controls are used throughout the planer mill.

Proof in the package
Sexton says that even after almost three years, the MLB inspectors continue to be pleased with the quality of their lumber packages. “I believe they have tried especially hard to find flaws as we were one of the first mills in the east to go graderless, but we have not failed an inspection. More importantly, we consistently see three to four percent under-grade, which is by design, so the bottom line is as good as it gets.”

The mill has also used the new system and its simple interface to create niche grades for local homebuilders. Over 50 percent of Sexton Lumber’s production serves the local market, fueled by a booming oil patch. Some of these builders are looking for a package that is somewhat better quality than a No. 2 and better package.

“When we first met with VAB about the system, we said that the interface had to be simple enough for us to run, and we needed to understand it, and feel comfortable customizing the grade rules ourselves, without programmers. The old system was so complicated that we had to pay a programmer every time we needed even a small change. This is so simple, we just go in and fine tune grades as required, and only once have we needed some input from VAB when we added a new green product.”

In the case of their local builder, they simply tuned the parameters to remove the lower end of the No. 2 and created what they call a “local premium” grade that allows a higher return and a loyal client base.

“We’ve found markets for the rest, and we’re even pulling three of four different grades in our 1x3s. It’s so easy to adjust, we’re not shy to experiment with grades to see what we can come up with for the market that adds value.”

Since Sexton’s install, several other sawmills in Eastern and Central Canada have installed or ordered similar systems from VAB Solutions, including both random and stud mill systems at Eacom in Nairn Centre, Ont., a stud application at Fornebu Lumber in northeastern NB (click here to read the full story on this high-speed mill), and Norsask Forest Products in Meadow Lake, Sask.