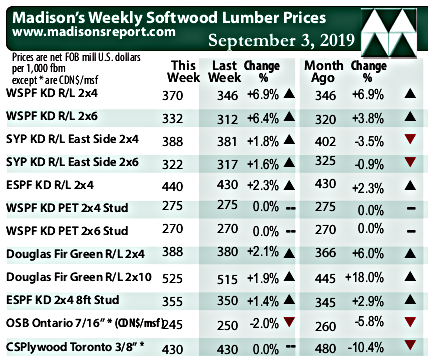 “But for how long?” asked Madison’s Lumber Reporter Tuesday as the ups-and-downs of North America construction framing softwood dimension lumber prices for 2019 remain baffling. A good look at the latest U.S. housing starts and home sales data – coming this week from Madison’s – shows continued strong increases. Indeed, U.S. ‘homes for sale inventories’ are decreasing steadily even as house prices push further upward. So why does the lumber market seem so soft? Keep reading to find out more:

A number of British Columbia sawmills noted that, even with the disappearance of a sizeable contingent of players for Labour Day, they achieved sales at their higher numbers quickly and easily. – Madison’s Lumber Reporter

Producers of kiln-dried Douglas-fir dimension lumber enjoyed another strong week of being “definitively in the driver’s seat”. Buyers were in the mix every day, keeping suppliers busy even during the lead-up to Labour Day. Sawmills now had order files into mid- and late-September on all commodity items. With the impressive recent rally in green Douglas-fir prices, dry fir commodities were now finding their way into a few Southern California markets at a discount to green on a delivered basis.

In Eastern Canada, brisk sales of Eastern Spruce-Pine-Fir allowed sawmills to extend their order files into mid- or late-September. The flurry of buying activity slowly died down as players filtered away on Thursday and Friday for the holiday weekend, but a resounding sense of optimism remained. After seeing the quick shift in the market, a considerable amount of buyers booked orders to fill in their nearly-depleted inventories.

The below table is a comparison of recent highs, in June 2018, and current August 2019 benchmark dimension softwood lumber 2×4 prices compared to historical highs of 2004/05 and compared to recent lows of Sept 2015: