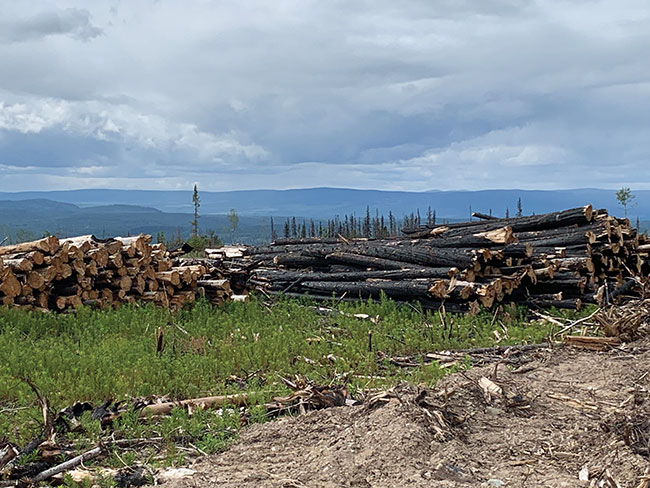 Some of the decked burnt wood in the Cheslatta Community Forest. Photo courtesy Gordon Pratt.

The 2017 and 2018 wildfire seasons in B.C. were among the worst the country has ever seen. While this year has thankfully seen fewer wildfires in the province – so far – the impact of previous wildfires is still being felt by communities and loggers alike.

Cheslatta Carrier Nation near Burns Lake, B.C., and the logging company they own, Cheslatta Forest Products, are among those still feeling the effects of wildfires. In 2018, wildfires burned 75 per cent of the Cheslatta Community Forest and the surrounding timber area, making much of the stands uneconomical to harvest.

Project proposal
The wildfires “brought about a lot of uncertainty, of course,” Ben Wilson, forestry co-ordinator for Cheslatta Carrier Nation, says. “It definitely impacted the long-term prospects of a business. You have to readjust; you have to reinvent what you’re doing – how you’re going to deal with the burnt wood and how you’re going to get that off the land.”

So, Cheslatta Forest Products came up with a plan: in November 2018, they applied to the Forest Enhancement Society of BC (FESBC) for funding to rehabilitate burnt stands in the Cheslatta Community Forest and the surrounding areas in the Burns Lake Timber Supply Area. This would be accomplished by harvesting the burnt timber, which would then be trucked to nearby pellet plants or sawmills, and replanting the area.

Ultimately, FESBC agreed to provide $1.25 million in funding and partnered with Cheslatta Forest Products on this project.

Before work could begin, however, FESBC had to ensure that all parties that needed to be involved were part of the planning process, Pratt says.

“We’re basically the background quarterback to ensure all and any concerning issues would be addressed and implemented,” he explains. “Then, we monitor and ensure they meet the objectives of the project.”

The partners then had to identify appropriate areas to harvest and reforest.

“Probably one of the biggest challenges was ensuring that our treatment units are selected on areas where the other forest licensees aren’t interested in the fibre,” Pratt explains. “We do not want to be funding treatments of areas that are economical to harvest and reforest. It’s a fine line, after a fire, with regards to what is economical and what isn’t. We worked with Cheslatta and the province to ensure that our area selections are uneconomical.”

Harvesting operations
Once the area selections were finalized, harvesting began on March 1. Around 350 cubic metres of burnt wood is harvested per day, Wilson says. For this project, they plan to harvest 250 hectares this season and another 200 hectares in 2021-2022.

The fibre that is taken out of the forests is a mixture of sawlogs and biomass logs. Most of it is being trucked to Pinnacle Renewable Energy’s pellet plant in Burns Lake, while some of the sawlogs go to nearby sawmills.

Overall, the project will utilize 30,000-40,000 cubic metres of fibre that would otherwise be burned, Pratt says.

Cheslatta Forest Products is using its own equipment for the project – all John Deere feller bunchers, skidders, processors and loaders. Relying on one brand of machines is a conscious choice for the company. A few years ago, they went through the process of selecting an equipment partner for all of the industrial activities the company does, Wilson explains.

“Brandt Tractor, the dealer for John Deere here in this area, was the successful proponent,” he says. “They have a pretty good support system with training in this area.”

Their fibre comes not just from the Cheslatta Community Forest, but also from Cheslatta’s private lands and other licenses.

Most of that fibre is sawlogs or pulp logs; some of it is biomass logs. The sawlogs go to Cheslatta Forest Products’ long-term customers, West Fraser and Nechako Lumber. Meanwhile, the pulp logs are shipped east to Canfor, and the biomass logs primarily go to Pinnacle Renewable Energy in Burns Lake.

Commitment to forestry
The rehabilitation project will help ensure that this fibre is available for generations to come, while also improving the health of the forest and the ecosystem.

Cheslatta Forest Products plans to begin replanting the area once the harvesting is completed and they have received trees from the nurseries, in 2022. Wilson says planting should be completed in the spring of 2023. Those stands will be harvestable in 60-80 years.

Overall, the project “shows there’s a commitment to sustainable forest management, so the community can see there’s going to be a future in forestry in the area,” Wilson says.

It also provides employment for members of the community – Cheslatta Forest Products employs 25 people, directly and indirectly – and fibre for Cheslatta’s partners.

“Really, the people of B.C. are the true benefactors of this project,” Pratt adds. “From a greenhouse gas benefit as well, getting fresh-growing trees out there will help with the carbon challenges the world faces. It will also help improve wildlife habitat by getting a future stand with tree cover and all of the other values that a well-established ecosystem will deliver.

“Also, we’re actually using some of the fibre that would normally be piled and burned. With our funding, we can allow something that in our industry would be considered uneconomical to go to a fibre user.”

Future fibre
Wilson and Pratt both agree that carrying out projects that use low-grade fibre like this one will be key for the future of the B.C. forest industry.

The future of the industry in B.C. will look considerably different given the fibre challenges the province is facing, Wilson adds.

As mountain pine beetle stands become less viable for harvesting, Wilson hopes that there will be more opportunities for low-grade lumber.

“It’s been great that places like Pinnacle have set up and Fraser Lake Sawmills has an energy system that takes low-grade fibre. I’m hoping that more of that will happen, because any stand that we go into now, there’s going to be a component of dead pine, and it would be nice to be able to utilize it,” he says.

He also sees an opportunity in commercial thinning as the industry begins to prioritize doing more with less fibre.

“We’re kind of the last jurisdiction in the world that doesn’t do it. So, if everybody else in the world does it, I don’t see why it wouldn’t work here,” he explains. “It’s more about training than anything – people aren’t used to those sorts of systems and there’s different equipment and kind of a different mentality that has to go along with it. That’s going to be the challenge more than anything.”

The industry needs to start optimizing all of the volume available, Pratt adds, while also keeping in mind the values that are important to the people of B.C. and the environment.

“I think we’re in a strong transition into a long-term sustainable forest sector,” he says. “It’ll look different than the previous 15-20 years, but I think with regards to the sector, it just needs to align itself with the future supply that’s available, and I think everyone’s really strongly committed to that.”

Related
Future-forward forestry: ARM builds capacity for long-term land management
Exploring EACOM’s Elk Lake sawmill
‘We had to rebuild the trust’: How the BC Saw Filers Association got back on track
A family affair: Dumas Canada takes on challenges facing the family business