Features Harvesting Transportation
The Costs of Being Green

Maybe Kermit the Frog had it right when he said “it’s not easy being green.” Certainly, log haulers would have to agree after several rounds of government-driven, emissions-related up-charges have jacked up the costs of new trucks while offering little in return in the way of improved reliability or performance.
The first of three rounds with Environmental Protection Agency (EPA)-related technological changes came in 2002, when all engine manufacturers but Caterpillar adopted exhaust gas recirculation (EGR) to reduce oxides of nitrogen (NOx). Caterpillar, for its part, came out with its own technology dubbed ACERT, and even though it spent several years and millions of dollars looking at EGR, the company decided to stay on its own path. 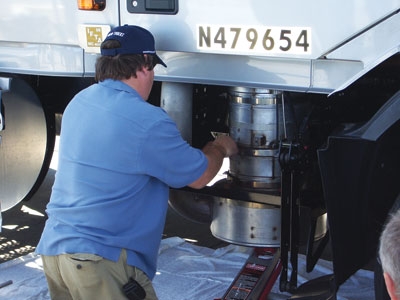 Maybe Kermit the Frog had it right when he said “it’s not easy being green.” Certainly

EGR, which involves taking hot exhaust in portions, cooling it and then routing it back into the cylinder, where it eliminates oxygen, cools combustion and reduces NOx formation, ultimately proved to be effective in meeting EPA NOx targets. It did, however, come at a cost. Not only did it add to the purchase price of new engines, but it also brought a harsh fuel economy penalty of up to 5%. Truckers, in the end, were stuck holding the double-edged sword of paying more for a product that cost them more to operate.

In 2007, a different form of pollutant caught the EPA’s attention. This time, the agency was targeting particulate matter (PM), which you can picture as the black soot expelled from the smokestack.

Beginning with model year 2007 engines, not only was EGR employed to reduce NOx, but a new contraption called a diesel particulate filter (DPF) was also required to kill PM. In simple terms, the DPF is a canister mounted onto the cab or frame rails that contains a catalyst composed of costly precious metals. Exhaust is routed through the catalyst, where PM is trapped and then burned off at high temperatures through a process known as “regeneration.”
Usually, when temperatures run high enough, PM can be burned off passively while the truck is in operation. In other instances, the DPF requires an active regeneration, which required a healthy dose of fuel to trigger the process. Again, compliance with emissions regulations was costing the truck operator on two fronts: with a higher up-front purchase price – to the tune of several thousand dollars – as well as increased fuel burn resulting from the DPF regeneration cycles.

All the while, Caterpillar continued on with its pursuit of ACERT technology, coupled with a DPF, but later decided to exit the on-highway engine market altogether.

By the time 2010 rolled around, along with the latest round of EPA-driven emissions targets, truckers had already endured two rounds of cost increases and had nothing but performance degradation to show for their investment. They’d also lost one of their preferred suppliers. Despite taking its own emissions strategy, Caterpillar enjoyed some of the strongest brand loyalty in the industry.

With 2010 looming, a showdown between competing technologies was once again in the cards. This time, however, it was Navistar International that chose to deviate from the herd and come out with its own solution.

In 2010, the EPA returned its attention to NOx, demanding engine manufacturers reduce their emissions of the pollutant a further 90% to 0.2 grams per brake hp/hr. International initially had an ally in Cummins, which said it would, like international, reduce NOx in-cylinder rather than relying on an exhaust aftertreatment system known as selective catalytic reduction (SCR), which was being employed by all other engine manufacturers.
Cummins, however, abruptly changed course in 2008, embracing SCR and leaving International as the only manufacturer prepared to go it alone without exhaust aftertreatment.

Dubbed diesel exhaust fluid (DEF), the liquid ingredient crucial to SCR systems is 32.5% urea, diluted with de-mineralized water. The safety of DEF’s key ingredient has been questioned, but all reports are that it is perfectly safe, in the same way that windshield washer fluid is safe. Just don’t go drinking gallons of it. SCR systems consist of a DEF tank, a catalyst, a DEF dosing system and the associated plumbing. Exhaust is routed through the SCR system, where small amounts of DEF are dosed into the exhaust stream. As the exhaust travels over the catalyst, it combines with the DEF to form a chemical reaction whereby NOx is broken down into harmless water and nitrogen.

While it’s once again a costly up-charge, to the tune of nearly $10,000, the good news is that, for the first time, customers can expect some performance improvement. Because the NOx is being eliminated downstream in the SCR aftertreatment system, engine manufacturers employing SCR can dial back EGR levels, creating as much NOx as they wish in-cylinder and then eliminating it all in the SCR system.

As engine manufacturers describe it, they can get back to letting an engine be an engine, programming it for optimum performance and then eliminating NOx downstream in the SCR catalyst.

Engine manufacturers using SCR are reporting, on average, fuel economy improvements of 5%, and customers who are early adopters seem to be bearing those claims out.

Navistar International, by forgoing SCR and severing ties with Cummins, has for a short time limited itself in terms of selling to the logging industry. That’s because its own 15-litre engine is just now rolling off assembly lines, so for several months no new International truck was available with anything other than a 13-litre International MaxxForce under the hood.

Now that its 15-litre MaxxForce is in production, truckers have a choice of two competing technologies. International’s solution involves ramping up EGR rates significantly and eliminating NOx in-cylinder, avoiding SCR altogether. The advantages of its approach are that truckers don’t have to worry about finding and storing DEF, which costs about $10/gallon and is distributed mostly via tote jug. Eventually, it will be more widely available, possibly even at truck stop fuel islands. 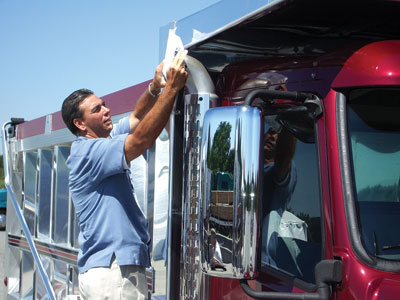 On the other hand, engine manufacturers using SCR boast improved fuel efficiency and are using a technology that’s been widely used throughout the world, including countries such as Sweden and Finland where loggers have been known to put trucks through their paces under some pretty harsh conditions. Detroit Diesel’s BlueTec SCR system, while new to North America in 2010, underwent 28 million miles of testing before it was launched. You’ll find Detroit Diesel engines powering many Western Star log trucks.

What it all comes down to is that complying with the world’s most stringent emissions requirements has been costly – very costly – for truckers. The cost of new trucks has gone up by well over $20,000 in less than a decade, and truck operators have had little to show for their investments.

As truckers come to terms with the latest round of EPA emissions requirements, the Obama Administration, through the EPA and the National Highway Traffic Safety Administration (NHTSA), has imposed fuel economy standards on heavy-duty trucks, beginning with the 2014 model year. This time, rather than targeting a specific pollutant, the goal is to improve the general fuel efficiency of heavy-duty commercial vehicles, including log trucks.

It is expected that the 2014 standards will be attainable using existing technologies, such as low rolling resistance tires, speed limiters and side fairings. But loggers will want to know why they’re being forced to invest in technologies that will do little to reduce their fuel consumption in the bush. Details of the new program are vague, as it’s still in the rulemaking process.

One thing is for certain: new government-driven, emissions-related changes are coming. And they’re not likely to put money back into log haulers’ pockets.