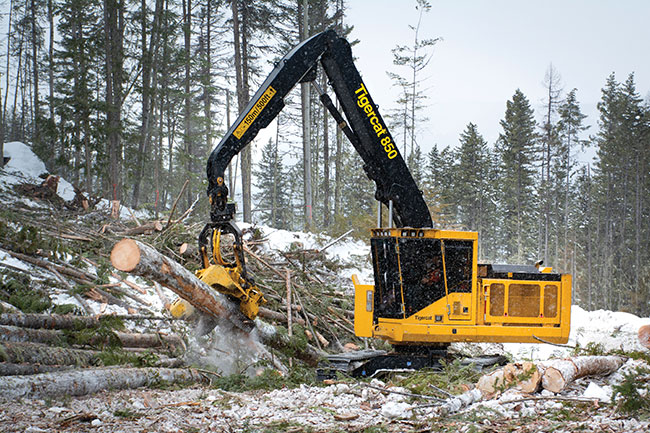 Both Carlson and LaMarsh comment on the improved right-hand side visibility due to the hooked boom profile of the Tigercat 850 with the new Tigercat 568 harvesting head. Photo courtesy Samantha Paul.

Sunshine Logging is based in Kaslo, a village in the West Kootenay region of British Columbia, Canada – located among picturesque snowcapped mountains on the western shore of Kootenay Lake.

Carlson started hand falling, line skidding and yarding after high school. In 1989 he started working for Sunshine Logging. Nine years later, he purchased half the business, and in 2018 he took full ownership. His wife, Vanessa, manages the books and keeps everything in order. Carlson’s oldest daughter, Kelsey, runs the company’s safety program and helps out in the office. His youngest daughter, Julia, operates equipment, currently working on the road-building side of the business.

Logging in the Kootenays
Sunshine Logging has a one-year renewable harvesting contract with Kalesnikoff Lumber Company based in Castlegar, B.C., and a contract with Porcupine Wood Products out of Salmo, B.C. Carlson also buys timber on private land.

“It is a bit of a mix,” he says. “That is what the Kootenays has going for it; we still have a log market here. We still have multiple mills. We don’t have one big licensee in the area running the whole show.”

Typical terrain in the Kootenay region is quite steep. The forests generally are mixed stands of fir, hemlock, cedar and spruce, known as ‘Kootenay Mix.’

The new iron
Sunshine Logging received B.C.’s third and fourth Tigercat 850 processors – both equipped with the new Tigercat 568 harvesting head. Carlson was tired of playing tug of war between the carrier and head with his processing equipment.

“Tigercat is a good product and I was attracted to the full package,” he explains.

The gear was purchased through Inland sales specialist Jason Quaife out of Cranbrook, B.C. With the new Inland dealership in Castlegar, Sunshine Logging will now be serviced by this location.

“Castlegar is ramping up. They have hired some new mechanics – it’ll be good for us having a closer branch,” Carlson says.

Carlson ordered the 850/568 packages in April 2019 and toured the Tigercat plant in Ontario the following month.

“I was impressed. It’s amazing what they’re doing there. It’s a factory with a customer touch,” he says. “A lot of the factories I’ve been to, they’re mass-producing excavators. You’re just getting what everybody is getting. You walk into Tigercat and you can see your machine. There’s a good chance I was climbing through the frame of our 850 when it was still steel. As for the head, I think we determined we were watching ours being built when we were there.

“I’m fully aware that we are in a bit of a prototype phase when you get the first of anything, but I wasn’t worried,” he continues. “If any problems do come up, Tigercat has always been good about bringing that improvement back to us. And it’s not my first early Tigercat. I bought a brand new 870C buncher in 2005 and we had two early L870s before that.”

First impressions
Sunshine Logging’s first 850 processor with the Tigercat 568 harvesting head arrived onsite in January 2020. Carlson wanted a head that could work efficiently in both eight-inch pine and 30-inch fir.

“It is a big factor,” he says. “We were worried the head was going to be a bit small since we do push 30-inch wood. The whole thing is getting the right size head to be efficient in both.

“The swing on it is really good. I definitely notice a difference from the previous excavator-style carrier. The twin swing drive is a lot better,” he adds. “The saw is a lot faster cutting than on excavator conversions, which is saving time, and it’s actually producing a better product. We’re getting less ladder check.”

If the saw cuts too slow and there’s tension in the log when it cuts, it tries to break it, and it will leave splits. Because the saw is cutting faster, it is more of a clean cut. This is especially important as the wood gets bigger.

Carlson also commented on how the right-hand side visibility has improved due to the hooked main boom profile. “It was always a blocked view with the straight style boom,” he says.

LaMarsh was inpressed by the processing performance.

“It doesn’t matter if the logs are eight inches or 30 inches, it just pulls them through effortlessly,” he says. “It’s set up nice. The way the head hangs makes it easy for picking. The length and diameter reading are really good. The length of the logs has not varied two inches from what the reading is telling you.

“The heated seat is awesome and the visibility with the bent boom is way better. Overall, it’s much better than a regular excavator. That is for sure.”

Kerry Gouldsborough
The second 850/568 processor package arrived the first week of February and is operated by Kerry Gouldsborough. At the time of this writing, Sunshine Logging’s machine had accumulated 120 hours.

This is Gouldsborough’s first Tigercat. “It’s fast,” he claims. “I really like it. It’s way quicker than I expected. I find the operating station really comfortable. It’s a small cab but when you’re sitting in there, it’s actually quite comfortable.

“I’m surprised at how big of a piece I can run through that head. I’ve run logs up to 30 inches through it,” he continues. “I haven’t had to work on the carrier yet, but I like how everything is contained. Everything is airy and it opens up well. There is good access into the centre of the machine and all the way around it.”

And, “because it’s purpose-built, your functions are a lot better,” he says.

On his previous processor, if the head was having an issue, it basically eliminated the rest of the hydraulic system.

“You had to wait for the head to finish before you could do anything. It didn’t multi-function as well as the new package. With this, you don’t have that issue,” he explains. “Other guys that have run the Tigercat brand all say they’re great. So, I was actually quite excited to be getting it, especially brand-new, straight out of the box.”

Increased productivity
Carlson, LaMarsh and Goldsborough have all noticed an increase in productivity since getting the new machines.

“We’re early on, but I think for sure we will see an increase. We just haven’t got past all the visitors,” Carlson says, laughing. At the time, the crew hadn’t been able to run at full capacity for several weeks because of all the interested people coming out to see the machines in action.

Carlson wanted the full Tigercat package and is very happy with his decision. “At the end of the day, the two work better together since they’ve been designed and tested together.”

Samantha Paul is a marketing specialist with Tigercat Industries Inc.