Industry News News
The show must go on

Numbers were expectedly down this year for the annual Truck Loggers Association (TLA) convention in Vancouver as loggers on BC’s coast continue to struggle through one of the toughest times in the industry’s history. This year’s event, which was held at the Bayshore hotel in mid January, attracted approximately 1,700 participants. That was about a 15% reduction from last year’s crowd. Also missing from the event was the large display of heavy equipment that usually dresses up the convention’s entrance area. 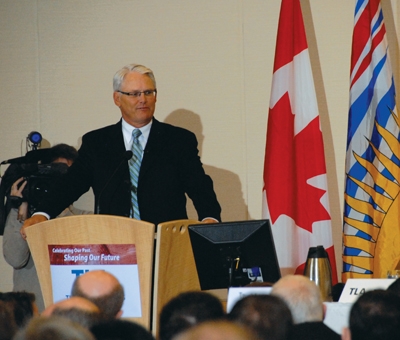 BC Premier Gordon Campbell told the audience at this year’s TLA convention he was reducing stumpage on the BC Coast to $5 per cubic metre Numbers were expectedly down this year for the annual Truck Loggers Association (TLA) convention in Vancouver as loggers on BC’s coast continue to struggle through one of the toughest times in the industry’s history.

Inside, everyone tried to make it business as usual for the TLA members, who are mainly independent loggers from Vancouver Island and the BC coastal region. However, the mood was somewhat somber as many members were grasping for lifelines to help them stay afloat during the current global economic downturn. Those lifelines were few and far between as most of the speakers told the crowd what they already know – financing will be tough to secure, demand for logs will continue to be down, and we haven’t seen the bottom yet.

One positive note was the announcement by BC Premier Gordon Campbell that the stumpage rate on coastal logs would drop by 50% to just $5.00 per cubic metre. However, with almost two thirds of coastal loggers not working right now, the Premier’s announcement didn’t draw the kind of enthusiasm expected. Any celebrations it did create were short lived as not long after the announcement, Steve Swanson, chairman of the US lobby group, Coalition for Fair Lumber Imports, called the reduced stumpage an “egregious” violation of the 2006 Softwood Lumber Agreement (SLA). “My view is it is a clear violation, possibly the most egregious violation to date.”

Zoltan van Heyningen, executive director of the coalition echoed Swanson’s remarks, noting their initial reaction is that the reduction in stumpage is a violation of the SLA.

BC Forest Minister Pat Bell said the reduction is justified. “These are all market-based changes. There’s nothing here that should raise any flags with the US softwood lumber coalition or in fact with the Softwood Lumber Agreement. Everything has been done very cautiously and carefully as we moved through this process.”

No Easy US Access
Swanson and van Heyningen were at the TLA convention to participate in a panel discussion called “Global Reality”. Convention organizers had hoped an invitation to the pair may provide an opportunity to open discussions on a regional free trade zone where the export of BC logs to the US would facilitate free trade for BC lumber. As most of the TLA members are logging contractors and not tied to a sawmill or log processing plant, the association would be interested in examining opportunities to sell more logs outside of BC. However, any optimism for expanded log markets disappeared fairly quickly as the Americans made it clear they are looking for an all or nothing deal, saying only a Canada-wide solution would be acceptable.

“The log export restraint system is the cornerstone of the subsidy system in Canada,” said van Heyningen. “We view it as a US-Canada issue and it needs to be solved wholesale between Canada and the United States.”

Swanson also presented a hard line approach. “As you know, the Canadian provincial governments severely restrict the export of softwood logs, especially logs of high enough quality to be milled into lumber,” he said. “Log restrictions keep more fibre in Canada, which subsidizes Canadian sawmills. This provides Canadian mills with significant advantages, allowing them to better maintain production and employment. In order to have total free access in lumber, we would have to have total and free access to logs. It can’t be a half measure on Canada’s part.”

The comments were met with minimal resistance from the other panelists or  audience members. “Frankly, I think this has come up before and the major lumber producers down south have said ‘we won’t benefit from BC logs, but our competitors will’ so they have been against it,” says Lewis.  “I am not naive enough to think that even if we did get free trade in logs, we wouldn’t get rid of the SLA until they address the issue of their coalition counterparts from the south.  But I really have to give them full marks for coming here to what they expected to be a hostile environment and presenting their opinion. I noticed that during the Premier’s speech, Steve Swanson applauded the Wood First commitment by the Premier.  That shows that we do have some common ground from which to build on.  This started a discussion and hopefully that will continue and we will find more things that we can mutually agree on.”

Other panel discussions at the event were not as controversial and included titles such as “Lessons From the Past”, “Dealing with Reality”, and “The Progress Panel”. A breakfast discussion was held with BC Forests Minister Pat Bell, and Premier Gordon Campbell showed support to the industry as the keynote speaker in an $80 a plate lunch. Evening events included a Welcome Reception and Casino Night, a Suppliers’ Night, and the President’s Banquet and Ball on the closing evening.

The trade show floor at the convention was a quiet affair with participants saying it was smaller than in the past and with far less activity. Most of the major logging equipment and truck manufacturing companies had a presence, but many reported interest was not at the same level it has been at other conventions.

Next year’s TLA convention is slated for Vancouver Island.


Related
Tightening Timber Supplies and Rising Prices
It’s Not Over ’til It’s Over
Is the ‘Super Cycle’ Coming?
Conference Season