The H855C tracked harvester from Tigercat is not meant to please everyone. Instead, it’s built from the tracks up to do one thing, and do it well – Harvest or process trees in less-than-ideal conditions. Stumpside or roadside, all day and all night long, year after year, as efficiently as possible. Its role is obvious the first time you set eyes on the H855C, with its long harvester boom and mated Tigercat TH575 harvester head on the business end. To get a little more background on this new machine, CFI stopped by the Tigercat booth at the Atlantic Heavy Equipment Show to talk with advanced engineering manager Grant Somerville, and harvesting head product manager Duane Barlow. It’s not our first time talking with Grant about new Tigercat tracked products – We toured the forests of northwestern Ontario way back in 1994 with Grant when Tigercat introduced its very first tracked feller buncher to Canada. He’s lost none of his enthusiasm for product development. 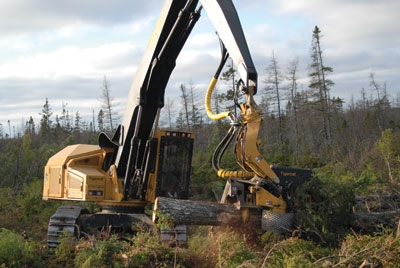 The H855C tracked harvester from Tigercat is not meant to please everyone. Instead 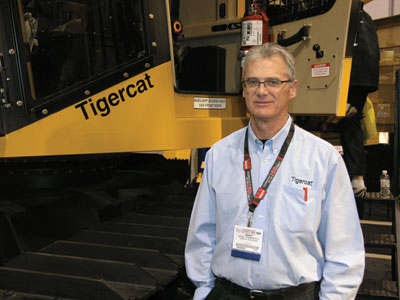 “We’ve built this machine for a particular market niche, although it’s a pretty big one in Canada. It’s meant to fit the needs of contractors who find excavator conversions don’t quite fit their needs for stumpside or roadside processing/harvesting. They like the fuel efficiencies possible with some of the high-end excavators versus say a full-scale feller buncher-based harvester, but find they still need more of the purpose-built features for the terrain or to get the job done. Either those features aren’t available with a conversion kit, or they’d be so expensive to get them it’s not cost efficient any more. That’s exactly where the H855C comes in.”

He’s right on about the size of this niche in Canada, as loggers look for every way to bring down the cost of wood per metre. There’s also no doubt that this machine is built to harvest and process. First off, in the case of the machine we saw at the Moncton show, it’s a 100% Tigercat solution from tip to tail. Much like the purpose-built rubber-tire packages from Scandinavia, the H855C and TH575 head are designed to work together for maximum efficiency. When asked for a few owner/operator benefits a logger can expect from this approach, Grant quickly rolls off a dozen or so, starting with the boom, which is the manufacturer’s well-respected ER boom (a 12-m, or 39-ft, squirt boom is also available).

“It’s a purpose-built boom – not a digging boom – that’s the first thing. It’s a planer motion design, so it shoots out straight to the tree, like Scandinavian purpose-built rubber tire harvesters. That gives you control, speed, and precision that are in another league compared to excavator booms.”

It also gives efficiency, as the boom can be a major culprit when it comes to fuel consumption. It’s thus no surprise that an efficient boom built to harvest will save a fair bit of fuel. In fact, coupled with a 275-hp Mercedes engine, variable-pitch fan, new controls, and super-sized cooling package built for the 300-hp 860C buncher  (extra heat equals wasted energy), the H855C uses only as much fuel as necessary to get the job done, as Tigercat sales manager Ron Montgomery explains.

“We’ve had loggers report fuel consumption of 18 litres/hr, but a safer range for planning purposes might be 20 litres/hr. These are respectable numbers for a tracked carrier with this kind of power and flow.”

In fact that flow was designed precisely to drive a modern harvesting head, like the TH575 in particular, but also a Waratah 624C size head. While a harvesting head’s average hydraulic power demands are quite a bit less than a buncher with hot saw, averages don’t mean much in the real world. A harvesting head’s peak flow can be significantly higher than that of a hot saw, so the flow must be available when needed. A well-matched excavator may run a harvesting head, but may not provide the juice for maximum performance. The H855C uses a dedicated attachment pump and hydraulic system design that lets harvesting heads work to 100% of their performance potential. For many loggers, this is the balance between power, fuel consumption, and production they’re looking for. 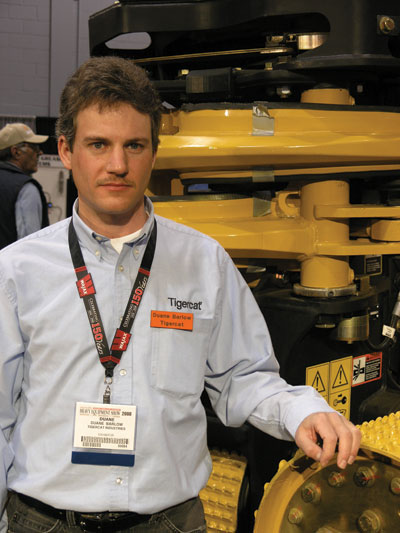 Duane Barlow is responsible for the new TH575 head, so he’s understandably biased about its perfect match with the H855C. The two machines were designed together in the same facility in southern Ontario, with the carrier and head design teams working together to create that seamless flow that until now was a near monopoly of the rubber tire machine.

“It’s a perfect match to the swing and power of the carrier,” he explains while taking me through the head’s main design features. “It also has some nice features itself, like a variable 2WD and 3WD system, where it switches between the two automatically depending on the combination of torque and speed required (rather than using variable displacement motors). It has independent feed roll arms and the option of an independent knife for crooked wood. It can easily handle stems to 22 inches, but is also designed to handle down to a two-inch top. It’s obviously our preferred package, but the H855Cs that have gone out to date have a mix of Tigercat and other heads, and they all have worked out well.”

Back in the spring, Tigercat had a number of the H855Cs working, with several in NS, QC and BC each, as well as units in Ontario, the US and in export markets. The oldest had over 4,500 hours in April, with others over 2,500 hours, but the machine had been tested for a year prior to that, and has many proven components from the buncher program. Still, it’s not for everyone Grant admits.

“If a logger can use a small excavator almost off the lot at roadside or a mill yard, and feels he’s getting 100% of what his application requires, we can’t touch that.”

But for those who need a little more, have rougher ground, work at the stump, or need more power or performance to handle their log diet, Grant feels they have a simple recipe for attracting the interest of today’s tight-margin logging professional.
“The idea is to go head to head with smaller excavators in terms of fuel consumption and long-term operating costs, but with 25% more production. That’s the kind of equation loggers will be interested in today.”

Whether that production comes from having the power to simply roll a tree out of a pile during processing rather than wrestling with it using the boom, less downtime, faster processing in bigger, limby wood, or quicker, more precise boom movements, it may well be a recipe for success.