A snapshot of the North American softwood lumber market. 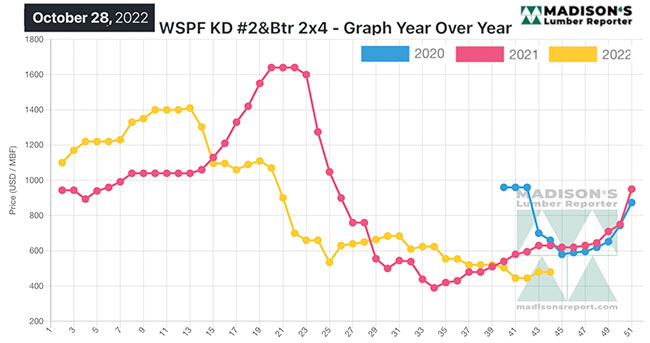 As the forest products industry matures into this post-COVID-19 landscape, and the new realities of macroeconomic conditions become more clear, a better picture of cyclical lumber price trends is forming. In the past, solid wood manufacturers were able to rely on a relatively stable seasonal cycle; the beginning of slowdown after Labour Day, with lumber prices dropping until the end of the year. Then more buying in advance of the spring construction season, which brought higher prices usually by February.

For the past couple of years that historical annual cycle did not come into play. Even realtors noted that the traditional quiet time of less business did not come about. Historically, most people did not want to move over the holidays, or in January, but since spring 2020, that changed.

Now there appears to be a return of seasonal stability in home buying, in new housing construction, and thus for lumber demand as well. However, there are quite a few changes in comparison to the past. The most important for sawmills is that a new floor for dimension lumber prices has been established. If the dramatic price increases seen since early 2020 had happened incrementally over the previous decade, for example up 10 or 15 per cent per year, no one would have thought it unusual. Those price rises were so sharp and happened so suddenly, some people thought that levels must come back down.

The other main reason there is a new bottom for lumber prices is because the cost structure for producers has changed completely. Not just general inflation, but more fundamental – structural – changes to the forest industry and sawmilling which have increased operating costs significantly.

As understanding of these new realities emerged, the forest products industry is looking forward to next year and wondering what to expect. Opinions range widely about forecasts for price points, but there is general agreement about one thing; the wild volatility of the past two years is behind us. So where are future price swings likely to land?

It seems that Western Spruce-Pine-Fir 2×4 #2&Btr KD (RL) will fluctuate somewhere between US$500 and $700 mfbm. This is because that lower price is very generally the new cost-of-production for most large-volume operators in B.C. It is also because industry has become much more savvy since the early-2000s, in terms of responding quickly to market conditions by curtailing production and taking downtime.

So the habit in the past of continuing to run lumber despite big drops in demand, thus keeping supply high and driving prices down, is no longer the usual method of operating. Since the beginning of 2021, facilities across North America have noted dropping demand and have responded by reducing production volumes.

The importance of U.S. housing starts, especially single-family starts, to sawmills cannot be overstated: fully 65 per cent of Canadian softwood lumber sales go to the U.S., largely for new home building, 10 per cent is sold within Canada, and six per cent goes to Japan. Japan lumber purchases are entirely #1/Appearance Grade, or Premium wood, not the standard grade, or #2&Btr, used in North America.

September starts of single-family housing in the U.S., the largest share of the market and construction method which uses the most wood, reversed an increase in August, to fall 4.7 per cent to a rate of 892,000 units. Single-family authorizations were at 872,000 units, which is 3.1 per cent below the August figure of 900,000 units. Building permits are generally submitted two months before the home building is begun, so this data is as indicator of November construction activity.

Over the past few years, a close correlation has emerged between those benchmark dimension lumber 2×4 prices and U.S. housing starts (both total and single-family).

As this year wanes and 2023 looms ever closer in the horizon, here are some important points to keep in mind, for what can be expected in the coming year:

Regarding the lumber market and current prices, into the latter weeks of October mild weather in many of the densely-populated areas of the U.S. provided the opportunity for an increase in construction activity. As such, demand for dimension lumber and other solid wood building materials brought a bump upward in lumber prices, due to limited supply in the field. Sawmills and wholesalers both had been keeping inventories low in expectation of true winter and the end of most housing construction until spring.

An ongoing work-stoppage at Weyerhaueser’s facilities in the U.S. northwest impacted supply of West Coast species. As a result, those prices jumped by a larger degree than other lumber commodities.

Then as October drew to a close, sawmills in the Pacific Northwest had established order files into the first or second week of November. This is quite strong for the time of year, when lumber demand is traditionally dropping off. Significant production curtailments at several large B.C. lumber producers helped keep supply and demand in balance, also keeping softwood lumber prices flat. Most of these operators cited high log costs versus lower lumber prices as the reason for taking this downtime.

Meanwhile, it seemed that Weyerhaueser and the union came to an agreement, so the recent lack of Hemlock and Douglas fir lumber items should be rectified. These supply constraints, combined with quite low inventories in the field, provided lumber sellers with the ability to eschew counteroffers and stick with their prescribed price lists – for another week, at least. 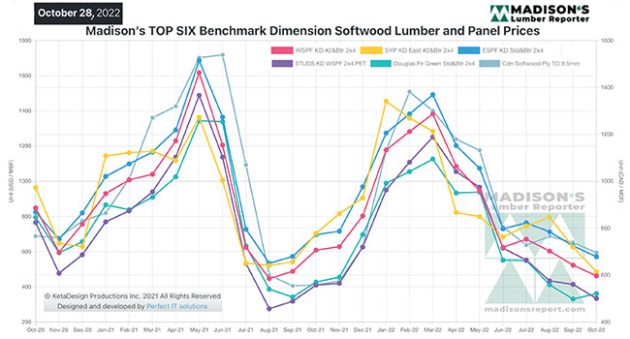 Above all else, the most important thing to keep in mind is that the single largest cohort of first-time home buyer right now are millennials. And there are more millennials than baby boomers, so expectations are for 15 years of robust demand for housing simply due to demographics. Not to mention that U.S. housing was underbuilt compared to population for 10 years following the housing crash of 2006.

As well, the existing housing stock is beginning to age out, with a large number of those home at or approaching end-of-life.

So whether for the sustained increase in home-buying demand of those entering their early 30s over the next 15 years, remodelling or reconstruction of aging existing homes, or rebuilding after extreme weather events, the need for solid wood building materials will be unabated in the coming years.