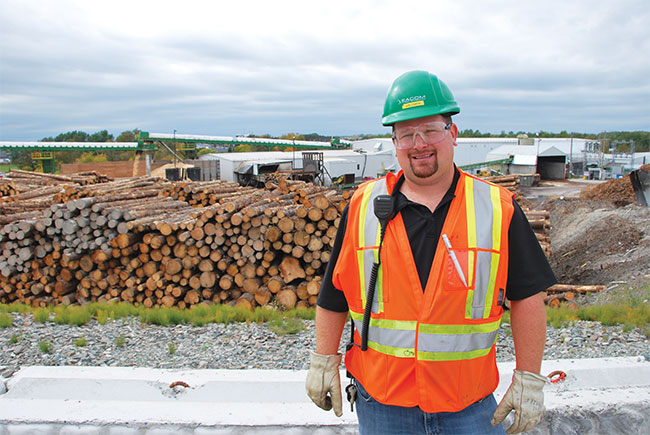 One hundred years ago, Rudolph-McChesney Lumber built a modest sawmill on the banks of the Mattagami River in the newly established town of Timmins, Ont. The mill supplied timber to the nearby gold mines and growing community of miners.

A century later and the sawmill – now owned by EACOM Timber and producing nearly 150 mmbf dimension lumber annually – remains an important employer in the northern Ontario town, as well as a model for sustainable forestry and local investment in the forest industry.

“Lots of generations of employees are working here, father and son, grandfathers, and so on,” says Joel Cantin, interim mill manager at the Timmins sawmill. Cantin started at the mill 13 years ago as a millwright and worked his way up to general superintendent before he was tapped to take on the interim mill manager position earlier this year.

A good number of the mill’s 115 direct employees have worked there for more than 25 years. Another 215 or so contractors and suppliers also rely on the mill for steady employment. 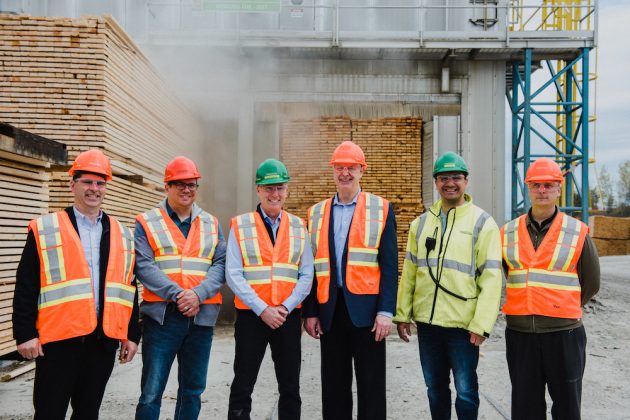 EACOM Timber Corporation’s Timmins sawmill turned 100 in June and the company marked its centennial with a day of community celebrations and mill tours.

A few months after the celebrations, CFI visited the sawmill to see what’s behind the mill’s longevity in a commodity-based industry with extreme market swings. Not surprisingly, it comes down to multiple factors including a strong community base, sustainable forest management practices, and leadership that is willing to invest in technology and people.

After more than 10 years of direct EACOM investment in optimization at the mill, Cantin says the facility’s recovery has improved steadily to more than 300 board feet per cubic metre – between eight and 12 per cent.

Four decks feed logs onto the main infeed belt. The breakdown line is a complete USNR package installed in 2013, nearly two years after a fire destroyed much of the mill’s equipment. The line begins with a scanner and log rotation system, followed by the log optimizer, which determines the cutting pattern solution. The log optimizer has two scanners, each scanning half the log due to the short length of the conveyor. Logs then run through the side canter heads, a fixed top head, VFM and quad saws for sideboards. The cant is then scanned again for curvature before the vertical shape sawing gang edger.

Newnes completes the line with a board edger, trimmer and stacker before the PHL sorter.

In 2017, the mill undertook a large capital project to install eastern Canada’s first continuous dry kiln (CDK). The new multi-million-dollar kiln from Wellons was specially designed to fit the Timmins sawmill’s small footprint, which is one of the smallest within EACOM’s group of mills. 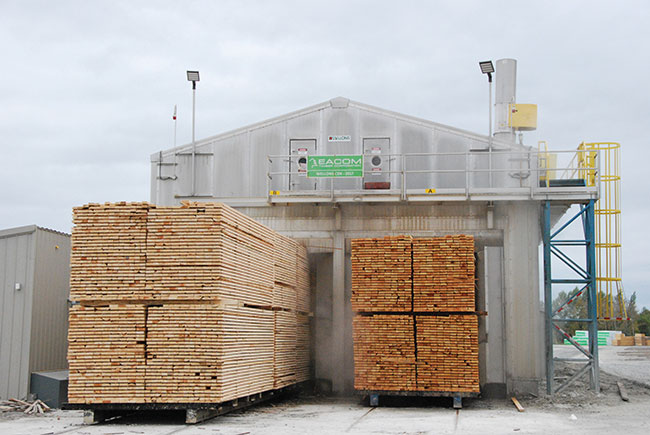 In 2017, the mill installed a Wellons continuous dry kiln, the first mill in Eastern Canada to invest in continuous kiln drying.

“The cost savings for energy is significant,” Cantin says. “The standard deviation is a bit better. It’s a shorter CDK than others, but there is still a lot that we can test.” EACOM is working with FPInnovations to trial various combinations of species to optimize drying times.

A UV code printed onto each board is then picked up at the grading station where coloured lights identify the grade: red for premium, yellow for number one and two, green for number three and blue for economy. Staff members at the grading station verify if the system is calibrated and manually downgrade any boards that were broken in transit or need additional drying. 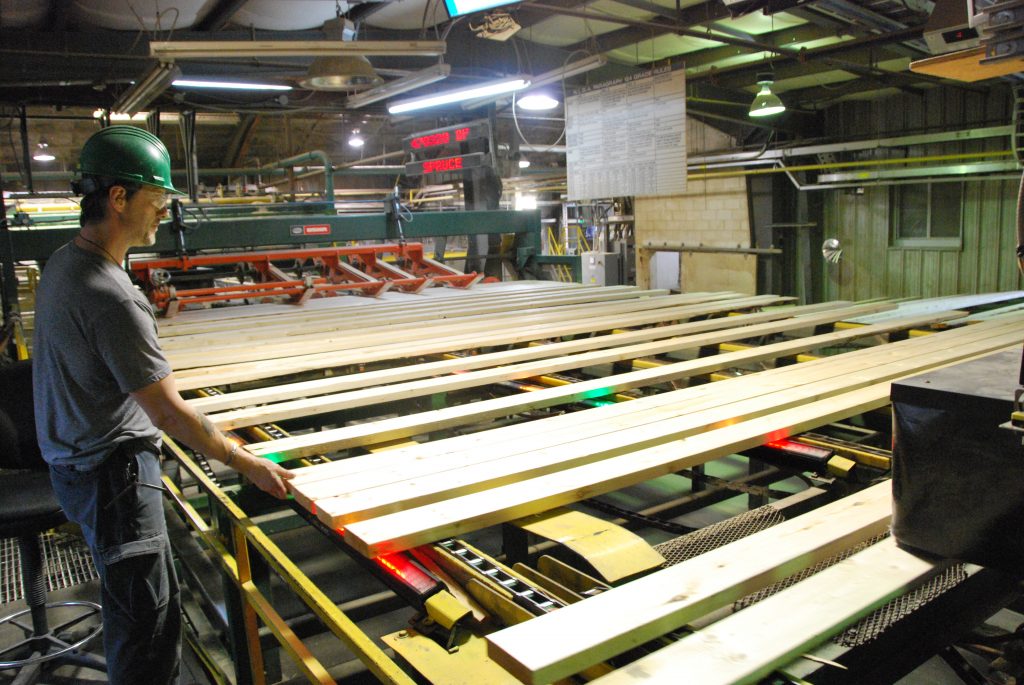 The Autolog ProGrader linear planer optimizer prints a UV code onto each board that is then picked up at the grading station where coloured lights identify the grade.

The trim line is projected on the lumber as it heads through the Newnes trimmer before the PHL sorter and Signode strapping system.

The mill produces 2×4, 2×6, and 2×10 in eight-foot and 16-foot lengths. Byproducts are sent to pulp and paper mills and co-generation power plants.

Upcoming projects include a revamp of the planer mill’s tilt hoist, which is being done in-house to allow staff the chance to design it to best fit their needs.

“We’re one of the biggest technology competitors in Eastern Canada. If it’s there, it’s new and recent,” Cantin says. “We’re always looking to invest in our people or in our equipment to modernize everything. We always have to upgrade – if you don’t you won’t be competitive, so that’s something we strive to be.” 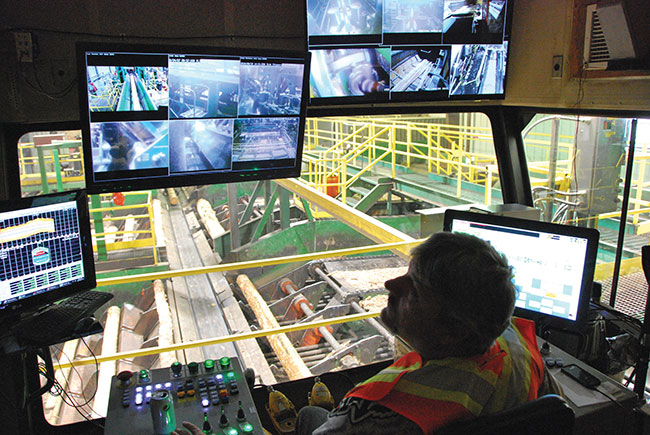 EACOM’s 10 years of direct investment in optimization at the mill has improved its recovery between eight and 12 per cent.

Blair Sullivan, EACOM’s general manager of Ontario forest operations, manages the timberlands feeding the Timmins sawmill as well as its sister operation, Gogama stud mill, in Ostrom, Ont. Gogama receives the pine, spruce and balsam stems 3.5 to 5.5 inches while everything else heads to Timmins.

Sullivan operates on EACOM’s two sustainable forest licenses (SFLs) in Northern Ontario: the 1.2 million-hectare Spanish Forest and the 390,000-hectare Pineland Forest. Those SFLs bring in about 1.15 million cubic metres a year. EACOM is one of a handful of partners on another five SFLs in the region that feed their other mills. Some supplemental volume is purchased from private land in the area.

Unlike their B.C. counterparts, Eastern Canadian mills have a somewhat stable fibre supply. However, the skilled labour shortage, particularly the lack of log truck drivers, is a mounting concern that is beginning to impact volumes, Sullivan says.

“We need drivers. And a truck driver has not been looked at as an illustrious career over time,” he says. “Drivers are often pulling in more than $85,000 a year, but it’s hard work and you have to be skilled. It’s not just anybody that can drive down a forest access road with ice and blinding snow and do it. They’re skilled workers and we need to raise that profile that they are special.”

Sullivan has a few irons in the fire to recruit new truck drivers, whether it be through new partnerships with companies in other industries or training schools. But the need is becoming dire. “I need 15 trucks today. And we’re all in the same boat,” he says.

More than a few Timmins sawmill employees have been working at the mill for 25 years, with some closing in on half a century. These experienced staff members are invaluable to the company, but the countdown is on for their retirement, EACOM president and CEO Kevin Edgson says.

“There are people who have been working 35, 40 and 45 years for this company or some iteration of it. There is so much history with those people, so much experience, and yet it’s going to be leaving the industry,” he says. 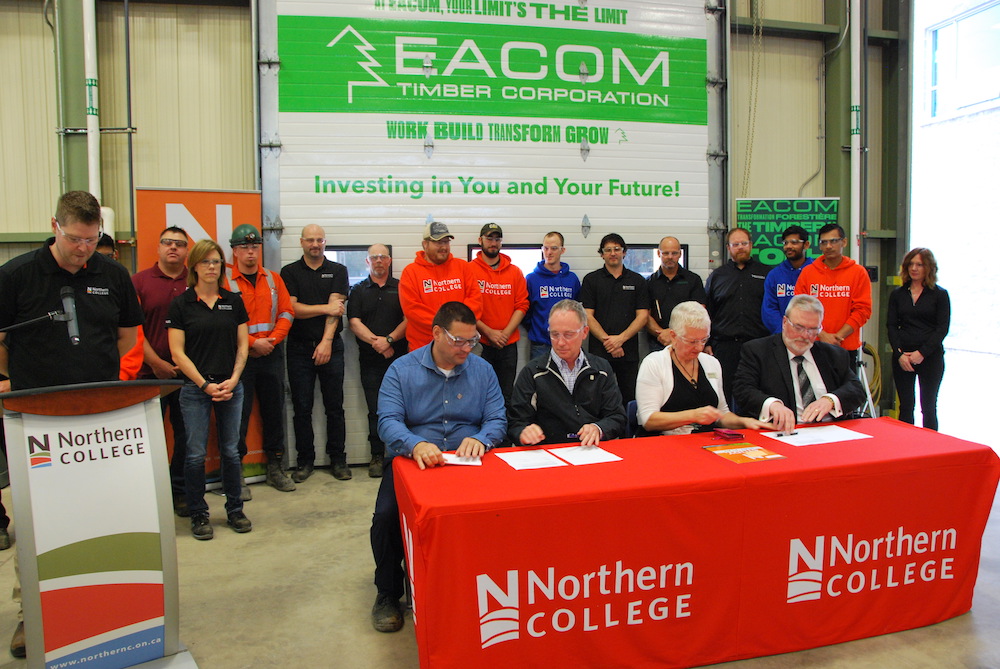 The timing of the agreement is pivotal, Edgson said.

“This is so important because we will be able to engage the young people, get them into the pipeline, into the process, while they still have the chance to learn from those who have been there before, who have seen pretty much everything. So we get that vitality and that enthusiasm, that passion coming in, and you have the wisdom and experience passing down. It’s a fantastic opportunity,” he says.

For its current staff, EACOM has a leadership program in place to provide a development opportunity for would-be or current managers. Cantin began the 18-month program this year and says it’s a good way to exchange ideas and best practices among EACOM’s various operations and departments.

“Every time we get together it’s different: we have communication modules, HR modules; sawmilling is coming up, as well as continuous improvement. You connect with people and it gives everyone a better perspective about what the other jobs involve,” Cantin says.

Looking to the future, Julie Paquet, communications director for EACOM, says the company is reacting to the lumber market dip by balancing costs while focusing on their competitiveness. For Timmins in particular, staff are committed to keeping the century-old mill running for the next 100 years.

“We’re more and more present in the community, whether it’s with the colleges or the schools; it’s about connecting with the people. We’re right in the middle of town. The next side of the river is the community park. There’s a forest heritage and pride here and I think it’s really nice that we can carry that forward,” Paquet says.

Archive images of the Timmins Sawmill