In case CONEXPO 2005 wasn’t big enough (it was), the 2008 edition held March 11-15 in Las Vegas, NV, was 21% larger and saw a significant boost in attendance to boot. Total exhibit space was over 2.4 million ft2, allowing almost 2,200 exhibitors to show their wares, alongside another 469 in the adjacent fluid power/hydraulics show (IFPE 2008). 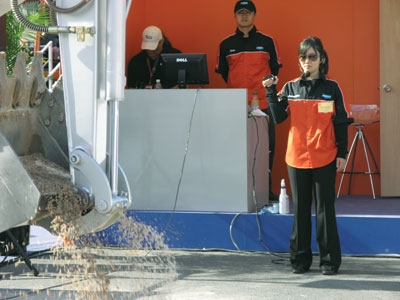 In response, close to 145,000 industry members showed up to get a glimpse of the latest and greatest in heavy equipment and associated technology, and to wear out a good pair of shoes in the process. Here is just a tiny fraction of what they saw.

Hands-on control
Doosan Infracore had a crowd-pleaser on its hands with its new i-Hand motion interpretation technology. Looking more video game than heavy iron, the device straps onto your hand and forearm, allowing even the greenest of operators to run heavy machinery from a remote location. More importantly, they can do so with very limited training. In the interest of space, Doosan’s young remote operators were running a mini-excavator, but the prototype technology can be used on any size machine. The company was also unveiling its new finance wing, and its brand new DX225 and DX255 excavator series. The 148- and 166-hp machines boast a new electronics communication package between engine and hydraulics for better fuel economy, easier maintenance access, and a boom overload alarm.  www.dhiac.com.

Chetra makes Russian dozers, not coffee makers
According to export director Vladimir Lukonin, Chetra Industrial Machinery sees Canada as one of the world’s largest markets for its line of forestry equipment. The supplier is one of Russia’s largest heavy machinery makers, and is perhaps best known for its rugged line of bulldozers. It also makes several models of rugged, but very simple skidding machines, and recently purchased the Silvatec line of cut-to-length logging gear. It hosted a press conference at CONEXPO to announce that it is looking for dealers in Canada to handle both its original full-tree line and the newer Silvatec CTL equipment, which is still made in Denmark. While Silvatec harvesters and forwarders come with all the bells and whistles you’d expect from a modern logging machine, Chetra dozers and skidders represent a more down-to-earth approach that many cash-strapped Canadian loggers may appreciate. As Lukonin summed up for the North American trade press, “Our dozers don’t brew coffee or fly – They just move earth efficiently.”  www.chetra.ru. 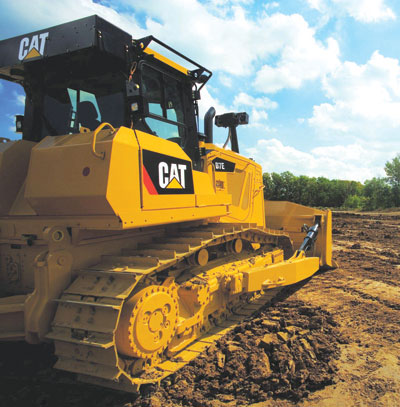 The all-new Cat D7E dozer with electric drive will bring many benefits to users once it is at your local Cat dealership in 2009. This “first-of-its-kind” electric drive dozer was unveiled at CONEXPO in Las Vegas this past March, and is designed to consume fewer resources and fuel over its lifespan. The oval track machine is slated to move 25% more material per litre of diesel, or use 20% less fuel per hour. It also boasts 60% fewer moving parts in the electric drive train, and overall Cat says it will reduce owner/operator undercarriage costs by between 35 and 70%. Cat expects  forestry applications will make good use of this general
technology as it is moved to other products. www.cat.com.

Tier 4 with fuel savings
Owners of trucks and heavy equipment still remember the hit they took in higher purchase prices and fuel consumption from the move to Tier 3 engines. Few look forward to the move to Tier 4. Perhaps there may be pleasant surprises, such as Cummins Inc.’s new heavy-duty 16-litre QSX. This diesel will use an array of new technology from its fully integrated air intake and XPI high-pressure common rail fuel system, to its exhaust after-treatment to meet Tier 4 regs that come into play January 2011. It will do this, the engine supplier says, while boosting power output to 650 hp from 600, and peak torque by 12%. Best of all, Cummins claims a 5% improvement in fuel economy. Cummins told industry journalists at CONEXPO that it expects to have 50,000 plus field test hours on this new design before its 2011 launch.  www.cummins.com. 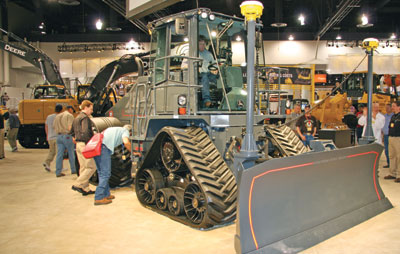 John Deere says its innovative 764 High-Speed Dozer (HSD) has the potential to “revolutionize site prep and roadbuilding work with its speed alone.”  Unveiled at CONEXPO 2008, the rubber-tracked 764 HSD combines the speed of a grader with the flotation of a crawler dozer.   www.deere.com