The major forest equipment suppliers were all on hand, new logging equipment working, at DEMO 2008 in a show to the industry that they are here for the long haul, through good and bad. Live logging events like DEMO 2008 are costly ventures for all exhibitors, especially those that bring lots of gear to work. Yet, in an impressive display of industry support, bring it they did. As Ponsse North American president Marko Mattila told attendees during his site demo, “We know the market is tough right now, but we also know it will recover. We’re in it for the long haul – That’s our philosophy.” This sentiment was echoed many times over by suppliers around the 3 km live-logging loop.

The major forest equipment suppliers were all on hand

This commitment was rewarded by a very decent showing given the state-of-the-industry, and the scale of operations in Atlantic Canada. Mark Cusack, show manager for the past two DEMO International shows, pegs attendance at 6,200, a number that unlike most show figures excludes exhibitors, multiple day visits, and children. These were all the real deal.

For our part, CFI Magazine enjoyed excellent traffic through the show, and met everyone we hoped to and more. It always helps when you have something new to talk about – In our case that was Canadian Biomass Magazine, and the interest level was astounding. Nor were we alone in expounding all things biomass – Just about every live site, and many static ones, had a biomass component, and I’ve never seen so much slash, hog, and mulch at roadside in one trade show. The majority of this new gear, along with a report on the pre-DEMO bioenergy conference, will be featured in our next issue of Canadian Biomass – December 2008. For the rest of it – the logging gear – we share what we saw over the next few pages. No doubt we missed plenty, so feel free to draw any omissions to my attention, and I will gladly add them to a coming issue.

Finally, hats off and a wide, sweeping bow to the organizers and hosts for DEMO 2008. Ledwidge Lumber, Master Promotions, and the CWF put together a great event. The next DEMO International is slated for 2012, and while no decision has been made by the Canadian Woodlands Forum, it will most likely be in Quebec.  – Scott Jamieson 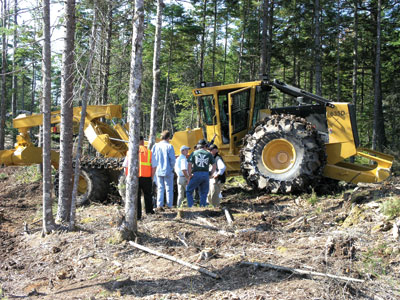 O kay, so that’s a little simplistic, but Canadian manufacturer Tigercat Industries is out front when it comes to developing 6WD skidders, and there are many applications where six is in fact more than 50% better than four. Tigercat produced the first 635 6WD skidder in 2000, a machine that worked in applications where better weight distribution, reduced ground pressure, higher load capacity, and a smoother ride pay. These include wet or soft terrain, slopes, or longer skids. Tigercat says the new 635D is the most advanced high-production skidder they’ve ever made. Power is now via a 260 hp Cummins QSB6.7 Tier III engine versus the 8.3 L engine in the C series. Yet thanks to improvements in the hydrostatic drive, the 635D offers better performance and lower fuel consumption from the smaller engine. A Flexxaire variable pitch/reversible engine-mounted fan improves fuel efficiency further by automatically matching blade pitch to cooling requirements. Many DEMO visitors spent time in the large cab, where a rotating seat with two position mechanical lock gives full rear-facing drive capability. The old steering wheel is gone (that’s so 90s), replaced with low-effort armrest-mounted joysticks. www.tigercat.com 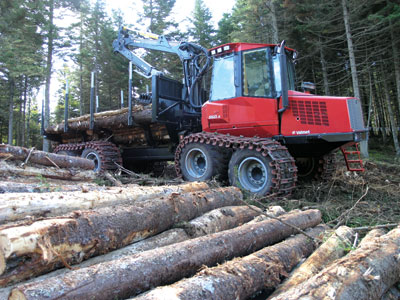 While human nature is to look at the shiny stuff up top, the really big news around the Valmet 860.4 forwarder is underneath. There you’ll find the new Valmet Comfort Bogie, which the manufacture says improves handling and maneuverability on steep slopes and wet/soft ground. Komatsu Forest’s DEMO site had plenty of both, and the 860.4 seemed to have no trouble moving through it over the three days. It also provides more consistent ground pressure through the forwarding cycle, as well as advanced operator comfort. Also the Tier III engine gives 10% more tractive effort without any increase in fuel consumption, allowing loggers to have it all. By coincidence, the 14-tonne forwader’s crane has also been given a 10% boost in lift. www.komatsuforest.com