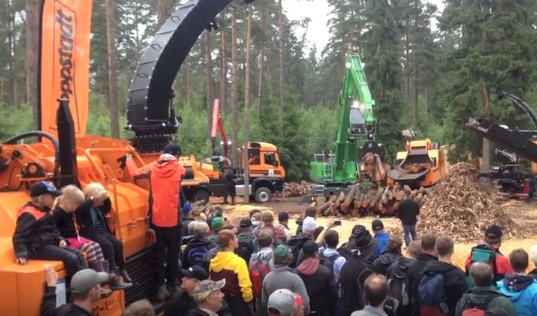 Sennebogen's equipment demonstration at Elmia Wood drew a crowd of all ages.

June 12, 2017 – A seven-kilometre stretch of forest in Sweden welcomed almost 42,000 visitors from around the world last week to view the newest advancements forestry manufacturers have to offer.

Elmia Wood is Sweden’s world forestry fair that takes place every four years. This year the fair, held June 7-10, was the largest ever with 555 exhibitors from 28 countries, covering 85,000 square metres. The crowd was able to view 143 large-scale forest machines as part of the fair’s large-scale trail, and hundreds of other equipment pieces in the small-scale and loading and transport section.

A good example of the small-scale machines taking on more is Farma, the brand of forestry machines made by Swedish company Fors MW, manufactured in Estonia. Farma introduced its new Generation 3 crane C 6.7 log trailer. The telescopic crane reaches 1.45 metres and is fixed to a 7-tonne trailer that attaches to a tractor.

On the other side many large-scale companies aimed at the European market are reducing the weight of their machines to minimize ground disturbance. Swedish company Gremo AB introduced a new full-size forwarder model at the show that weighs just 10.5 tonnes and loads 8.5.

Of Sweden’s 28 million hectares of land surface, about 23 million hectares are productive forests. Unlike Canada, however, about 50 per cent of its forests are privately owned, often as part of a family farm.

In order for those families to navigate the harvesting and selling wood, Sweden has four large associations made up of thousands of farmers. The associations help the owners manage the forests and find markets.

One of those associations, Mellanskog, has 26,000 members and 30 per cent of the country’s forestry market share. The association also operates a sawmill. The average Mellanskog member owns about 60 hectares of forests, so there is a strong market for small-scale logging equipment.

While the audience at Elmia Wood was largely Scandinavia, there was a large global presence with attendees from Russia, Canada, Brazil, Japan and Kenya, to name a few.

Operator comfort was a common theme at many booths. Logset introduced a new control system for harvesters and forwarders, the TOC 2. The harvester system’s handles have 13 buttons each so that the driver can control everything, including tree species, without moving his or her hands.

Ponsse introduced a new seat that has reinforced supports and suspension specifically designed for forestry machines.

A Drone Zone was a new element of this year’s show. Drone companies had a platform to show off what their unmanned aerial vehicles (UAVs) can offer the forest sector. The live demonstrations were popular, but for Sweden, the practical use of drones for forestry is unclear, said Jorgen Wallerman, a researcher with Sweden’s University of Agricultural Sciences, SLU.

“I think there are a lot of possibilities, but we just have to figure them out,” Wallerman said. High resolution images, and 3D images, are the future of forestry planning, Wallerman says, and so far drones are the cheapest way to achieve these images, but there are other methods of getting these images, such as satellites.

There is likely more value in using drones in Canada where there is high-value wood in old growth areas, Wallerman said.

A loading and transport section was also a new addition to the show. There Liebherr showed off its new L580 log loader, in action for the first time, and introduced its wheel loader L518 with stereo steering.

Sennebogen’s equipment demonstration at Elmia Wood drew a crowd of all ages.