While today’s world is demanding greener panel products, surprisingly much of the growth in the panel board market is being derived from Eastern European and Middle Eastern countries. And, it’s not always done traditionally. 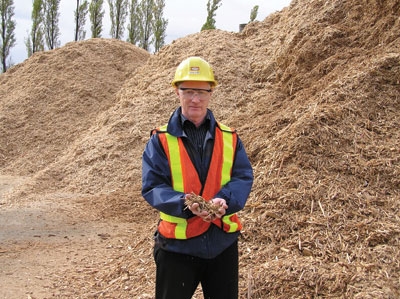 Products manager Doug Ross with some of the recycled raw material. While today’s world is demanding greener panel products

At Canfor’s decorative panel plant in New Westminster, BC, panel products manager Doug Ross tells of receiving a call from a potential Middle Eastern buyer who wanted to tour the plant a few years ago. They arranged to meet, but the buyer was a no-show. He called again to say he was taking the SkyTrain near the plant, and could Ross pick him up? He didn’t show again. A message was left for Ross that the buyer planned to cab it to the plant – only a few short blocks away.  Finally, a man appeared after being dropped off by a fellow passenger he had met at the SkyTrain. Ross didn’t have high hopes but toured the man through his operation. “We get a lot of queries from our web site,” he says, which touts the environment attributes of the company’s board as being 95% recycled wood.

After the tour, the man nodded and said, – ‘yes, give me 4,200 sheets’ – or three container loads. “That’s huge,” says Ross, adding the man retrieved bank documents as he was prepared to buy for the order to be shipped overseas. The buyer has become one of the company’s best customers, making an annual trip to the plant.

Russia, Iran, India, Romania, South Korea and the United Arab Emirates are Canfor’s larger overseas markets, which when combined with distributors in many traditional markets such as Britain, take up to 20% of production. The remaining 80% divides equally between the U.S./Mexican market and Canada.

Top Player
This all puts Canfor’s New West­minster PanelWOOD plant among the top five decorative panel producers in North America. A 69-year legacy of producing hardboard has stood the company in good stead as it has a reputation and collection of panel plate designs (which shape the panel’s face) that is virtually unmatched. “Some we have bought from other companies that have gone out of business,” adds Ross. The plant produces 40 different decorative products, which fall into three main groups: masonry, wood, and paint-able surfaces. These are shipped to 30 countries. 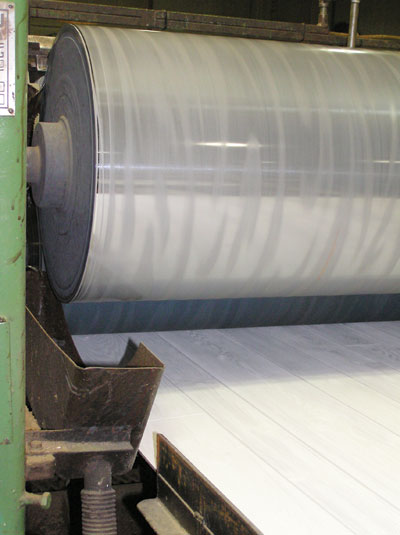 The latest addition to the line is one that provides for a rock-wall look complete with smaller stones and mortar detailing in the panel design. It’s achieved through the creative use of ground fibre, which is formed to give a rough-stone feel to the panel. But, it is a feature that takes meticulous design in making the pattern plates. Ross says that other manufacturers often remark they have been unable to achieve that same degree of detailing that lends itself to the realistic look of the panels formed.

Ross says panelling is also being used by today’s younger North American generation of home renovators, who are not jaded by the sixties-style, wood panelling that their parents grew up with. Canfor has also debuted fresh new board finishes that cater to today’s home renovator, such as an unpainted, primed texture finish that is easy to install and paint. Unlike faux finishes, this textured board can simply be repainted to create a new look.

The operation also has a green story to tell. An annual total of 22,000 dry tonnes arrives from Urban Woodwaste Recyclers and 10,800 dry tonnes from Wastech Services Ltd, both in the Lower Mainland. “We also have some smaller players that help out,” Ross says of the recycling.
This new urban logging has kept construction and clean demolition wood waste from going to landfills, and also delays the release of CO2 into the atmosphere as the material breaks down. “It will eventually break down,” says Ross. “But, we are delaying that process by producing a product that can be used for 30-40 years,” he says.

Production superintendent Geary Kitagawa says that plant specifications are provided to the recyclers, who use either a tub grinder or a stationary hog to break down the waste-wood and facilitate metal removal. Material is blended together and then brought to an in-feed chain. It then drops into a rotary feeder that blows the material to a cyclone, which in turn feeds a refiner for the wet process hardboard plant. Before the material enters the refinery stage, it drops onto a belt conveyer and passes through an electric magnet, metal detector, and is fed into a surge bin, which will feed the digester.

In the digesters, the chips are treated with 102 psi of steam to reach a temperature of 360 degrees Fahr­enheit, softening the lignin in the fibre. The softened wood pieces then pass into a Sunds refiner, which uses a thermal mechanical grinding process, passing the material through a gap between a set of refiner plates to break wood into individual fibre bundles.

The 36-in American Defibrator (installed in 1965) handling the hardboard fibre has a capacity of 75 oven dried tons a day based on a three-shift day. The plant also has two other Sund refiners – the 36-in (installed in 1980) handles the yellow cedar production while the other, a higher volume machine, is a 42-in (1982) handling material to be turned into EcoFibre.

When the material emerges from the grinding zone, it is blown by steam pressure to a secondary refiner that does the final touchup. The 36-2 Sprout-Waldron refiner mills the material into shorter fibre lengths. This refined fibre then is transferred to one of two 30,000-litre vats, with a mix of 3% wood fibre to 97% water.

The forming process is a wet one (compared to EcoFibre which is a dry process), so the consistency ratio makes it easier to pump into the downstream forming process, tells Kitigawa. The water in the vats is recycled back from the forming process. “We have flow meters on those lines so we know how much phenol-formaldehyde resin to add to the stock (at the rate of 2% solids per oven-dried ton of fibre), ” he says, adding that resin is supplied by Arclin Inc. of Kamloops, BC, formerly Dynea. Arclin is now also gaining more green approvals on its products – especially those that may end up in schools.

This resin-enriched slurry is pumped into one of five storage vats to provide a two-hour reserve on the continuous forming line in the event of a refiner problem. Forming is done on a 4-ft wide Soderhamns line. As the forming line advances, consistency is increased to 30-35%. Once there, the continuous mat is cut to length and width with high pressure water. The mats are then transported to the hot press, a unique install dating to 1965 and fabricated by Burrard Drydock Shipyards in North Vancouver, tells Kitagawa. “It is the only one they ever made,” he says. The original press had only 25 openings, but four years ago it was expanded to a 32-opening. Kitagawa says the original press was designed by one of the individuals (now retired) that worked on the press at Burrard Drydock.  The loaders and unloaders were rebuilt by nearby Raute Wood in 2002-3, whom Kitagawa says “help us out a lot” now.

The mats are cooked at 340 to 380 degrees Fahrenheit for 8.5 minutes and the press is equipped with hanging embossed plates, which press the pattern face onto the sheet during the pressing process. The press can handle up to six different patterns at once. “We run the embossed plates for three weeks on each production run (before another embossed plate change occurs),” says Kitagawa. That provides us enough panels to supply the paint line, which paints 10,000 4×8 sheets per 10-hr shift on average. Some runs such as masonry, because the embossing requires a heavier application of paint, can take longer.

Kitagawa says an average is six press loads or a production rate of 192 panels an hour.  The panels are left to cool for 48 hours, then directed into a Tidland belt sander which sands the backside for thickness. “We then store the sanded panels on the floor in loads and when we have accumulated 6,000 panels, they are cut to size on a (Mereen Johnson Machine Co.) trim-saw,” he says. Once the material is trimmed to size, it is stored in the warehouse until there is enough product to run through the paint line.

Product destined for big-box outlets in North America are plastic wrapped and shipped, while the overseas market are shipped via containers to prevent damage. Sheets of panel are kept in the back end to ensure quality control.

If there is an example of a perfect cycle for recycling fibre, it’s Canfor’s New Westminster plant, which takes wood waste collected from construction and demolition sites and converts it into wood fibre used in hydro-seeding projects. Just as wood might be left on the forest floor as biomass to sustain future forest life, Eco-Fibre is used to begin new growth as a carrier for new grass or vegetation seed. As the new growth takes root, the fibre exists as a moisture absorbing mat, and finally decomposes, adding nutrients to the site.

“It’s a dry process system,” says Geary Kitagawa, production superintendent, of the plant where the fibre is recovered, baled or bagged. The material for processing is obtained from wood waste recyclers, which collect construction site material, sort, and recycle it. Wood is processed into a hog-like consistency and refined in #1 asplund refiners. Once the fibre is refined, green dye is added and the mixture goes to a dryer tube heated by a Salton gas-fired burner.

Bagging is now automated, thanks to a new line from Willems Baling Equipment in The Nether­lands, an automatic baling, palletizing and stretch wrapping system that can produce 200 to 240 bags an hour. This gives the company direct control over the process, which was previously done off site, says Kitagawa. “We estimate we can save $1 million a year,” he says, adding that this includes the savings from not having to transport off-site  and the fact that one person operates the entire line. The other system was manual. 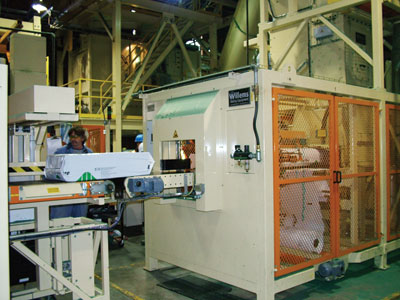 The new system includes a Willems BPV-220HL-22.5 compression baler with form-fill seal, a Kawasaki ZD130S robotic palletizer, and an automatic, in-cycle pallet stretch wrapper with top sheet dispense, all supplied by Willems’ North American dealer Creative Packaging Inc. out of Tennessee. Fred Schumpert of Creative Pack­aging tells CWP this is the first such line running in Canada, although several others are operating in wood shaving operations in the US, and of course throughout the world. 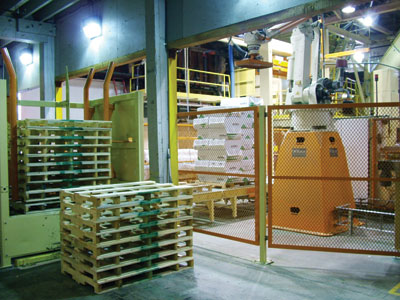 The fibre is used for hydro-seeding, but Canfor also produces a second product that mixes a bonding agent with the fibre, allowing it to set on sloped area (such as on logging roads, highway slopes, and mine site reclamation) and provide a base for seed to germinate.