It takes just a few minutes of sitting across the desk from Deon Hamlyn in the circa 1920s building that houses the offices of Kruger’s Corner Brook Pulp and Paper (CBPP) mill in western Newfoundland to discover how passionate he is about productivity and machine utilization in the woods. A few more minutes with Hamlyn, who is one of the division’s logging operations superintendents, and he is pulling electronic components and mobile satellite devices out of a storage cupboard to illustrate the progression of electronic datalogger equipment that has been developed over the years by the FERIC Division of FPInnovations. 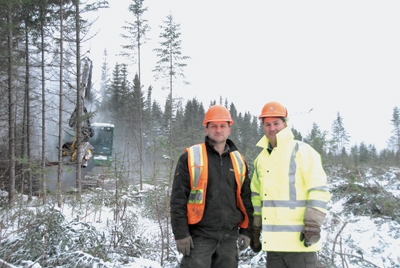 It takes just a few minutes of sitting across the desk from Deon Hamlyn in the circa 1920s building that houses the offices of Kruger’s Corner Brook Pulp and Paper (CBPP) mill in western Newfoundland to discover how passionate he is about productivity and machine utilization in the woods.

Hamlyn has been involved with FERIC on the dataloggers since the late 1990s when CBPP helped the organization develop and test MicroDat. That was the predecessor to the MultiDat system that is currently used by loggers across the country to obtain accurate information on machine productivity, which can in turn help them improve the economics of their operations.

Now, he is working closely with FERIC and one of his main logging contractors, Newfoundland’s Noble’s Lumber Yard Ltd., on the next generation of datalogger gear. “We are testing FPDat, which combines a navigation system using GPS with the datalogger collection system on a PC based unit,” Hamlyn explains. “We are essentially FPInnovations’ guinea pig for this full blown system that is still at the prototype stage.”

Adding GPS navigation to datalogger equipment isn’t new as FERIC started to include it with the Multi- Dat systems around 2005, but the older models only provided a historic record of where the machine had been, and the operator didn’t have a screen that allowed him to take advantage of the technology.

“We wanted the operators to have a functional GPS unit in the cab, so we had FERIC take the GPS out of the MultiDat systems and then we installed Garmin 276 GPS units that were then linked to the MultiDat,” explains Hamlyn.

For most of the machine operators, both union and non-union who work for CBPP, GPS became a tool they quickly took a liking to, and that has presented a unique opportunity for Hamlyn and contracting companies such as Noble’s to improve operator interaction with the new FPDat.

“With MultiDat, when an operator had an interruption in his workflow, he was supposed to enter a code that would record the reason for the stoppage,” Hamlyn says. “Quite often they didn’t enter the code so we only knew the machine was stopped and we didn’t know why. With the new FPDat system, the GPS screen disappears after five minutes of downtime and it is replaced with a touch screen that requires the operator to select the reason for the stoppage. The operator can’t get his GPS screen and map back until he touches one of the numerous choices for why the machine was idle.”

Grant Noble, a foreman with the family-owned logging business that is working closely with Hamlyn and FPInnovations, says their employees have embraced the datalogger technology, especially the FPDat, and he adds they don’t want to see the prototype equipment disappear anytime soon. “Our guys love the GPS and it would be like taking candy away from a kid if they lost it,” he says. “They have seen what this technology can do and they want more. Data- logger technology has come a long way, even from where it was just five years ago, and in our mind, there’s no turning back.”

The FPDat prototype systems, which have been installed in all of Noble’s forestry machines and are now affectionately called “the baby monitors” by the operators, consist of Nexcom computers, software, and 10-inch touch screens. But according to both Hamlyn and Noble, one of the best features with the new system is the tracking function. FPInnovations will continue working to improve that part of the system early this year and once it is fully functional, it will allow all of the operators in a block to exchange track logs and share information between equipment.

“The data will upload to the PC in the machine and that information will be shared,” explains Hamlyn. “For example, the forwarder operator will be able to view the track logs of the harvester so they will know exactly where the cut logs are located.”

Supervisors from the logging contracting companies and logging operations staff at CBPP can also monitor what is going on in the block as all information is uploaded through one of several methods and ultimately ends up on a file transfer protocol (FTP) site on the Internet. Data transmission methods include short-range RF modems that download to a download station in a supervisor’s pickup, a cell phone modem connected to a MultiDat, or a satellite modem system supplied by FPInnovations. Once the data is on the FTP site, the contractors can log in using a password-protected system to see how their crews are performing and how production is going.

For CBPP and its contractors such as Noble’s Lumber Yard, it’s a win-win situation. The contractor can take advantage of the program and the added productivity it offers, while CBPP realizes various benefits such as cutover tracking and ensuring all merchantable wood on a road network is completed on the first pass. It’s also a cost-effective program for everyone involved, and as Hamlyn points out, once the hardware and software are acquired the operational costs are minimal.

“There’s no cost for using the RF modems and even transmitting from the download stations only costs us $25 per month,” he explains. “When you factor everything in, we are confident that we receive a substantial payback over what it costs us install and operate the datalogger systems.”

Hamlyn, who describes himself as “a Corner Brook boy” who grew up in the western Newfoundland town and has worked at the pulp and paper mill for 25 years, credits FPInnovations with making the datalogger program a success.

“It was their brainchild and their Precision Forestry Group out of Pointe Claire, Que. has been fantastic to work with,” he explains. “I can call them day or night and get the information or help I need.”

But he also notes that from day one, Bruce Armstrong, who is his boss and a 30-plus-year veteran at CBPP, has been instrumental in providing the support Hamlyn needs to run the program and make it happen. And he says his contractors, such as Noble’s and others, have been 100% behind the program.

For FPInnovations and CBPP, Noble’s has been an ideal partner for the datalogger program. They have worked closely with the mill for more than 25 years and the logging company’s founder, Calvin Noble and two of his sons, Gene and Glen, actually worked for the mill when it was still under the ownership of Bowater.

“We started the logging company in 1984 after Bowater shut down its operations on the Island,” explains, Grant Noble, who is the youngest of the five boys in the family. “All five of us are still involved in some capacity, including my other brothers Greg and Graham. Our Dad has retired, but he still gets involved and helps us out as needed.”

Today, the company employs about 25 people year round and harvests 60,000 to 100,000 cubic metres of timber annually, depending on mill requirements. They primarily work for CBPP but also harvest sawlogs for the remaining lumber mills on the Island and do some logging on private land.

Noble’s is well recognized in Newfoundland and throughout Atlantic Canada for its innovation, which is one of the reasons CBPP’s Hamlyn asked the company to work with him on the upgrade to FPDat.

“Noble’s Lumber Yard has won our mill’s Contractor of the Year award four times in the past decade and they are always willing to try something new,” Hamlyn explains.

They also have a good selection of equipment that can be used for testing the new FPDat, including two Cat 320 harvesters with FabTek heads, and four Timberjack models – two 608 machines and two 759GH models. For moving the wood to roadside, they use three Timberjack 1010 six-wheel-drive forwarders, and one Timberjack 1110 eight-wheel-drive model when required.

Due to the economy, the Nobles have turned to a conservative approach on equipment purchasing and have not acquired anything new since 2007.

“The last piece of equipment we picked up was a demo 2005 Timberjack 608 with a 762 Timberjack dangle head,” says Grant. “Even though it was an ’05 model and we bought it in 2007, it was a new machine so it made good economic sense. “We decided to keep our equipment longer and stay on top of the maintenance until we see some rebound in the industry. Our oldest machine is one of our Cat 320 harvesters with the FabTek head. It is 15 years old and has 40,000 hours on it and it’s still going strong.”

With the FPDat systems in the equipment, Grant says he estimates that they are improving machine utilization by 10 to 15% over having no datalogger equipment in the machines. “Utilization is shown on the screen in the cab and as a bar and a percentage number,” he explains. “When the operator stops, he can see that number dropping. We find that with the FPDat installed, most of our machines operate at 85 to 90% utilization and there’s really no additional work involved. Even when it comes to operator training, there’s really nothing out of the ordinary required. If you can start the engine on your machine, you can run this system.”

As for the time line on the new FPDat being commercially available to other datalogger users, Hamlyn says he can’t put a date on it, but he is confident the work they are doing with FPInnovations will result in the delivery of a hit product. “We have already had FPInnovations out to visit several times and we will have them out a few more times in early 2010,” he notes. “We still have to work through things such as temperature extremes and data transfer functions, but I expect we will be able to complete most of that this year.”