When CFI met Étienne Fortin earlier this year, he was operating a multifunctional harvester in the Touladi sector about 30 kilometres north of Dolbeau-Mistassini, Que., with a smile on his face. “The quality is excellent here,” says the 59-year-old, getting out of his machine and eyeing the healthy spruce trees that jammed the cutting lot.

“I have rarely seen such beautiful wood,” adds Éric Laperrière, a forestry entrepreneur and head of the harvesting division at Groupe Aishkatsh, which was founded last year by Steeve Paul, Philippe Buckell, James Moar and Éric Courtois. The goal was to set up an integrated firm run by Indigenous entrepreneurs based on a “strength in numbers” philosophy that combines road building, loading, transportation, and forestry operations.

The four entrepreneurs brought to the table considerable experience, which they gained managing businesses such as Ilnu Gaz., a service station, and Transport C. Moar. Simon Proteau, a forest engineer with 22 years’ experience, was recruited to handle planning and site operations.

A key initial plan at Groupe Aishkatsh (which means “moving forward” in nehlueun) was to bid on lots at auctions held by Quebec’s Bureau de mise en marché des bois, so that it could begin operations in spring 2020. While elbowing out competition forced the company to keep pricing tight, Groupe Aishkatsh won auctions to harvest 263,000 cubic metres in its first year.

Groupe Aishkatsh initially began by working with Laperrière through Multi SE, a forestry firm he headed. The partnership worked so well that the two companies decided to merge.

“I had bad experiences with some previous clients and wanted to sell everything,” says Lapperrière. “Working for a general contractor provides me security. I know I will get paid on time and we can think about expanding.”

Groupe Aishkatsh also hired Les Forestiers Multi-SIM, a subsidiary of Remabec, which has three harvesting teams, to round out its roster.

When CFI visited the site in January, the division was operating two Direct harvesters with Log Max heads and a Cat transporter. They had also recently added a Ponsse Elephant King forwarder, which enables them to run day and night shifts.

“We would like to add a third harvesting kit,” says Proteau. “But first, we need to find operators. These days it is harder to find manpower than to buy equipment.”

The creation of Groupe Aishkatsh and the $7 million it has invested into its operating capacity has increased competition for existing players, says Proteau. By the end of March, the company had harvested and sold 280,000 cubic metres to Rémabec for reprocessing and distribution.

“We are happy with the results during our first year,” says Proteau, who is studying future supply guarantee contracts and rights auction opportunities. “But, we want to do better.”

More Indigenous jobs
“We wanted to create a business that would broaden opportunities for Indigenous community members in the region,” says James Moar, head of Groupe Aishkatsh’s transport division.

According to Buckell, another shareholder, Indigenous involvement is a major issue in Nitassinan territory. “Our community is not involved enough in forest operations,” he says.

Groupe Aishkatsh wants to change that by acting as role models for youngsters and facilitating integration within their different divisions. That strategy is already bearing fruit as 40 per cent of the company’s 40 employees are Indigenous.

“Many young people came back to the region to work for us,” says Courtois, who notes that some Indigenous workers feel uncomfortable in outside worksites.

Groupe Aishkatsh’s managers quickly realized one of the most obvious talent pools to draw upon was their own family members, some of whom had moved away from the community to find work. For example, Moar recruited his cousin, William Moar, an excavator operator who had been working in the mining industry, to join the road crew.

Martin-Pierre Langlais recruited his uncle, Camille, and his father, Martin, a retired municipal inspector, who helps in the transport division. “Two of my nephews will also join soon,” he says proudly.

Paul, for his part, convinced two of his sons, Guillaume and Maxime, to work with him. Guillaume operates a hydraulic tree spade, while Maxime, who is 24, is undergoing training in forest management and plans to join the team soon. 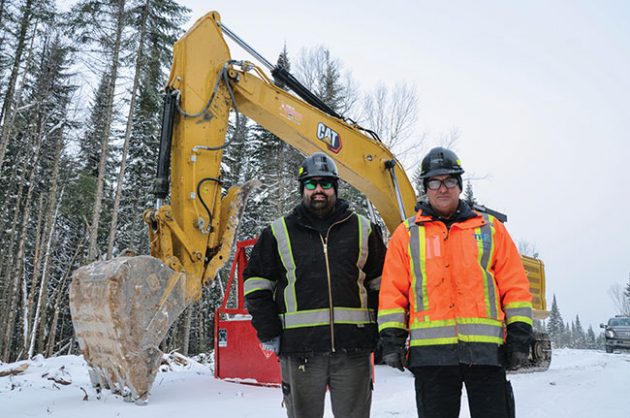 Martin-Pierre Langlois (left) and his father, Martin Langlois. Martin-Pierre is an Ilnu operator who invested in Groupe Aishkatsh’s forestry road division, while Martin helps in the transport division.

Secure employment
Company officials agree that working for an Ilnu-owned business provides an element of security for community members.

“Many young people have never seen a logger in their lives,” says Moar. “The fact that local employers can offer them a well-paid job, particularly in the woods where many locals love to work, changes the dynamic.”

The labour shortage, which has been a limiting factor on growth in forest operations in recent years, means passing on knowledge to Indigenous workers is a cornerstone of Groupe Aishkatsh’s success. This creates pressure on designated mentors such as 17-year industry veteran Marc Laforge, who provides workforce training at Groupe Aishkatsh.

While the company is proud of the large percentage of Indigenous employees, they want to increase that portion by attracting more younger worker into the sector and recruiting heavy equipment operators who work outside the region.

The partners agree that their success stems from hard work, not counting hours and having confidence.

“We started from nothing but have proved that we can deliver the goods,” says Paul. “Now, we want Groupe Aishkatsh to serve as a model for young people in the community and for all First Nations.”