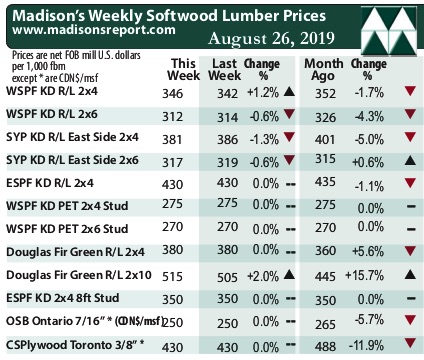 All thoughts were on Labour Day and the final throes of summer 2019 last week, as North American construction framing softwood lumber sellers were able to hold firm on pricing for most solid wood commodities. Many players were out-of-office enjoying this waning August. Following a very confusing U.S. home building season, which saw significant curtailments and down-time at several large British Columbia sawmills, the supply-demand balance has corrected.

Sales volumes were steady in Spruce-Pine-Fir, and encouraging in Douglas-fir, but weak with all other commodity groups. — Madison’s Lumber Reporter

Lumber sales and construction activity continued to pick up last week in the U.S. Northeast. This encouraged vendors, who were sick of “beating each other up for orders.” Lumber yards in the region pushed hard to clear out stagnant inventory volumes, which had been built up from June and July. Sales of green Douglas-fir 2×10 and KD 2×4 were standouts; but due to lack of supply, not a surge in demand.

The below table is a comparison of recent highs, in June 2018, and current Aug. 2019 benchmark dimension softwood lumber 2×4 prices compared to historical highs of 2004/05 and compared to recent lows of Sept. 2015: