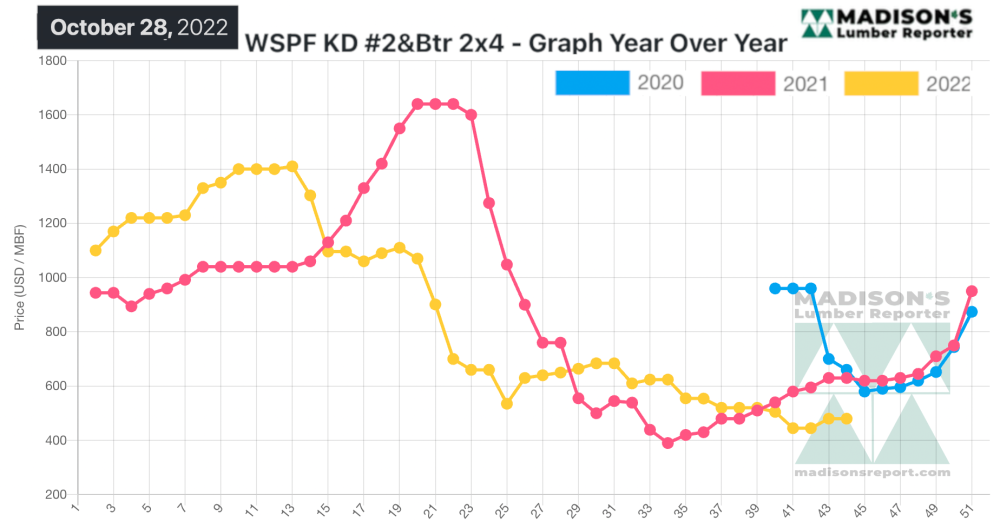 As October drew to a close, significant production curtailments at several large British Columbia lumber producers helped keep softwood lumber prices flat. Most of these operators cited high log costs versus lower lumber prices as the reason for taking this downtime. Meanwhile, it seemed that Weyerhaueser and the union came to an agreement, so the recent lack of Hemlock and Douglas fir lumber items is expected to be rectified over the coming month. These supply constraints, combined with quite low inventories in the field, provided lumber sellers with the ability to eschew counter-offers and stick with their prescribed price lists for another week, at least.

Players all over noted the importance of recent curtailment announcements from two large B.C. producers, with that development nudging many heretofore reticent buyers off the fence.

“Sales of most commodities continued to strengthen in a low-key fashion; the Weyco strike continued to throw the Hem/Fir market for a loop.” — Madison’s Lumber Reporter 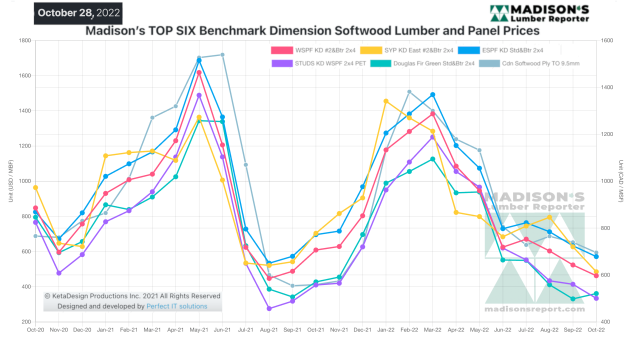 Western S-P-F traders in the United States reported diminishing sawmill offerings as the end of October neared. Prices correspondingly were at or slightly above the previous week’s levels as sawmills established order files into the first or second week of November. Six-inch dimension was in comparatively high demand. Persistently-depleted field inventories across the board were another incentive to get deals done. Demand for low grade commodities lagged behind that of #2&Btr.

Sneaky strong demand kept Canadian suppliers of Western S-P-F lumber busy, thanks in large part to momentum generated by recent curtailment announcements from two major producers in Western Canada. Sawmill lists were light to start the week and only dwindled from there. Buyers tried to remain cautious and focus on LTL deals through the distribution network, but availability there was drying up also. Asking prices on #2&Btr and High Line dimension items were flat from the previous week’s levels, or climbed between $10 and $30, as producers were firm on their numbers and no longer amenable to counter-offers.

“Demand for Western S-P-F studs rode a continued undercurrent of strength according to Canadian suppliers, even if it lagged behind that of dimension. Mills maintained firm pricing on six-inch trims while 2×4-8’s and -9’s came off $20 and $10 respectively. Buyers remained hesitant to cover more than their immediate needs, with hand-to-mouth purchasing still the most common strategy. Wholesalers and distributers were busier than mills again, and inventory among all suppliers was getting tighter with each passing week. Strong order files into mid-November and dwindling availability appeared to underscore the strengthening position of producers.” — Madison’s Lumber Reporter