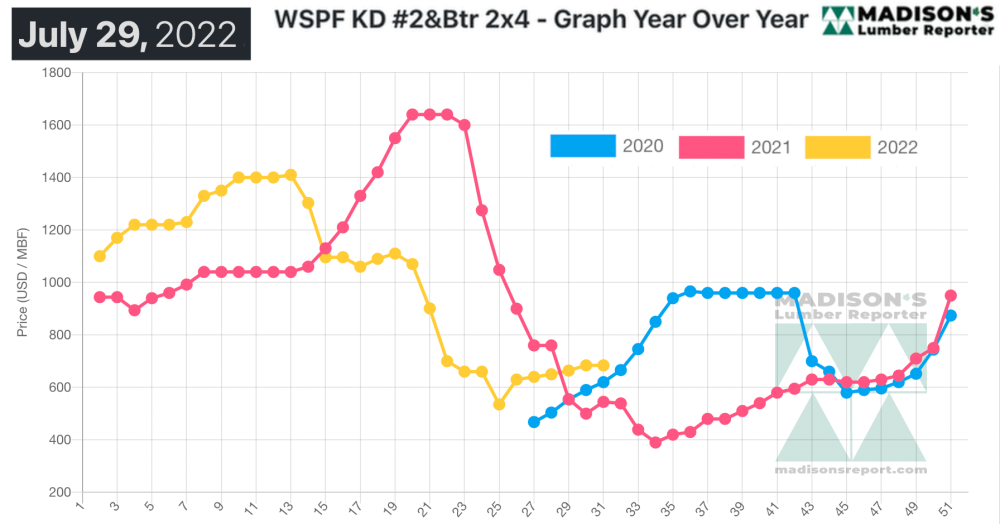 As July waned, lumber prices remained flat but players warned that muted demand and ample supply could mean lower prices on the horizon. Field inventories were strong and transportation issues — while still frustrating — were getting worked out. Highly populated areas of traditionally significant building activity turned quiet as scorching temperatures prevented most construction work. Sawmills prepare for this usual annual slowdown and turn to maintenance curtailment and staff holidays. Important in recognizing that prices might be softening is the reality that sawmills were not able to extend their order files, which had been hovering at a quite healthy two weeks.

Staying flat for two weeks, for the week ending July 29, the price of benchmark softwood lumber item Western Spruce-Pine-Fir 2×4 #2&Btr KD (RL) was US$684 mfbm. This is the same from the previous week when it was US$684, and is up by US$59, or nine per cent, from one month ago when it was US$625.

Players reported decent field inventories, further reducing any sense urgency on the part of customers. Sawmill order files were apparently no further out than the week of August 15th.

“A quieter tone permeated the market as hot weather and resultant summer vacations took the momentum out of lumber trading.” — Madison’s Lumber Reporter 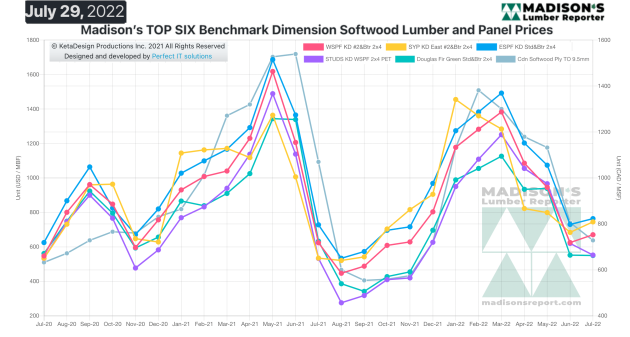 Western S-P-F lumber and stud purveyors in the United States weren’t all that surprised when demand petered out. Field inventories were in decent shape for the most part and buyers felt no pressure to do any more than cover small volumes for the short term. Construction in many parts of the country appeared to take a minor breather too, thanks to blistering temperatures that limited the time crews could stay outside working.

Buying activity receded noticeably in the Canadian Western S-P-F market. Players noted that July ended on a vastly different note than it started, with the currently softening market contrasting sharply with strong demand and sales activity seen at the beginning of the month. Demand was quiet as buyers reverted to only covering immediate needs.

“Producers of green Douglas-fir commodities held on to their prices for the time being but rumblings of a correction in the offing grew louder. Key construction markets were quieter than in recent weeks as scorching weather swept across much of North America. Sawmill order files stuck at about two weeks out amid languid demand.” — Madison’s Lumber Reporter