There’s something just a little different about Millson Forestry Service in Timmins, Ont. Maybe it’s the warm and friendly greeting you get from Nikita, the rescued shepherd cross who hangs out in the warmth of the office all day, or it might be the laid back, nothing is too much trouble sentiment you glean from Sue and Dave Millson, the husband and wife team who run the company. 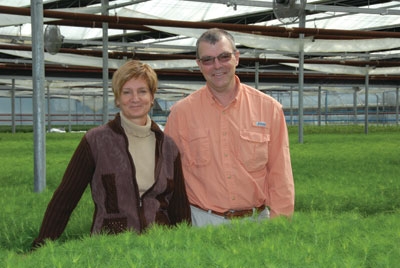 Whatever it is they have going for them, it’s contagious, and it’s working. When you talk with the Millsons’ employees, such as seed plant manager Lucille Lessard and Mark Joron, who looks after forest operations, they make you feel right at home. They are willing to jump in and help. And they all seem to have a sense of ownership for what they contribute to the company.  “A big part of our success has been our ability to surround ourselves with great staff,” says Sue, adding, “Its nice to be able to come to work every day and enjoy the people you work with.”

The Millsons do operate on a fairly unique business model — one that has evolved over the past three decades. It’s not that any one of the company’s activities are that unusual. What is unusual is the way they have packaged the services they offer. It’s what Sue and Dave like to call “seed to dump” and basically it means they provide customers with one stop shopping for everything they need, from selecting the seeds and growing the seedlings, right through to harvesting the mature trees and delivering the logs to the mill.

Growing Up
It all started for Sue and Dave in 1980 when they both graduated from the forestry program at Lakehead University in Thunder Bay, Ont. They met during their time in Thunder Bay, married, and on graduation, decided to set up shop together in Timmins, starting their business as a tree planting company.

To get things off the ground, the pair bought a well-used Lokomo forwarder with a disc trencher attached to the back end for site preparation work. Then, two years later, the Millsons made their next big leap, starting greenhouse operations. In their first year, they produced, just 250,000 containerized tree seedlings, a small number compared to today’s production. The next big growth phase for the company was in 1996 when Sue says they were looking for ways to improve seed quality. That was when they decided to build a seed extraction plant and invested in Scandinavian equipment from BCC of Sweden that opens the cones and extracts the seeds. The same year, they ventured into the logging contracting business, buying out a local logger and acquiring the contract to harvest 200,000 cubic metres of timber annually. The move also meant making a major investment in harvesting equipment and after doing their research they went with a John Deere team comprised of a 903 feller buncher and John Deere 748 skidders.

Dave says being able to adapt to the market conditions and bring new business into the company through diversification, such as entering the logging business, has helped them succeed over the years. “We look at what our customers need and then we try to find a way to economically fill that need,” he explains.

Growing Seedlings
It seems to be a strategy that has worked. Today, the quarter of a million seedlings the Millsons produced in 1980 has grown to more than 15 million annually. End uses include reforestation programs, stock for commercial nursery transplant programs, Christmas trees, rehabilitation and research projects, and in a fairly recent development, “oxygen generation” trees that are sold to the public on the company’s webstore.

The seedlings produced by the Millsons are shipped all over Ontario and are exported to the United States. They are grown in a variety of different container types, although Dave says the two most popular are multipots, which are hard wall containers that are filled with peat to produce individual seedling plugs, and jiffy pellets, which are peat pellets that are wrapped in a light gauze, allowing the penetration of the seedling’s roots. The majority of the seedlings produced at Millson Forestry are: white, red and jack pine; spruce in the white, black and blue varieties; and fraser, balsam and canaan fir. The main greenhouse on the 10-hectare site that houses Millson Forestry Service has the space to grow about 5 million seedlings at any given time. Three shade houses on the same site can accommodate an additional 10 million seedlings. All of the growing facilities provide Millson Forestry staff with the ability to control temperature, watering and fertilizing schedules, and the amount of daylight hours that can reach the seedlings, meaning they can control when the seedlings set bud.

New Growth
In terms of planting, the Millsons have gone from approximately one million seedlings in the early years to as many as four million in a busy season.  In May and June of each year, and sometimes into August, they bring 50 to 75 tree planters on board, most of them local students looking to earn money for their return to college or university in the fall. They split the group up into crews and send them to the planting sites on company-supplied buses that the students have creatively named “Green Pieces” and “Forever Green”. Each crew is closely supervised and has its own crew boss, foreman and an assessor that checks to make sure the spacing and planting of the trees is done to the job specification.

Maintaining the Forests
Once the new forests are established, Millson Forestry Service offers its customers stand tending services, which ensures the new forests can grow and develop properly. Thinning the forest and removing weed species allows the crop to get adequate water, nutrients and sunlight. The company uses a number of stand tending methods, including pre-commercial thinning, manual removal of competing vegetation, road side brushing and chemical treating.

Logging
On the logging side of the business, Millson Timber Inc. was spun off in 1997 as a sister company to Millson Forestry Service to handle conventional tree length and cut-to-length harvesting, road building and log transportation. The company’s own crews still run the John Deere buncher and 2054 Logger, which is equipped with a Denharco stroke delimber, and they also have a Hitachi processor with a Waratah dangle head and a pair of  log loaders – one Caterpillar 320 featuring a shortwood clam grapple and one Caterpillar 330 with a butt-n-top configuration. The company’s own fleet of four Kenworth logging trucks are equipped with locally manufactured trailers from Timmins Trailers. According to Dave, “the trailers are built for war and can’t be beat.” In addition to the company’s own logging and trucking crews, they hire other loggers and truckers on contract as needed. Logging customers include nearby sawmills operated by major producers Tembec, Domtar, Abitibi-Bowater, and Grant Forest Products along with True North Hardwood Plywood in Cochrane, Ont., and a smaller independent sawmill in Timmins called Little John Enterprises. 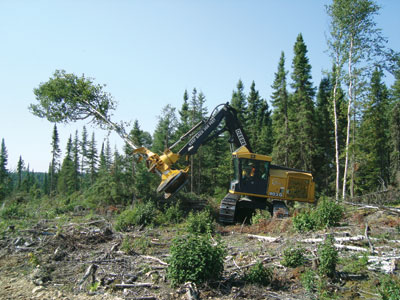 Even before the logging starts, Millson crews are busy using Trimble Global Positioning System (GPS) technology to establish the block boundaries, and the road building crews are sent in to construct the main and spur roads.  The Millsons embrace new technology and their harvesting foreman keeps abreast of the latest developments.  GPS units uploaded with block boundaries and constructed roads are used in the feller buncher so the operators can move efficiently and plan skidding distances.  All equipment-mounted GPS units produce track files, which when used with a GIS mapping system, produce valuable information on area and production. 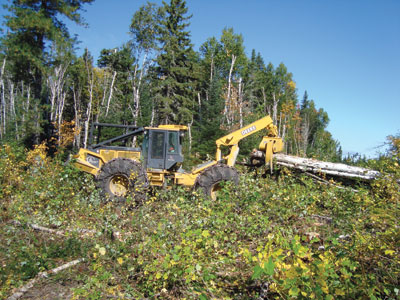 Once the blocks are logged, it’s back to where the Millsons began — site preparation and planting.  The site preparation work is done with various pieces of equipment, including gear from Swedish manufacturer Bracke, a variety of blades mounted on dozers, and TTS hydraulic disc trenchers on the John Deere 748 skidders.

This return to the beginning of the process fits well with Sue and Dave’s philosophy that forest management is truly a cycle. “We believe that a well planned approach to the life cycle of fibre management has no beginning and no end,” notes Dave. “All segments of the forest industry are equally important to properly maintain the never-ending management of a growing and evolving forest.”

The Millsons have also passed their love for forestry on to younger generations by hosting regular classroom field trips for local school kids, and within the family, their daughter Jenny decided to follow in their footsteps, graduating from Lakehead with a degree in forestry before returning to Timmins to work in the business. She also brought some new troops with her — two of her classmates.  “They bring energy into the business which is needed as the company continues to evolve,” says Sue, noting some of the recent avenues they have explored. “A new firewood processor completed a 90,000 bag contract this past summer, experimentation with essential oil production from balsam needles has led to the need for larger distillation equipment and a biomass project looms on the horizon,” adds Sue.

“They are the new generation of foresters,” adds Dave, referring to the younger additions to the company. “Although we are a long way from retirement, it’s good to know that the business and the forests we manage today will be in good hands and will be here for this new group when we hang up our hard hats.”