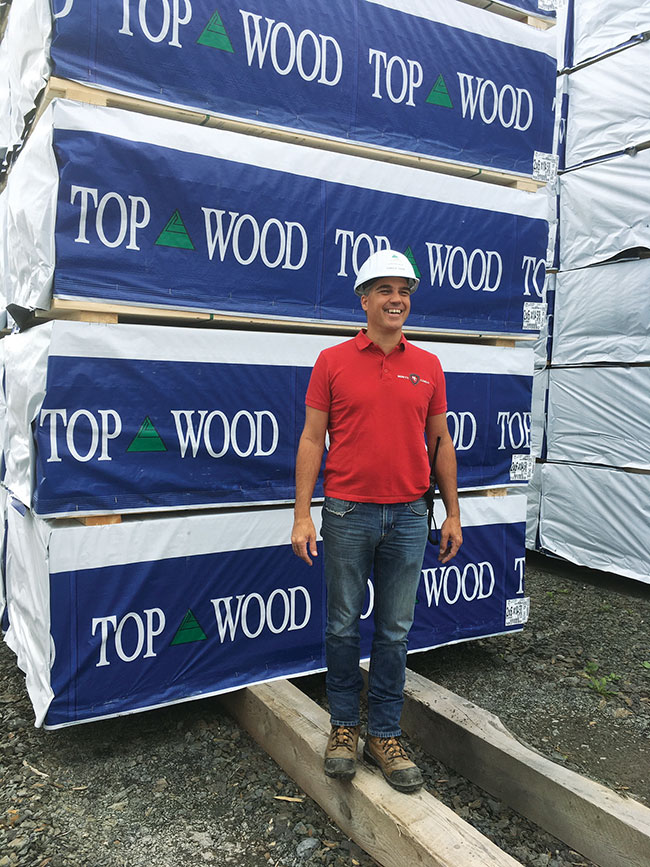 Groupe Lebel’s investments in dryers, a new boiler, modernization of the sawing and planing lines and other improvements at its Price sawmill have generated significant productivity gains during the past five years.

In all, the company has invested $8 million in facility improvements.

“Our sawline, which dated back to 1995, was becoming obsolete,” says Yannick Caron, the manager at the 70-employee eastern Quebec sawmill, which has been part of Groupe Lebel since 2008. “We wanted to boost production optimization and control. That meant changing or upgrading much of our equipment, migrating from hydraulic to electric powering and adding next generation Autolog optimizers.”

The Price mill boasts two sawing lines, a nine foot and a 12 foot, the latter of which was modernized as part of upgrades stemming from a nearly $3 million contract awarded to Sawquip.

Migrating the engine from hydraulics to an electrical system provided a considerable efficiency boost, Caron adds. “We can now operate at more consistent speeds. Previously there would be variation based on oil temperatures or when leaks occurred.”

These changes enabled the sawmill to improve its wood yield from 3.6 to 3.35 cubic metres of inputs/mfbm of wood produced. Production also improved, with speeds increasing from 11 to 17 logs per minute. The mill now produces one million fbm per week. 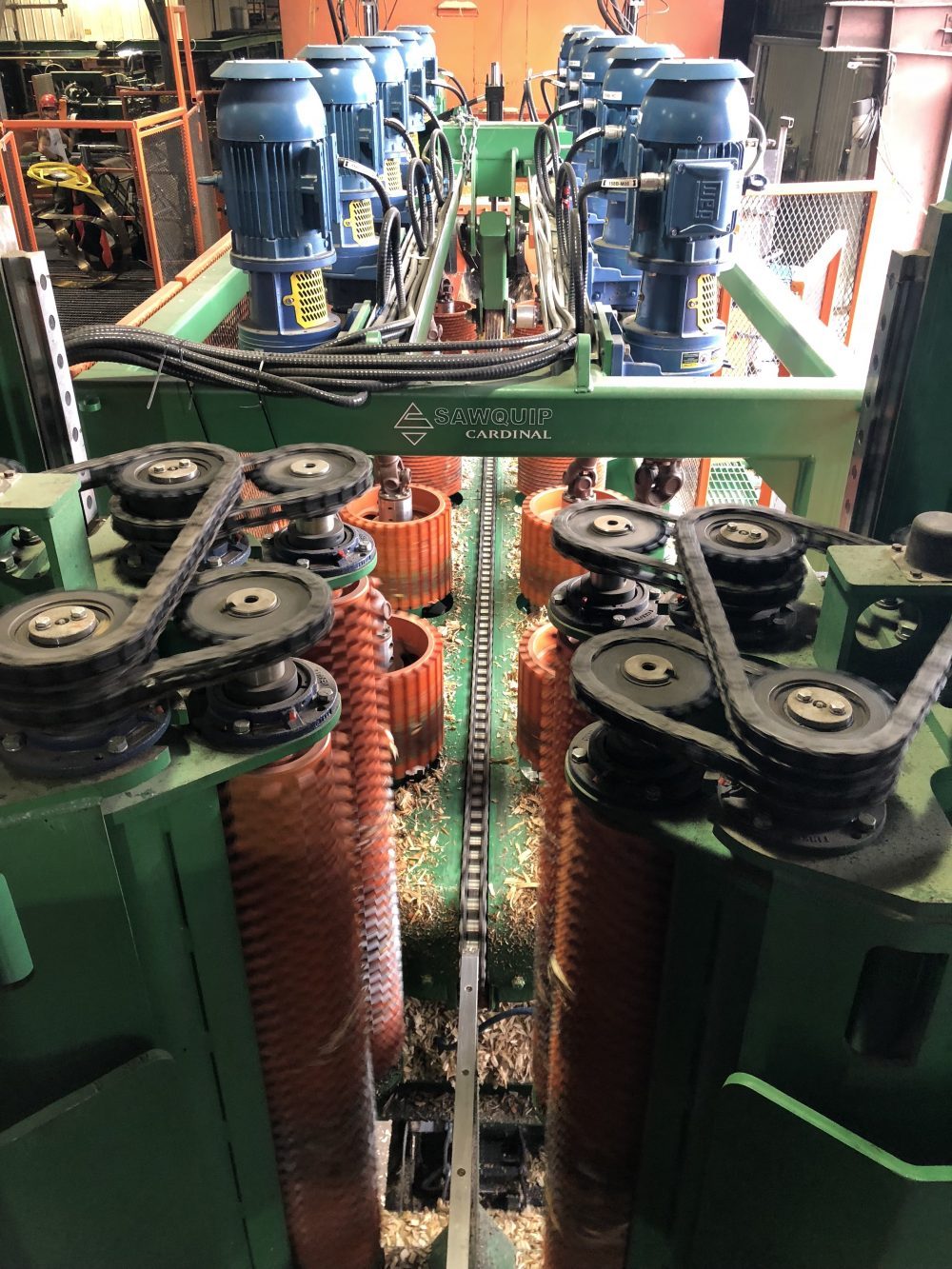 The mill’s recent investment in its 12-foot sawline included a new V-chain log infeed conveyor and log turner and a 10-axis profiler, all from Sawquip. Photo courtesy Cardinal.

Despite all of the changes, it took just two months to achieve the sawmill’s production targets. “We use the same sawing and planing equipment, including the trimmer optimizer, the sorter, and the stacker,” Caron says. “When we did this project in 2011, we proceeded based on the volume that we had at the time, which was about 200,000 cubic metres per year. We managed to produce at that pace by maximizing the capacity of our equipment.”

The fact that the sawing and planing departments can’t operate at the same time means that the mill saws wood for a period of two weeks during the day shift, followed by two weeks at night. “We have learned to work with this constraint and to profit from it,” Caron says. “Regarding maintenance, we always have the ability to do work, during day or night. I can also do tests on the log turner or the optimizers.”

Modernization work was completed in early August and just two months later the line was in full swing.  The Carbotech trimmer was modified to adjust the different settings needed for rough timber and planed lumber, as the latter category requires more precision, Caron notes.

The planer infeed was also automated last year by AMS Industriel and Desco. Today the plant sees between 1.2 and 1.6 million fbm per week. Only 2×4 and 2×6 between nine and 12 feet are planed at Price. The rest of the wood is sold green or is dried at Groupe Lebel’s Saint-Michel-du-Squatec sawmill. The wood is then sold to Canadian and U.S. markets under the Top Wood trademark.

The Price sawmill will also be getting a new GEN3 optimizer from Autolog – similar to one recently installed at Clermont Hamel’s sawmill in Beauce, Que. – before the end of the year. “After only two months in operation, with little change in the usage parameters or the implementation of the new features, the value of the wood coming out of the mill has increased and better cants are being forwarded to the optimizer,” says Yvan Rainville, Autolog’s vice-president of sales and marketing.

For example, the GEN3 optimizer assesses up to 180 reference points on the wood, instead of the usual 20. This reduces the need for traditional extrapolation methods to evaluate the actual shape of the log and makes it easier to analyze, evaluate and determine the best possible processing solution. An additional quality management tool enables operators to send the log being studied to the optimizer and simulator simultaneously. According to Caron, these new optimizers are expected to reduce wood inputs to below 3.3 cubic metres/mfbm. 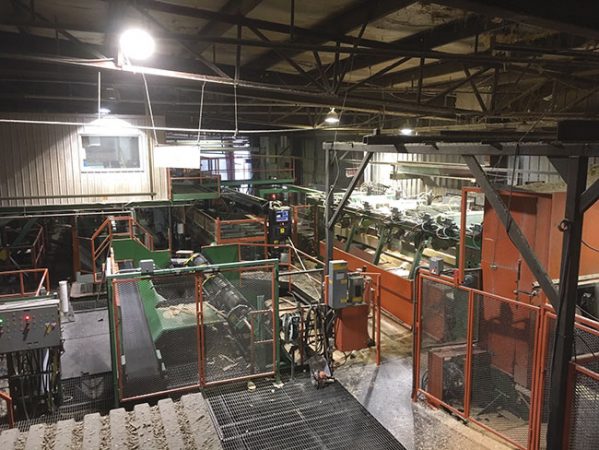 The Price sawmill has invested $8 million in facility improvements over the past five years, but is still facing the industry-wide shortage of skilled labour. Photo courtesy Groupe Lebel.

Five years ago Groupe Lebel also invested $2 million in a new boiler and new kilns, bringing the total up to six. The additional drying capacity is needed as 75 per cent of the mill’s volume is fir, which takes between 100 and 140 hours to dry, compared to the 40 to 60 hours needed to dry spruce.

Acquiring a new HC Vidal boiler, which is used to power the six kilns, provided the sawmill an end use for its bark. Its two older boilers consumed only sawdust. Today just one of the older boilers is used during the winter months while the other serves as a backup. “We can now burn residue that has no value and sell what does have value,” Caron says. The bark needs to be dried for a month to get its humidity rate down to 30 per cent before it can be burned in the boilers.

“These investments enable us to dry an additional 400,000 fbm each week. Output now varies between 1.4 and 1.6 million fbm per week,” Caron says. Nearly 60 per cent of the planed wood produced at the sawmill is dried on site, as is wood that comes from the company’s Cap-Chat sawmill.

“We are constantly trying to improve,” Caron says. The facility also invested $300,000 to build a concrete slab on which wood chip delivery trucks can be parked, solving a key space problem. The upshot is less wastage and fewer contamination issues. 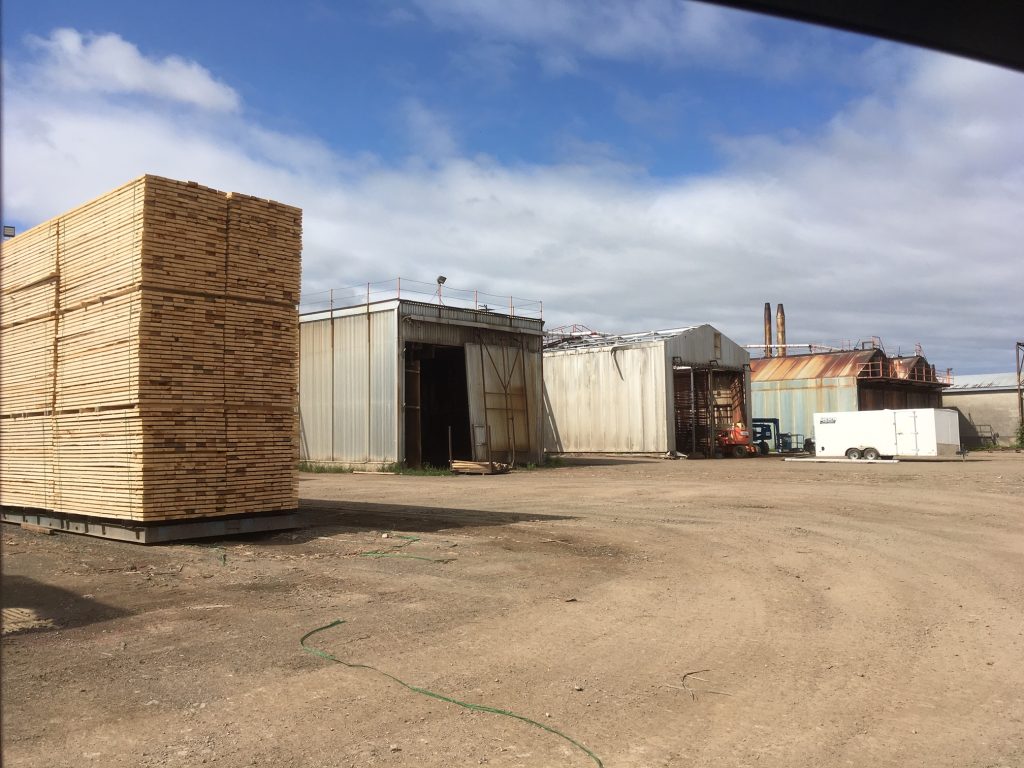 Groupe Lebel has invested $2 million in a new boiler and new kilns.

Caron believes that the lack of skilled labour will be one of the mill’s biggest challenges in the coming years, a common industry concern. “We are looking for four electrical mechanics, but they are hard to find; as are boiler, kiln and loader operators.”

Other investments are also possible on the nine-foot line if the sawmill manages to find new sources of wood supply. The plant also plans to invest in new trimmer optimizers and barcode traceability equipment in the near future.

Negotiation of a new labour agreement during coming weeks with unionized employees, who are affiliated with the FTQ (Fédération des Travailleurs du Québec), is another priority.

According to Caron, Groupe Lebel, which now includes 11 sawmills, looks to the future with optimism, in part due to its ability to create synergies within the network. The company is also increasingly leveraging its extensive internal quality and production testing to learn from past mistakes and to streamline best practices going forward.