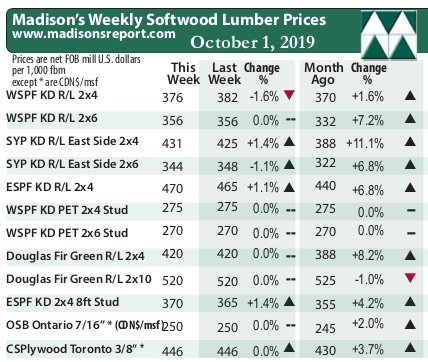 Drama unfolded large in downtown Vancouver last week, where the Union of British Columbia Municipalities annual meeting was being held. Mayors and political leaders from across the province were greeted by a convoy of 230 unloaded logging trucks arriving Friday morning to large crowds of surprised, and cheering, onlookers. The issue of reduced timber supply is hitting rural areas especially hard, so log truck operators decided to make a statement directly in the faces of decision-makers. At the same time, the BC Ministry of Forests, Lands, Natural Resource Operations and Rural Development released the “State of British Columbia Forests 2018,” which provides full data update for the harvest, manufacture, and export of B.C. wood fibre resource: Economic State of B.C.’s Forest Sector 2018

Lumber prices moderated down slightly on some construction framing items, but stayed flat on most solid wood commodities. Producers of lumber price benchmark item Western Spruce-Pine-Fir KD 2×4 #2&Btr, lowered their asking prices by six dollars to U.S. $376 mfbm. Canadian WSPF producers adamantly refused to take any more counter-offers on any item. Oct. 14 order files prevailed on nearly everything, with at least one sawmill mentioning a notable lack of 2×8 supply, saying they hadn’t had any all week. Wet weather continued to prevent a few sawmills in British Columbia and Alberta from getting enough logs, so much so that another facility was down for at least a week. Keep reading to find out more:

After increasing by six dollars the previous week, this week’s benchmark lumber commodity Western Spruce-Pine-Fir KD 2×4 #2&Btr price was U.S. $376 mfbm, down -$6, or -1.5%. This might be an indication that the latest sawmill curtailments have taken enough production offline to bring the supply-demand balance to an even keel. This price is up six dollars from one month ago, when it was U.S. $382 mfbm. Further narrowing the gap from 2018, compared to one year ago this price is down -$20, or -5%.

Players noted that stud mills seemed to be going for increasing order files, rather than price jumps. — Madison’s Lumber Reporter

Prices of studs were flat, but those items sold with consistency all week. Production bookings at stud mills were up to three weeks out on kiln-dried Douglas fir.

In Quebec, overall sales of Eastern Spruce-Pine-Fir lumber slowed down last week. Most customers had taken care of their short term needs over the preceding four-to-seven business days, but perpetually low field inventories indicated that they’d be back at the ordering table before long. Two-week order files prevailed, as sawmills reported annoying but not unnavigable kinks with transportation.

The below table is a comparison of recent highs, in June 2018, and current October 2019 benchmark dimension softwood lumber 2×4 prices compared to historical highs of 2004/05 and compared to recent lows of Sept. 2015: