When markets get tough, it helps to have some historical perspective. The folks at Finning (Ca­nada) have plenty. Not only was the Caterpillar distributor founded in the depths of the Great Depression, but as it celebrates its 75th anniversary this year, it does so with a team of forestry specialists at the helm that has been through a downturn or two. They’ve also seen a few recoveries, plenty of growth, and a fair bit of innovation. 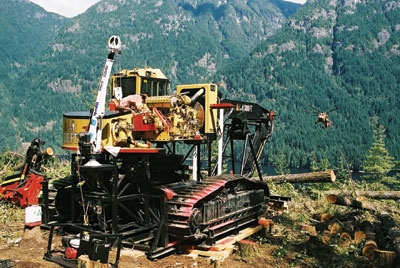 When markets get tough

Case in point is Brian Mulvihill, who started with Finning’s Alberta predecessor R. Angus Equipment in 1985 after a few years working for a BC forest products company. Trained in forestry, he came to Finning when it acquired Angus in 1989, and now is part of Finning’s forest industry marketing team out of its forestry office in Surrey, BC. CFI Magazine dropped in on Brian in mid February to talk a little about Finning’s storied past, but the veteran forestry marketer was even keener to talk about challenges and opportunities moving forward. Like any good equipment dealer, it all starts with the customer.

“Our customers on the forestry side have changed dramatically over the years, and certainly there has been a major shift since I started with Angus, and then Finning, in Alberta,” Brian says while looking over some historical photos on his laptop. “Primarily it’s been a switch from farmer-loggers or mid-sized loggers to more professional logging contractors. The volumes are bigger, and the operations are run less by feel now, and more by numbers and production. It has become less of a lifestyle and more of a complex business.”

That in turn has changed the way Finning does business. For starters, these production-focused loggers have become increasingly risk-averse over the years, interested less in helping to create the next generation of logging gear than in using proven gear to get today’s production to roadside.

“The margins are thinner, and based on maintaining a set, high volume,” Brian explains. “Few have the funds, or even the time or staff, to develop new equipment, or help us test new ideas. If you look back at our past, or the past of the industry as a whole, a lot of the equipment development came from innovative loggers who’d come to us with prototypes or ideas to test. That’s not the case now. Innovation has to come from the equipment manufacturers or larger distributors like us, and we have to come to the table with tested, reliable solutions. Today’s loggers can’t afford to be our guinea pigs.”

Nor is it all about relationships anymore, as clients may be friendly, but are definitely more demanding. Of course their own clients – the mills – have become more demanding in turn, focusing on cost control, tracking machine production and uptime, and asking loggers at the same time to take over increasing responsibilities in safety, environmental regulations, quality control, and more.

“Loggers are being asked for more,” Brian adds, “and at the same time are faced with rising costs for fuel, labour, equipment, etc… They’re looking to us for some of the answers. Parts inventory and uptime solutions are of course bigger now than ever, and Finning has based its business on this. We’ve always been an industry leader in parts support, but now we have a greater emphasis on training, we have turn-key equipment maintenance options, and we have 24-7 technical support lines in central locations that any logger can call to help troubleshoot a problem. Even a decade ago I could never imagine a logger calling a centralized number for technical support, but now it’s an option you’d better be able to
provide.“

The irony, he adds, is that while forestry customers arguably have the greatest need for such remote support and uptime tools, they are collectively among the last adopters. “Perhaps it’s the independent philosophy, or that they are used to making do on their own, but with few notable exceptions, logging customers are slower than other groups to adopt these new technical support tools.”

Still, they are there when the time comes. Other areas where customer expectations have changed include less risk in equipment selection. Gone for the most part are the days when a logger might own 30 pieces of gear from 10 different manufactu­­rers, for an equipment yard that looked more like a rainbow than a fleet. Now loggers are focusing on parts commonality and the business benefits of running a fleet with just a few different brands or model numbers.

A good example is long-time logger and Finning customer Niel Graham from Cochrane, AB, whose company ESC Harvesting owns 10 pieces of gear, all Cat forestry iron. Even processing heads are common, all tried and true Waratah HTH 622Bs. It’s easy on mechanics, and even easier on inventory capital, as he has just a few models to support and keeps on hand only those parts “likely to break.”  For the rest, he expects Finning to be fully stocked, either in its main parts depot in Edmonton, or via Cat’s own parts depot in Spokane, WA. He also takes full advantage of 1,000-hr service checks from Finning, both to maintain trade-in value and to avoid any surprises.

Such fleet clients are good business for Finning, no doubt, but the risk should you disappoint is higher than just losing the next deal. For his part, Niel is rarely disappointed.

“This kind of fleet commonality has been around in other industries for a while, and it really makes sense,” Brian admits. “It wasn’t that long ago when there were some 25 harvesting heads out in the field, for example, and some contractors might have four or five different models on one site. How do the contractors and dealers maintain a local parts inventory for that? It was a challenge even for a dealer like Finning.”

Safety First, At Last
If Finning’s clients are getting less emotional and more business like when it comes to spec’ing and running gear, one area where emotions still run high in parts of western Canada is safety. Brian acknowledges that despite mechanization, BC’s forest industry still sees far too many accidents, fatal or otherwise (for a variety of reasons, Alberta has fared better). He adds that up until recently, even Finning’s own performance was far from stellar.

“The forest industry has really started to shine the light on safety in recent years, and we had clients, both in forestry and elsewhere, looking at our own safety record, and telling us we’d have to shape up if we wanted to continue accessing their sites as suppliers. That was a real wake up call, and it has forced us to confront the issue, and the attitudes causing it, up front. Our executive placed considerable resources on developing a safety culture which has proven to be very effective.”

The results have been encouraging, Brian reports. As recently as 1999, Finning (Canada) saw over 100 lost time accidents, for what Brian calls a completely unacceptable incident frequency of 4.5 (per thousand employees). He recalls that back then, just getting branch employees to wear safety glasses was a struggle. Today, it’s a different environment.

“Our target in 2007 was an incident rate of 0.20. We were disappointed, as it ended up at 0.28. So we expect to do better, but we’re not even in the same order of magnitude we were.” In January 2007, Finning took another big step in the shift from safety laggard to industry leader when it implemented a cell-phone free driving policy that will no doubt become the industry norm within a few years. Even hands-free sets are banned for all Finning business travel, a policy based on extensive research on the dangers of cell-phone use at the wheel (see www.cellphonefreedriving.com for more on this).

If safety is a constant challenge, Brian identifies some new industry challenges coming down the pipe that he and his fellow forestry folks at Finning hope to turn into opportunities. Chief among them is western Canada’s endemic labour shortage, an ironic concern for an industry currently in recession.

“The focus in forestry now is on the lay-offs, and the effects on remote communities. That’s real, but when the industry recovers, the real concern for a very long time will be finding people, not jobs. We’re at the cutting edge of this new reality, as we do business in the Alberta and BC resource sectors. Our customers have a high turnover in operators and mechanics, and it’s going to get worse. How’s a logger working up near Lake Williston going to keep heavy-duty mechanics on staff? That’s a huge challenge, but I think
it can be a huge opportunity for an innovative supplier as well.”

He sees a number of avenues Finning and Cat can take to ease the staffing burden of its clients, from machinery that boast a much simpler operator interface and shorter learning curves, to remote mechanical support services and more sophisticated remote troubleshooting services.

This long-term thinking is yet another example of both Finning and Caterpillar’s commitment level to the forestry market, despite the current North American wide downturn and inevitable restructuring. It hasn’t always been so. Some may recall Finning’s near-exit from forestry back in the last major downturn in 1990. It is not a scene likely to be repeated this time, Brian says.

“It took us five years of hard work to rebuild the forestry division after the 1989-92 downturn – to get the right people and skill sets in place, industry recognition, etc… The people that had to do all that legwork and rebuilding are now in upper management here, and they remember the effort, so you can be sure they don’t want to go through that again. We’re going to be in this industry right through it all.”

He adds that it also helps that Caterpillar itself is committed to the global forestry market at a higher level than ever before. He cites the acquisition of the Prentice-Blount line, the massive investments in the LaGrange, GA forest equipment production facility in 2005, and the steady flow of new forestry equipment as evidence of this commitment.

“I think some people thought forestry was a sunset industry back in the late 80s – You heard a lot of people talking that way. Well, forestry is not a sunset industry. It’s evolving, but it’s here for the duration, and so are we. It’s a profitable business for Finning to be in over the long haul, and we’re working to keep it that way.”