Loggers, researchers, industry representatives, equipment manufacturers, politicians and many others with an interest in the forest industry came out for the 2010 Canadian Woodlands Forum (CWF) Spring Meeting in Moncton, N.B. in early April. 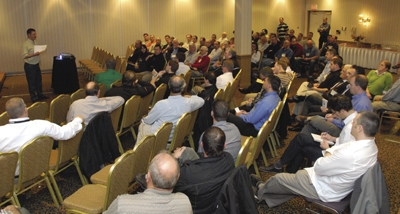 The Contractor’s Roundtable session is always popular with the CWF crowd. Loggers

The two day event, which drew 240 delegates and is the largest meeting the CWF holds every year, was kicked off by CWF chairman Mike Shea, who was followed by keynote speaker Gaston Poitras, a vice president for J.D. Irving’s sawmill division and a director and co-chairman of the Market Access Committee for the Maritime Lumber Bureau. Poitras discussed current issues, market trends and specifically, two of the most significant factors that have impacted Atlantic Canada’s forest industry – the Canada/U.S. Lumber Agreement and the “crash” of the U.S. housing market.

The remainder of the morning included regional presentations from each of the four Atlantic provinces, followed by the annual awards luncheon where Delaney & Son Pulpwood Ltd. of Nova Scotia was recognized as the Atlantic Logging Contractor of the Year.

Two concurrent sessions were held in the afternoon. Deon Hamlyn of Corner Brook Pulp and Paper in Newfoundland moderated the always popular contractors’ roundtable, where equipment owners hold a candid session with representatives of the equipment manufacturers and dealers, while Glenn Keays moderated a technical session that covered Canada’s Cap and Trade program, sustainable energy wood supply, and more. The day was capped off with a Log-A-Load for Kids fund raising dinner that raised more than $5,100 for the cause.

Day Two included two concurrent sessions in the morning. One session, which was sponsored by FPInnovations and the Canadian Wood Fibre Centre, focused on silviculture and harvesting issues, while the second session covered topics from safety to financing. Following the sessions, many participants ventured across town to the Atlantic Heavy Equipment Show, which was held at the Moncton Coliseum Complex.

“It was a great couple of days for our members,” adds the CWF’s executive director Peter Robichaud. “We had an optimistic and charged crowd that is looking forward to improvements in the forest industry and this year’s meeting gave many of them a chance to network and discuss the future with their peers.”