OK – Mettons en marche cette usine!” shouts John Kapel in fluent French. It’s been an exciting but exhausting few weeks for Kapel as he has been putting the final touches on his baby – a new sawmill in Timmins, Ont., that is owned by his company, Little John Enterprises Ltd. The English translation for his words – “OK – Let’s get this mill going!” 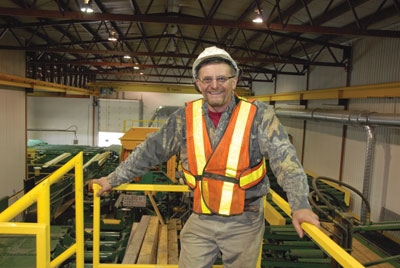 John Kapel on Day One of his new sawmill in Timmins OK – Mettons en marche cette usine!” shouts John Kapel in fluent French. It’s been an exciting but exhausting few weeks for Kapel as he has been putting the fin 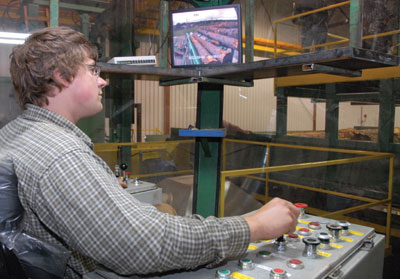 Today is the big day for Kapel and his crew, which like the population of Timmins, is a mix of English and French speakers who converse comfortably in either language. They are going to start up the mill, but they are already a bit behind after the lights went instantly dark and the humming background noise of the machinery went eerily quiet earlier in the morning. “Something has knocked the power out,” explains Kapel in his native English. “We will get it going again shortly,” he promises. Sure enough, within 10 minutes, the electrician has worked his magic and the mill springs to life. A few minutes later, Kapel’s 18-year-old son Andrew presses a few buttons in mill’s main control booth and the logs start to move. They have success. There’s still lots of fine tuning to do, but the mill is running. It’s Day One – August 28th, 2009.

The new mill has been seven years in the making and four months in the construction stage. “I have been picking up pieces of gear, grabbing useful items, and bartering for over seven years,” Kapel explains. “I would pick up bits and pieces that I thought I could use and then store them in the mill yard until I had the cash to refurbish them.”

Kapel says a large portion of the equipment that went into the new mill came from the Baronet hardwood mill that was located southeast of Quebec City. It was a fairly new mill when it was shut down with much of the equipment coming from Cardinal Distribution Inc. in Angliers, Que. “We bought pretty much the whole plant, had Cardinal dismantle it for us, took what we wanted and sold off the rest,” Kapel says. “It was 23 tractor trailer loads of equipment and then we had quite a few days of good discussion with Cardinal on how we were going to make this equipment work with other equipment we had previously picked up for our new mill.”

Other major pieces of equipment that went into the new Little John mill include a 35-inch Nicholson debarker that was refurbished by Kapel and equipped with new Omron PLCs supplied by Cardinal, a Cardinal refurbished 18-inch VK debarker, a pair of almost new double cut PHL bandsaws, a Cardinal-supplied Mudata scanner and positioning system for the carriage that Cardinal’s service manager Raynald Bernèche says, “is very effective technology at a very competitive price,” a Silvatech positioning system on the resaw and edger, and a Cardinal program on the trim saw line. Cardinal also built a brand new 24 ft. log deck and step feeders for the mill.

This is not Kapel’s first mill. “It’s actually the fifth mill I have built,” he says with an expression that tells you he just loves this business. “My Dad got me started when I was 15. He bought me a portable sawmill to keep me out of trouble. I would come home from school, throw my books in the corner and go out and saw wood.”

In addition to the portable mill, Kapel says they had a skidder and would process what was left of the trees that had been felled for road building. He ran the portable mill for five years before building a more permanent mill at a different location. He had several mills on the existing property, including one that burnt down in a fire in the late 1990s. “We didn’t let that get to us,” he says. “We had a new mill up and running in 90 days, but we already had the vision for the current larger mill so we constructed a bigger building than we needed at the time.”

The last log was processed through the old mill on April 2 of this year and Kapel says the electrician was pulling wire and the equipment was being dismantled before the end of the day. “We spent about a month just taking out the old equipment and prepping,” he adds. “We wanted to clean everything and start fresh and we literally emptied out the building. The only thing left was the shell and the concrete floor and we even poured a new pad over top of that.”

Once the mill reaches its full capacity, Kapel says it will consume about 100,000 cubic metres of wood every year and will output 12 million plus board feet of finished solid wood products. “We will run softwood or hardwood and we will make lumber, boards, custom products and chips. If a log is within our size limitations and there is meat on it, Johnny will find a home for it,” he jokes, while adding that some of his custom work has been used at the local Montana’s Cookhouse restaurant in Timmins as decorative beams and rustic looking countertops. Kapel says in the past his bread and butter has been northern Ontario’s mining sector and he expects that will continue with the new mill. “Most mining companies don’t have a joinery shop these days so we produce value added products for them such as pallets, ladder stock and blasting plugs,” he says. “It’s as good as gold for us.”

When asked what his biggest challenge is right now, Kapel responds quickly. “It’s our Provincial government,” he says. It’s no secret in the local community that Kapel doesn’t hesitate when holding the Ontario government accountable and he’s the first to admit it. “We have done our bit,” he explains. “We have invested in the mill, hired the people to work here and now I want the right to 100,000 cubic metres of wood to keep my mill running, and I’m going to get it one way or another. Right now, I have some small allocations of wood, but come hell or high water, I’m not going to run out.”

Kapel says one way to correct the fibre allocation issue he runs into is for the producers to all work together – big and small. “I sat down with a number of the other mills in the region and said ‘we need to work together – we need each other.’ At the end of the day, success for all of us comes down to cutting costs and if we get into log exchange programs and cost sharing for things such as road building, harvesting and reforestation, we will all benefit. As sawmillers, we know what is best for our business and what will make us roll, and the provincial government should listen.” 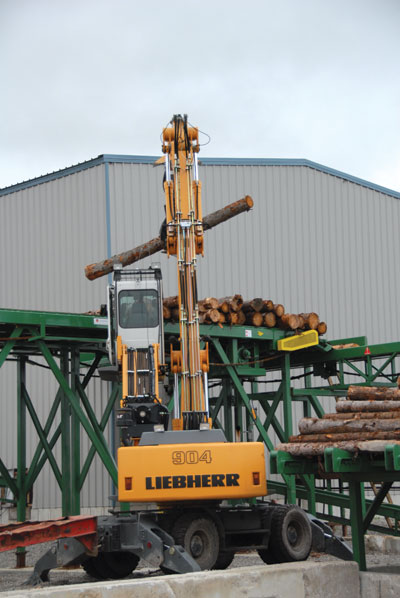 Now that the logs Kapel has in the yard are starting to flow through the mill, they will be handled in the log yard with a Liehberr 904 with a butt-n-top grapple, or a Caterpillar 950B wheel log loader. Logs destined for chips will go though the VK debarker before being fed into a 59-inch, 6-knife Precision chipper followed by a Precision chip screen. A conveyor belt will then move the chips to a large capacity 150-tonne bin before they are transported to a local pulp mill.

Saw logs are sent to the Nicholson 35-inch debarker and then to the 24-ft. log deck and the carriage line. The cants or squares from the carriage can go to one of four options – the PHL resaws for primary breakdown, the mill’s board edger, the chop saw, which can handle wood up to 12 in. x 12 in., or the transfer deck. All solid wood products go to the unscramblers and trimmers before being sent to the outfeed, which at this point is outside. Kapel says they are constructing a new building around the outfeed where everything will be packaged and loaded onto trucks.

For the past few months, the mill has had about 10 people working on the construction every day, which includes four Cardinal employees. Kapel says once the bugs are all worked out and the Cardinal team goes home, he expects they will run with 12 to 15 people on a one-shift basis.

He still has work to do, but for now Kapel is happy with the progress that has been made. “We have logs moving through the mill and we are close to being able to run  full out,” he says. “This has been a great time to buy equipment and to do the work.  We will be profitable even in this market and when things pick up we will be in really good shape,” he concludes.