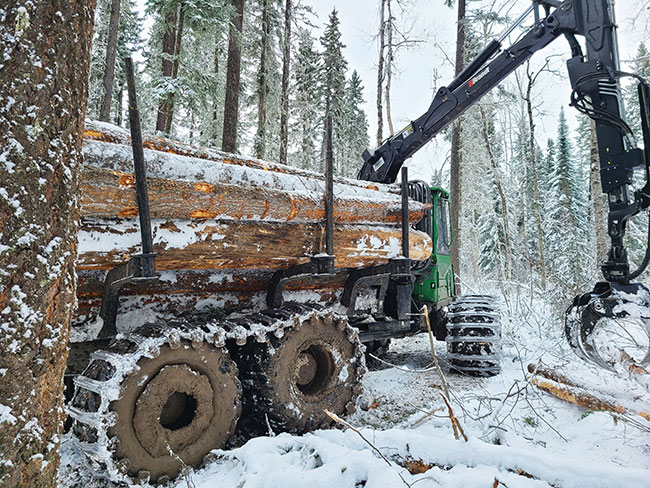 Freya Logging tries to do as little roadbuilding as possible, choosing instead to have longer forwarding distances in an effort to reduce the impact on the landscape. Photo courtesy Freya Logging.

Freya Logging, based in Prince George, B.C., is a “company of immigrants,” says co-owner Liam Parfitt. The company is owned by three families who immigrated from Switzerland, Germany or Sweden and have brought their knowledge of European logging practices, including commercial thinning, to British Columbia.

But, Parfitt and his partners never intended to begin their own logging operations on a full-time basis.

“We were only supposed to have one machine because I had bought some private property that I couldn’t get logged,” Parfitt explains. “We logged that property in six weeks, and we had another job at the end of logging our property, and it grew from there to about 25 pieces.”

Although the company has only been operating since 2016, they quickly expanded their operations. On an annual basis, Freya Logging harvests around 350,000 cubic metres of wood, with an emphasis on commercial thinning in small wood or partial harvesting very large wood. The company harvests a wide range of species, including cedar, hemlock, pine, spruce, balsam, aspen and birch.

These logs are delivered to a variety of customers in the Prince George area, including Carrier Lumber and Sinclar Group’s Lakeland mill. They also send pulp wood to Canfor and biologs to Pacific Bioenergy, and work with West Fraser on the private wood side.

To run their operations, the company employs 25 people directly and subcontracts an additional 30-35 truckers and mechanics. In the spring treeplanting season, Freya also employs up to 20 treeplanters and support people.

“We found our sweet spot for size about two years ago,” Parfitt says. “We are always focusing on constantly attracting and retaining talent; what we’re trying to do is sort of hybridize good local talent, especially focusing on young locals and exposing them to experienced mentors. We’ll hire good local people who are older if they’re available, but there’s such a lack of experienced people in the wage pool that we’ve been focusing on either training younger people in harvesting and forwarding or bringing in immigrants, particularly from Europe where training is much more developed and serious.”

Initially, the company was double shifting on equipment.

“It was a very fast ride from one to 25 pieces, so we had to look under rocks and scrape and pinch and do everything we could to put that money back into the company,” Parfitt explains.

But, in the last six months, Freya has made the switch to single shifting, and even added a few new pieces of equipment to their fleet, including a new Ponsse Elephant King. At the time of writing, they plan to add a new Ponsse Bear to their fleet in November.

This is in addition to five wheeled harvesters, three track harvesters, seven forwarders, three log loaders, three crawlers, five excavators and some other support equipment. The majority of this equipment is from Ponsse, John Deere or Hitachi, as well as Eltec, Cat, Komatsu, and Volvo. The company also has machinery from Liebherr, including a 926 excavator, and an Ecolog.

“Ponsse and John Deere harvesters, built close together in Finland, exemplify excellent qualities of wheeled equipment as they are strong, reliable and productive,” says Parfitt. “Many operators have preferences and keeping a mixed fleet allows us to match talented operators with their preferred machines. 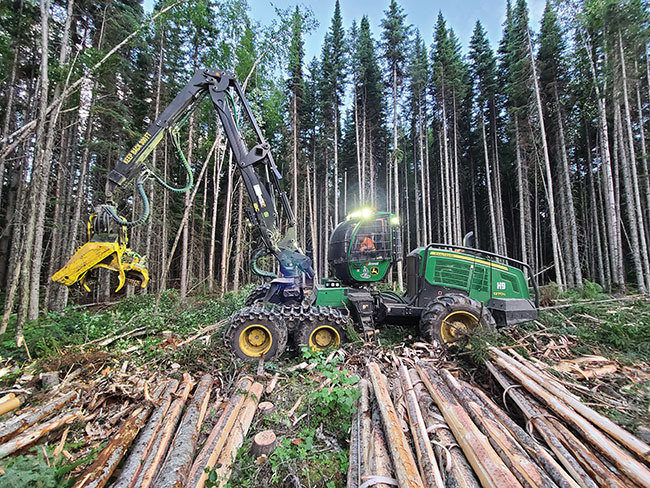 “In late 2020 we had the opportunity to acquire a fleet from another contractor – Moore’s Harvesting – and allow them to retire, which worked out well for Freya as well as them,” Parfitt adds.

The acquisition included a late model John Deere 8WD 1270G wheeled harvester, an Eltec 227 feller buncher with a Ponsse H8 HD head, as well as three forwarders, an Ecoforst winch and some older pieces. Purchasing a number of fairly new but used machines paved the way for Freya to switch to single shifting.

“It also helped Moore’s Harvesting owners Randy and Tina Moore sell all their machines at once so they could focus on their health without the stress of the auction process,” Parfitt says. “Freya believes that Randy and Tina’s commitment to selective harvest has been captured and continued in the spirit of Freya.”

Freya Logging has also invested in some equipment for the roadbuilding side of their business, including two Cat D6 crawlers, two Hitachi excavators, a Volvo excavator, and a Komatsu dozer.

However, the company tries to do as little roadbuilding as possible, choosing instead to have longer forwarding distances in an effort to reduce the impact on the landscape. More roads reduce the biodiversity of the landscape and introduce invasive species, hunters and other people who want to use the roads, Parfitt explains.

“One of the reasons we’ve been able to succeed is because roadbuilding is expensive,” he adds. “Prince George is getting wetter with climate change and I think forwarding is a much more effective way to collect wood than skidding because you don’t have to have as short of a skidding distance, and your roadside areas are much cleaner.”

On top of that, less roadbuilding helps the company free up more land to increase the annual allowable cut.

“If you can take your permanent access structure on a block from seven per cent to three per cent, that means you can increase your annual allowable cut by four per cent, and in B.C., that’s more than two million cubic metres,” Parfitt explains.

The choice to do less roadbuilding and increase forwarding distances lines up with Freya Logging’s overall goal to “be a bit disruptive to the industry.”

While commercial thinning is not very common in B.C., the company is focusing on this type of logging because they see a big business opportunity in the area.

“We’ve taken a different approach to logging. Most people get a block from the mill and they go out and log it, whereas we’ve had to create demand for our products,” Parfitt says.

“One of the ways we create demand is by doing the job and coming back several years later and showing people what it looks like. That tends to create huge demand.”

Commercial thinning has also helped Freya Logging attract new talent to their company, particularly women, because their operations are closer to town. Since women are often the primary caretaker of children, this gives female operators the flexibility they need in case a family emergency happens, Parfitt says.

Freya has also taken on tree planting contracts in 2020 and 2021 that allow the company to plant two trees for every tree harvested. This has benefited the seasonality of logging as treeplanting typically occurs in the off-season of harvesting, and has exposed new talent to the logging industry, Parfitt says.

“Treeplanting is a difficult job and requires a high work ethic and the ability to use some of those treeplanters in the logging operations is another way to deepen the talent pool,” he says. 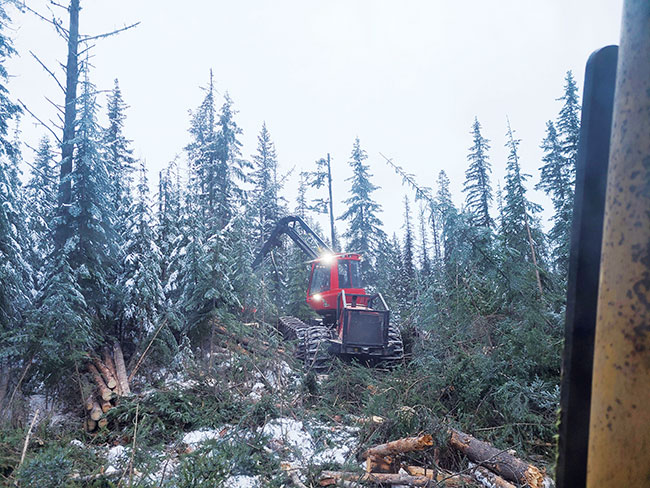 To carry out their thinning and selective harvesting operations, Freya Logging has invested in several pieces of equipment from John Deere, Hitachi, Ponsse, Komatsu and Eltec.

Commercial thinning can also have a big impact on climate change and biodiversity, which is one of Freya Logging’s top priorities, Parfitt says.

“We’re kind of pioneering what is proven technology in Europe in British Columbia,” he says. “So, there’s a real sense of doing a good thing for the planet, because selective logging is arguably one of the very best ways to improve forestry practices. It improves biodiversity and changes people’s interactions on the land, especially in how they perceive logging.”

In fact, Freya Logging recently commissioned a study from a university to explore the impact of commercial thinning on biodiversity in Prince George. The study found that there is a 300-600 per cent increase in moose activity in selectively logged areas compared to a clear-cut, plantation or old-growth stand, Parfitt shares.

“Moose are a keystone species – 80 per cent of the biodiversity in a forest is represented if you have a good moose population, and our moose population has been declining, which is an indication that we have declining biodiversity on a landscape basis around Prince George,” he explains. “So, if we change how we log and we increase moose populations, we’re probably increasing general biodiversity and the number of different animals in a stand.”

On top of that, actively managing forest stands can help reduce fire hazards, Parfitt says. This is increasingly important as wildfire seasons have become more severe due to climate change.

“If we can take some of those stands that are socially constrained and manage them in a better way, especially with a traditional, Indigenous knowledge application…I think we can increase the timber supply as well as make people feel better about logging,” he says.

“That’s kind of the goal of Freya – to be disruptive and to improve things.”

Consequently, Parfitt believes that increasingly intense wildfire seasons won’t reduce fibre supply, but rather increase it because more people will recognize the benefits of managing forests through commercial thinning.

“What we need to do is create forests that can be actioned, i.e., thinning, and then do thinning of trees of all ages, from 30 years to 200 years old, because if you reduce the volume in the stand spatially, the fire spreads much more slowly,” he adds.

According to Parfitt, decades of fire suppression has increased the density of trees, making fire behaviour aggressive and impossible to safely fight until weather patterns change.

Freya Logging has been working with the B.C. Ministry of Forests and other licensees to pioneer this concept.

“The average temperature is warming, but the summers are getting slightly cooler and the winters are getting quite a bit warmer. So, loggers don’t have to deal with the hard frost as much as we used to,” he elaborates.

The company is not necessarily looking to continue growing their operations, but Parfitt is not opposed to this if the opportunity makes sense.

“The problem is keeping things tight because it’s not a high-margin industry,” he says. “We’d grow if there was a high-margin opportunity, very carefully and thoughtfully. Having said that, my biggest concern, and I think my partners’ biggest concern, is that we have 55 to 60 people depending on us for a paycheque. We have to consider that in everything we do.”

So, moving ahead, Freya Logging will look at “constant improvement, and potentially growing if there is a quality opportunity to grow into – not just growth for growth’s sake,” Parfitt says.