Clint Lightburn, a 20-year veteran of the logging industry in the BC Kootenays, is using the province’s first Tigercat H855C harvester/processor – a purpose built machine that runs on less fuel and packs more punch – to chase the mountain pine beetle wood in the high elevation blocks. 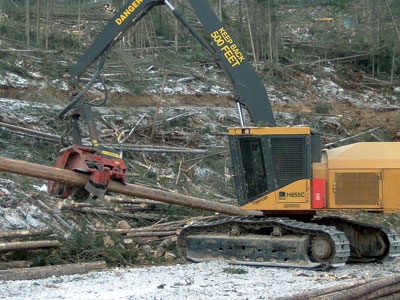 “Pretty near everything we are doing right now is mountain pine beetle harvesting,” explains Lightburn of Lightburn Ventures, a second generation contract logger who first went to work for his father’s company, Lightburn Contracting in Jaffray, BC after graduating from high school 20 years ago. Despite the problems with the US housing market, the mountain pine beetle, and competition for international markets, it’s an industry that Lightburn loved from day one. “It was bred into me, you might say,” he jokes.

But, the work today is different from what his father Fred did. “Everything then was by hand – hand falling, line skidding and hand bucking,” he notes. Today everything is mechanical rather than physical. “In some ways, I miss it,” he says, adding that at the end of the work day a person felt good from the physical activity while today much of the work requires mental rather than physical activity.

Also, today’s blocks are varied. Some are clear cuts and some require selected harvesting. The focus of the work at the higher elevation mountainsides is “getting the infested stems” out and leaving approximately a 10% stand cover for the wildlife on site. The higher elevation logging brings its own set of economics – access roads to the area, slope grade, soil degradation and stability concerns, and gaining efficient cycle times for skidding.
“You have to move more volume with less landing sites and longer skids, and run pretty lean as far as equipment goes,” Lightburn says. “And, you need a really good crew,” which he believes he has. “Without a good crew that’s eager to meet the challenges, the best equipment just doesn’t work.”

It all comes together to write the bottom line on productivity and cost per metre of getting the wood out. “I really look at the per metre cost today, whether it is felling and bunching, for the skidders, or processing,” he explains. What does it cost per meter you might ask? “This (H855C) is a more expensive machine than other processors but there is more up-time and production. and your operator is happy,” is Lightburn’s answer. Part of the operator satisfaction comes from the cab’s creature comforts, including excellent lighting for working at night, a floor to ceiling windshield, air-ride suspension seating, and climate control as well as audio systems.
One of the immediate operating savings is realized in fuel costs. “This machine offers twice as much horsepower as a generic excavator product but doesn’t guzzle fuel,” says Lightburn.

With roller coaster fuel prices hitting the industry at a critical time, the machine’s engine efficiency has the ability to mitigate that cost component and save the margin. Steve Carter,  a Parker Pacific (Tigercat dealer) sales consultant and a former logging equipment operator, estimates that the machine’s rate of consumption is approximately 50% of what conventional excavator processors use.

Lightburn first heard about the H855C from local Parker Pacific sales staff and then listened to a mechanic talk about the power-up features on this new generation of purpose-built machine Tigercat was putting out. Features such as more power, lower fuel consumption and dedicated hydraulic pumps just made good sense so he decided to try the unit. It was delivered in the spring of 2008 and he now has over 1,000 hours of operating time on clock. 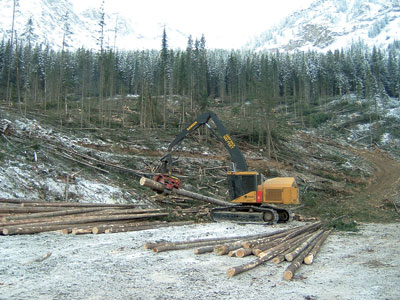 “It’s a fantastic machine,” says Lightburn. The machine can be used at roadside or a landing for straight processing, but with its tracks, it can also move easily into the felled or unfelled timber where it can either process or harvest wood. Its ability to have the undercarriage powered and still retain power to the head is a feature Lightburn especially applauds as he finds this useful not only in the bush, but also at the landing where sorts need to be done.

“They are a purpose-built processor and have twice the horsepower you see in a generic processor, he adds. “They have a dedicated pump for the head whereas a generic excavator will rob the machine to power the head.”

That extra power translates into production. “Production-wise, in our industry, there is not a processor that can come close to what this machine is doing,” he says. “With the 855 our production is 20 to 25% more because of the way it runs and the way it feeds.”

Lightburn’s unit is equipped with the classic Waratah 622B head, a favorite with most contractors in the area as it is able to handle about 90 per cent of the stem sizes seen in the higher elevation wood. “We range from a butt size of four inches to on occasion wood that is 24 inches,” says Lightburn. Stems come in lengths up to 70 foot long – it’s not short wood but mill log lengths for the Tembec mills in the area.  Pulpwood goes into chips while slash and tops go towards Tembec’s major hogfuel program, which has been expanded recently to augment the drop in residuals derived from sawmills.

Processing is done at landings or roadside, but the unit’s rugged undercarriage allows it to do a walk-about in the woods.  “We do very little roadside,” says Lightburn. When it needs to work in the felled timber, the 855 is well equipped with the unit’s high undercarriage allowing it to move easily over logs and rocks. And, he adds that the machine has plenty of power when needed for the higher elevation sloped areas or  moving on adverse grades. “Operators will often complain about the lack of power in the tracks, but this machine’s tracks have lots of power,” says Lightburn. The unit’s tracks retain power even when processing and moving and its stability on the slope comes from its long track frame and wide-stance car body.

The H855C also has a longer boom than a generic

excavator and this allows it to grab wood over a wide working circle. When the machine needs to process in the bush, in order to leave biomass on site, the longer boom is also an advantage for reaching and sorting wood. The machine can crawl to a pocket of wood on extra long skids and process on the spot, eliminating the need for the skidder to carry biomass or dead weight to the load up area.

The Tigercat H855C joins approximately 10 pieces of stock that Lightburn has actively working. To gain the best productivity, he has been careful to match the equipment to the local terrain. He is using two tracked  fellerbunchers, a Tigercat 830 and a Valmet 445. “They are purpose-built for our area where there is steeper and rougher ground,” he explains. “We do very little hand falling anymore – maybe 5 or l0% where the terrain is too steep or too sensitive.”

For skidders, Lightburn uses three John Deere rubber tired grapple machines – all 748G3 models – with one bought in 2006 and another in 2007.  He’s also using Caterpillar’s steep slope 527 skidder to forward material from the steeper areas.

Most lower elevation work takes place in the spring while higher elevation work, which includes dealing with a 20 to 60% grade, happens in the summer and winter. For Lightburn, the hand falling kicks in at a 50% grade.
One problem Lightburn finds with summer logging is over-heating issues with equipment, but with the new H855C, there is an advanced cooling system. “You are usually cleaning out the rad every week,” says Lightburn. “This past summer, the unit worked right through without any two-hour downtime to clean the radiator. The operator did it once and that was only because he was near the water hose.” An efficient Mercedes 908 engine, a variable speed cooling fan, and an auto-reverse cycle for cleaning heat exchangers all combine to keep the machine running cooler.

In order to ensure he has the best per metre cost figures, Lightburn keeps a tight financial rein on all his equipment, including the new H855C, and tracks all associated operating, maintenance and downtime costs. While he uses conventional bookkeeping to track performance and cost, he is also one of three Tembec contractors who agreed to have his machines equipped with the Forest Engineering Research Institute of Canada (FERIC, which is now a division of FP Innovations) developed second-generation data-logger MultiDAT.

Lightburn has MultiDAT on seven of his machines and he says the electronic device can measure the machine’s movement, giving a real picture of activity. Tembec staff can download the data to a terminal l00 feet away and then transfer the information to a computer. “They e-mail it to me,” says Lightburn, adding the information gives him insight into how the machine is being used on the site and whether it’s earning revenue. For Tembec, he says, it provides a picture of whether the contractor is operating efficiently – something that he is just as concerned about.

“They asked me if I would like to try it,” he says. “It’s proven to a good asset in determining productivity and on the processor it really shows if it has been working or waiting.”