Mike Hamilton has seen a lot of ups and downs in his 35 years as a logger on Vancouver Island. And although he readily admits the downturn we are currently in the midst of is worse than the low end of the cycles he has experienced in the past, he says it is not insurmountable. 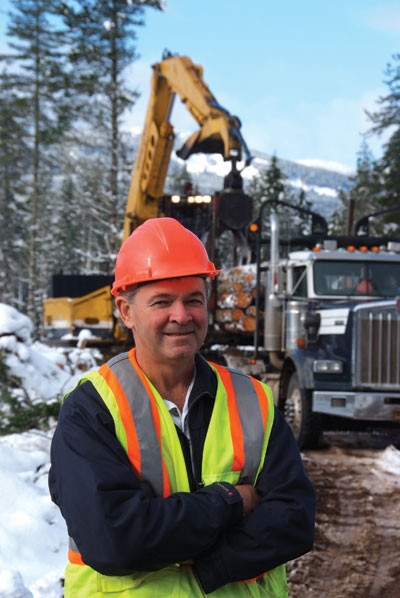 Mike Hamilton has seen a lot of ups and downs in his 35 years as a logger on Vancouver Island. And although he readily admits the downturn we are currently in the midst of is worse than the low end of the cycles he has experienced in the past

“We are definitely seeing a lack of demand for logs, but there are opportunities out there,” explains the optimistic and upbeat owner and president of Mike Hamilton Logging Ltd. in Courtenay, BC. “Most of the major companies, including our two largest logging customers, are operating with less management these days and that creates a gap that we can fill as they know we run a professional business and that we get every dollar we can out of the product we produce. We provide a log that is consistently bucked to the right specifications and we operate independently without someone looking over our shoulder. That’s worth a lot to our customers and it certainly helps us bring in business.”

Vancouver-based International Forest Products (Interfor) and Comox Timber Ltd., which sells logs in the export market and pilings and poles domestically from its privately owned Vancouver Island forestlands, are the two major customers Hamilton refers to. He has a long-term relationship with both that goes back to the days when Weldwood of Canada was a major player on Vancouver Island.

“We were working for Weldwood and were on a contract for them at Elk Bay, north of Campbell River, when they sold their timber rights to Interfor and their private land to what is now Comox Timber,” explains Hamilton. “We were able to continue working for both companies, and we have picked up other work for small business sales, log brokers and other customers along the way.”

People Focus
Hamilton, who grew up in the area where he works today, started his business like many other loggers – taking on a small contract job for another logging company. “It was 1974 and I took on a contract for a guy in Courtenay to do some falling, yarding and bucking,” he says. “I rented a skidder and worked on my own, getting the logs ready for a self loading truck that would come by and pick them up. After about eight months, I hired my first guy. His name is Hugh Hilton and he ran the skidder and then I broke him in as a faller. He is still with me today, 34 years later.”

That kind of loyalty towards his employees has paid off and helped Hamilton stay active when others are shutting down. In fact, Hamilton Logging has a number of long-term employees, with Hilton and two others at more than 30 years and another half dozen employees with 25 years or more under their belts.  Hamilton says it is a two way street – the company is loyal to the employees and they are loyal to the company.

Although Hamilton knows his reputation for quality and the experience of his crew will take him a long way, he understands the need for diversity as well. It’s another reason he has survived through this turbulent time in the industry. 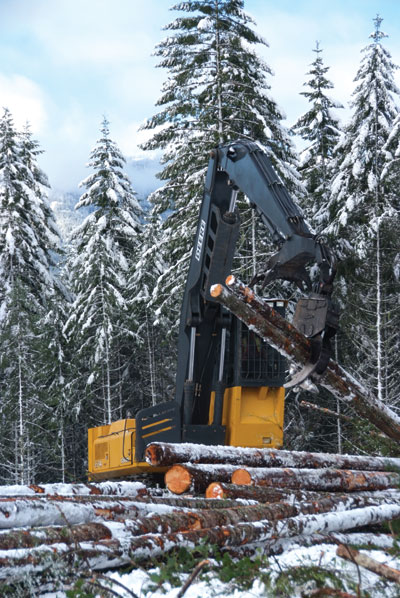 “We are part owners in the Union Bay Industries Dryland Sort, we are currently using some of our equipment and crew to build a golf course, we are active in a land company, and we have done stream restoration and pond construction work,” notes Hamilton. “We have even worked with Hollywood on occasion, providing sets and locations for movie productions, including the 13th Warrior starring Antonio Banderas,” he adds with a big smile as he talks about the movie business. “These projects all help to keep our employees working and I like to be involved in new challenges outside of the logging business.”

The dryland sort is situated on an 8 ha site just south of Courtenay. In addition to sorting logs for the one of the sort’s other part owners, veneer producer Coastland Wood Industries Ltd. which has a mill in Nanaimo, BC, the sort handles saw logs, pulp logs, peelers and specialty logs for numerous customers. A huge Wagner 120 stacker and a brand new Cat 966H log loader, along with two other Cat loaders and a John Deere 744 handle most of the product crossing the sort’s scale.

Work on par
As for the golf course project, Hamilton says it is about half way to completion and is located adjacent to and just across the old Island Highway from the dryland sort (for more on the golf course see unionbay.s3.amazonaws.com/index.html). “It’s an 18 hole championship course that will ultimately include a marina and residential village,” he explains as we walk the site that is scattered with numerous pieces of iron sporting the Hamilton Logging logo. “It’s been a really good project for us to work on and has helped keep our crews and equipment actively working. We’ve also done a lot of very successful stream restoration work on Hart Creek, which runs through the golf course site.”

The work on Hart Creek, which was home to a coal washing and storage facility from 1890 to 1940, included rerouting the stream to improve salmon spawning areas and reduce bank erosion. In 2007, following a major amount of the restoration work being completed, spawning salmon numbers in the creek were in the hundreds of thousands, up from just 5,000 in 1999.

Although the additional revenue and cash flow from non-logging work helps, Hamilton says the numbers from his core logging business are definitely down. “In a good year we will do about 250,000 cubic metres,” he says. “It’s tough to say what we will do for 2009, but I don’t think it will be a normal year for us.” 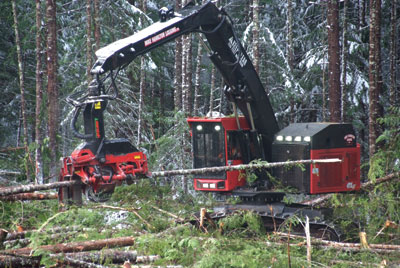 Hamilton runs primarily a mechanized logging show with only about 20% of his volume from hand falling. For the rest, he uses mainly feller processors, feller bunchers and hoe chuckers. “We tend to do things a little differently than most coastal loggers,” he explains. “For the most part, we go in first and fall the road right of way with one of our feller processors, stacking the logs on the low side of the road and the stumps and slash on the high side. The feller processor then goes in and does a first pass, harvesting up to about the first 150 feet back from the road. He can process the logs from this pass and then stack them at roadside. That creates room for the feller buncher to go in and he stacks the logs towards the road. The hoe chucker then moves the logs to roadside for processing in one turn. It is a very efficient system that minimizes handling and reduces the chance of damage to the logs.”

Hamilton doesn’t have a preference for a particular brand of logging equipment, noting that in his opinion, “it is all good gear these days.” His newest feller processor is a Valmet 475EX equipped with a 24-in Waratah head, but he also has a second Valmet and a pair of TimberJack (now owned by John Deere) machines, all with Waratah heads. In addition, his main equipment list includes two TimberKing (now owned by Caterpillar) feller bunchers, four Komatsu 300 excavators with three of them purchased in the last three years, three Komatsu 300 HD log loaders, four Hitachi log loaders, a Cat 980 front end loader, a Komatsu WA500 front end loader, and a John Deere 3554 log loader. For hi-lead work Hamilton has an American 7280 grapple yarder along with a Madill 123.

For hauling, Hamilton has his own fleet of 11 logging trucks, including seven Kenworth highway trucks. For off highway trucks, he has one Western Star, two Pacifics and a Hayes off highway model. Hamilton also handles his own road building, which last year amounted to about 25 kilometres. The Komatsu excavators are his primary tool for sculpting roads along with a Caterpillar D7H dozer.

Key maintenance
Keeping his equipment humming along in top condition is important to Hamilton. “We buy everything rather than leasing and we never sell anything,” he says. “We just run our equipment out so keeping everything well maintained is key.” To accomplish this, Hamilton has a well-equipped two-bay shop adjacent to his office in Courtenay and when times are good, he has five mechanics on staff. “Right now we have two guys and they both work day shift, but when things return to normal we will have a couple of mechanics working from 2 pm to 10 pm so that they can be doing maintenance and repairs when the equipment is not needed for logging.

Hamilton has also been a key figure in the logging community and has served on the Truck Loggers Association (TLA) board, including time as second vice president, vice president, president and past president for the organization, which represents BC’s coastal loggers. He also supports the local community including hockey and baseball, and in 2006, the company worked closely with Habitat for Humanity, donating funds and helping to build a home in Courtenay.

For Hamilton, the logging business and his side ventures have made life interesting for almost four decades. As for the future, he says he doesn’t really know what it will bring. However, he is a self admitted golf addict, so it may include a few holes on a course he has a bit of an advantage on. He helped build it.