Just six years ago, if you took a snapshot view of the oriented strand board (OSB) industry, it appeared the sky was the limit as housing starts soared above two million and OSB continued to gain market share. Producers were operating at 97% of capacity and Random Lengths noted record-setting production totals for the third consecutive year. It was also the year the rate of U.S. home ownership peaked at 69.2%. 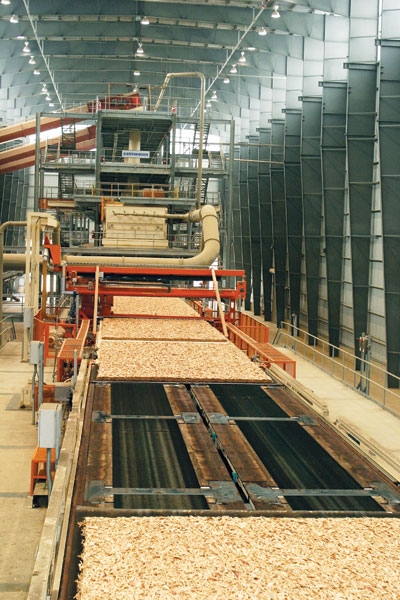 The industry’s second wave of expansion was in full swing with four new construction projects in progress expected to add another 2.35MMSF (3/8 in. basis) to North America’s OSB capacity. From that vantage it was hard to imagine what was looming just over the horizon.

A not-yet-apparent housing bubble was forming in the U.S. and it would have catastrophic and worldwide consequences. Some analysts in late 2004 were predicting a downturn in housing starts, which are the bread and butter of OSB markets.

Some had expressed concern that OSB’s meteoric growth might be flirting with overcapacity. Nearly 14 billion SF of production capacity had been added in the previous 10 years, bringing it to 26 billion by the end of 2004. The report noted there were signs the economy might also be slowing.

In fact, OSB production in the U.S. peaked a year later at 14.9 billion; Canada peaked in 2006 with 11.5 billion. Both followed the housing market into a deep and protracted recession that is now in its fourth year. From 2005 to 2009, housing starts declined 73% and OSB production fell 41%. Residential construction, which has historically been the largest market for OSB panels, is now down to less than half (46%) of total volumes, according to Craig Adair, Director of Market Research APA – the Engineered Wood Assn.

“People who make forecasts are either lucky or wrong,” observes Martco CEO Johnny Martin. His company announced plans to expand OSB capacity in 2004 and was preparing to start up its new 850MMSF facility when the housing market collapsed. Martco ended up starting up the plant in Oakdale, La., and permanently closing its existing mill at LeMoyen, La. in early 2007.
As things turned sour, construction on Louisiana Pacific’s new 750MMBF plant in Thomasville, Ala., continued but missed the originally announced late 2007 startup. Sadly, the plant’s first quarter 2008 startup ended abruptly after only two months due to a boiler explosion. The facility has not restarted, though it is being maintained for an eventual startup when market conditions improve, according to LP.

Also in late 2004, Canada’s Ainsworth acquired three OSB mills in Minnesota, which were shed as part of Potlatch Corp.’s REIT restructuring process. That boosted Ainsworth OSB capacity by 65%, bringing company wide capacity to 3.3 billion SF. The acquisition was fraught with production and equipment problems, resulting in numerous downtimes and extended shutdowns. All three plants are now among the permanently closed fatalities. Grand Rapids, which had not operated since September 2006, was permanently closed in July 2008. Production at the Cook and Bemidji facilities stopped in January and October 2008, respectively. Their fate became permanent the following January.

Overall, in the five-year span from 2004 through 2009, production capacity increased 5.44MMSF due to expansions and production improvements. An equal volume, 5.43MMSF, was removed from capacity in the same time span, with the majority of that removed in the last two years.

OSB producers have struggled to bring capacity into balance with receding demand and it appears that balance may have been reached at the end of 2009. Since 2007, the industry has shed 2.4 billion SF net production capacity and reduced operations at remaining facilities to 53% of capacity. APA – The Engineered Wood Assn. projects year-end production will reach 15.5 billion SF for 2010, which would be the first turnaround since the market collapse began. Last year ended at 13.7 billion total production, the lowest it has been since 1995.

At the moment, “all uses for OSB except residential are holding up well,” notes APA’s Adair. “In fact, our estimates for remodelling and industrial markets are larger than 2005.” Repairs and remodelling currently consume about 27%. Industrial applications make up 12%, as does non-residential commercial construction. The remaining 3% goes to export markets.

U.S. exports improved slightly over 2009 with most of that increase going to South America. Other markets include Mexico and Canada.

“We’re retrenching,” observes wood products economist and consultant Henry Spelter. “We are like somebody who has lost a leg. It takes a while to accommodate the loss but you adjust to it. I think OSB is in a similar situation.” He says that though still in oversupply, the industry is making progress toward balancing supply with today’s recession induced demand levels.

Rebound?
The sun peeked out for a while in the first half of 2010 as housing starts grew 12% and order volumes blossomed, exceeding producer expectations and driving prices up due to the industry-wide drawdown in both production and inventory. No mills reopened, but several did ramp up to full production to accommodate the demand.

After gaining a seemingly endless number of governmental approvals on both sides of the border, Georgia-Pacific recently completed its acquisition of three former Grant Forest Products OSB mills. G-P will operate two of the mills — Englehart, Ont., and Allendale, S.C. Plans are to complete construction of the Clarendon, S.C., facility and bring it online in the future.

Weather also played a part in the very strong, but short-lived run-up in panel prices. In the U.S. South, extended wet conditions tightened log availabilities and impacted operating schedules.
Random Lengths composite price index started the year out below $300 per thousand square feet as it had for the past 15 months, and steadily climbed over the next few weeks. Prices spiked to $446 and $429 in April and May respectively. It lasted only two or three weeks, according to one producer, who noted few suppliers actually sold anything at those levels. Prices imploded in June.

Spelter notes special circumstances that were a primary driver in the first half of the year, namely the $8,000 first-time homebuyer tax credit that expired April 30, are not likely to be repeated. That leaves producers still facing many of the same negative fundamentals that have plagued them for the last four years.

Double digit improvements in performance and earnings were reported across the industry in both the first and second quarters. However, a sharp drop in activity in the last half of the second quarter caused several producers to lower expectations for third-quarter performance.

In his second-quarter letter to stockholders, Norbord president and CEO Barrie Shineton pointed to a 40-year low in new homes inventory and a 15% uptick in housing starts and building permits over last year. He said, “I do believe a housing recovery is underway. And I continue to be encouraged by the longer-term demographic realities of immigration, new household formations and replacement homes that must eventually push U.S. housing demand back above the long-term average of 1.5 million starts.”

Non-residential markets have remained relatively stable during the housing downturn. “We’re not predicting big growth in these other markets,” states Adair. “We expect to see them growing with the population. OSB will probably continue to take a small share of the industrial and non-residential markets from plywood each year.”

Outlook
In July, economists scaled back their projections for 2010 due to the slowdown in job growth, continued deflation in existing home prices and the general weakness of the economy. Expiration of the housing tax credit in the U.S. is also cited as a significant factor in lowering the projection. Predictions range from a conservative 5% growth or 580,000 starts by Wachovia, to 21% or 672,000 starts predicted by Moody’s analysts. The U.S. National Association of Homebuilders projected a mid-range 14% growth or 632,000 starts, based on continued low mortgage rates, affordable prices on housing and an improving jobs market.

Looking to the future, producers expect more of the same in terms of demand. A glut of existing houses on the market still has to be worked through, and there is also the threat of more foreclosures due to ARM interest resets in 2010 and 2011. “Depending on who you believe, there is probably another 20% decline in existing home pricing,” observes Martin. “That will just exacerbate the problem of selling new homes, because the older homes will be a better value.”

APA itself reduced its housing starts projection, noting “the economy is expected to grow less in the second half of 2010, further weakening the fragile housing recovery and putting a damper on other markets as well. A meaningful recovery in demand for wood products has almost certainly been delayed into 2011.”

Editor’s Note: This article first appeared in Panel World magazine and is reproduced here with permission.