Features Forestry Management Harvesting
Safety Leader Says, ‘We Must Look at the Trends’

Following a disastrous year for safety in B.C.’s woods in 2008, initial reports from both the BC Forest Safety Council (BCFSC) and WorkSafe BC are pointing toward a significant improvement in the numbers for 2009. However, Reynold Hert, chief executive officer of BCFSC cautions that “we must look at the bigger picture,” and that means examining the trends over a longer period of time, and not just one 12-month period. 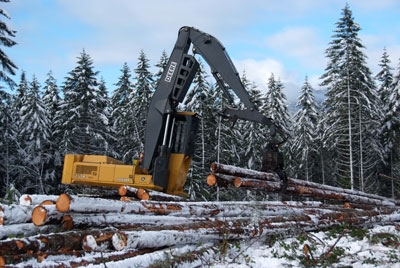 Following a disastrous year for safety in B.C.’s woods in 2008

“This whole effort towards improved safety really got started with a 10-year trend that ended in 2003,” Hert explained from his office on Vancouver Island. “For the B.C. forest industry in total there was an average of 25 fatalities annually over that 10-year period and harvesting accounted for 22 of those. That trend was just unacceptable to a number of parties, including the union, the companies, the government, and the public. The worst year was actually 2005 when there were 43 fatalities. In 2004, the council started to work with industry in a concerted effort to improve this situation and from the beginning of 2006 to the end of 2009 the average fatality rate dropped by more than half to 11. That’s the big story in my mind – seeing that trend dropping over time. You will get some years where the numbers are up and some years where they are down, so you can’t take any single year as an indication.”

In 2009, the BCFSC reported four fatalities in the harvesting side of the business, a significant drop from the 21 reported the previous year. Although Hert says 2009 was “certainly a bright light in that we have never had a year on record with under 10 fatalities,” he went on to say “you can’t look at that and call it victory,” referring to his comments on examining trends rather than individual years. On a positive note though, he added that we haven’t had any other recent period in time where the average has been this low, but added that no fatality is acceptable.

WorkSafe BC
Tom Bailey, industry labour services manager for forestry and electric utilities at WorkSafe BC was very outspoken following the release of the 2008 numbers and he was a key member of a committee the organization formed in early 2009 to try to determine the reason for the skyrocketing fatality numbers in 2008. “The industry itself decided that the progress that had been made after 2005 had been eroded in 2008 and that situation must not continue,” Bailey says. “The industry commitment to ensuring that the root causes of the accidents were identified and eliminated, in my opinion, was the single biggest success story for the industry. I believe the industry now realizes that success requires constant vigilance – by themselves – to make the workplace safe. Not just the companies, but the workers, supervisors and managers, must all commit to doing the job correctly and never assume that everything is okay. Constant attention to detail and committing to the concept of ‘do it right, do it once, do it safely,’ is a formula that will bring workers home safely each night and maintain economic viability for the industry. Industry leaders have proven that this works and it’s now up to all to embrace the concept and keep it front and centre, every day.”

Bailey credits BCFSC’s Hert with bringing many of the key players together on the issue. “Several factors contributed to the improvement in 2009 and in my opinion, these include, but are not restricted to a significant recommitment by the industry to safety and health related issues that was driven by the focused efforts of Reynold Hert and the BC Forest Safety Council,” he explains. “Senior executives from the major companies in the sector recommitted to the Forestry Accord and made commitments to themselves and the industry to implement risk reduction efforts in the field. Reynold pulled these folks together, outlined the problem in detail and asked for the recommitment. The industry stepped up to the plate and delivered on their promises.”
Bailey also noted the industry, led by the Steelworkers Union, committed to using and implementing training and work plans to reduce the risk to workers, and he notes WorkSafe BC intensified focused efforts in addressing firms that had accident histories over a period of years that were significantly higher than the industry norm. Finally, he said political support for risk reduction efforts played a role with the Minister of Forests making it clear than the accidents in the forest industry were unacceptable. “There were other factors as well, however I believe that these were the key drivers behind the success of the industry in improving the overall accident rate in 2009,” Bailey added.

Going Forward
Looking forward, Hert says BCFSC will focus on two key areas. “We will concentrate on the high fatality areas – falling and trucking, and we will continue to improve the Safe Companies program, which provides participating companies with a solid foundation for safety,” he explains. “As we look forward in 2010, the mandate doesn’t change. We will continue to reduce fatalities and serious injuries and we are taking that on by overhauling and improving the basic system, and in particular the way Safe Companies is handled and how the audits are handled. We need to take what we have learned and what we are hearing from the industry and really increase the program’s effectiveness and increase the understanding of why people are using it and how they can incorporate it to improve their overall business, including reducing injuries. That’s where the real power comes in and that’s one of the key things we are going to be focusing on.”