Six years ago John Greenwood put his entrepreneurial spirit and business background to good use when he took over the helm of Nisku, Alta.-based Millennium Decking and its parent company, Wood Composites Technologies Inc. 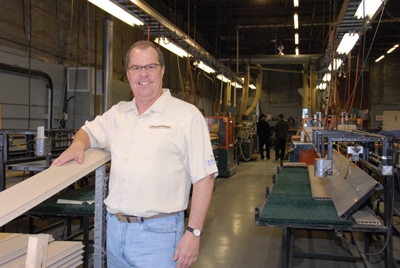 John Greenwood looks over some finished product in the extrusion plant at Millennium Decking. The company has gone from $800 Six years ago John Greenwood put his entrepreneurial spirit and business background to good use when he took over the helm of Nisku

Greenwood, who is today the CEO of both companies, took the then ailing organization from $800,000 in annual sales in 2002 to almost $6 million last year. And he says with little or no further major capital investment, the company has the capability to increase annual sales to $35 million.

“Right now we are only running at 20% of our capacity, but we are very aware that as the new home market shrinks people will turn to renovating the homes they are currently living in,” he explains from his office at the Nisku plant, which is just 30 minutes from downtown Edmonton. “We have six machines and eight lines right here and we can ramp up to full production on very short notice,” he adds.

Millennium Decking may seem like many other decking manufacturers, which raises the question of why Greenwood thinks he can increase sales five fold. “It’s the product,” is his response. “We are not running solid wood decking products. It looks like wood decking, but our line is a composite product that uses primarily PVC waste from the window manufacturing business and wood waste from the wood products industry. This gives us a recycled content of over 90% post industrial waste, and that is something today’s consumers are very interested in,” he explains. 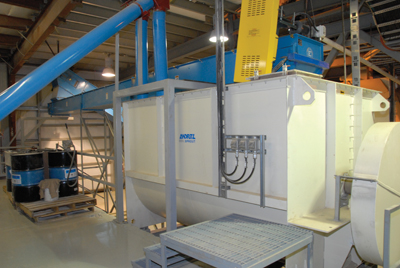 But it’s not just the “green” aspect of the business that Greenwood says attracts customers to Millennium Decking’s products. It’s also the quality, consistency and durability of the line. “We produce a unique decking material that is fire resistant, low maintenance and looks great,” he says. “It is also unique in performance and there is really nothing on the market that comes close to it.”

But it’s not just Greenwood and his sales group that sing the praises of the product. The American Broadcasting Corporation’s (ABC) Extreme Makeover Home Edition has featured Millennium Decking twice in its shows, which depict the process of rebuilding a home from start to finish. “It has been really exciting to be on the show and it has been good exposure for us,” Greenwood notes. “It has also shown us the power of getting media attention. The hits on our website tripled the day after the last Extreme Makeover show aired.”

The product has also hit the Canadian airwaves, being profiled on a Global TV show on cottages, and Greenwood says they have been chosen twice as the decking product for the “next generation house” at the International Builders’ Show – once in Las Vegas and once in Atlanta. He says even when they do the local home show circuit they garner a great deal of attention. “We did the Vancouver and Calgary shows this spring and these events ran over a weekend. On the Monday morning following the shows we got a 3,000 hit spike in our web traffic.”

The company was originally started in 1998 as a junior capital pool with a focus on research and development. “They had developed a North America-wide patent for the combination of different types of plastics and cellulosic materials,” he explains. “However, they had got themselves into a bit of a bind financially so after I came on board, we had to get that sorted out. It was definitely a challenge, but I have confidence in the products we produce and I believe you can build a successful business around a strong product and that is what we have done.”

It was when the chips were at their lowest that Greenwood’s financial background, including 23 years in the banking business with CIBC, came into play. He quickly moved the company from R&D to a commercial focus, pushing into the U.S. market and looking for new opportunities in Canada and overseas.

Today, the company has two plants on six acres close to the Edmonton International Airport and very little in the way of debt. “I have to say we were lucky with our real estate purchases, especially our latest acquisition, which is where we pelletize and mix our materials,” Greenwood says. “Our timing was good and we got a deal on the latest facility that we just couldn’t say ‘no’ to.”

The newest site, which is just a couple of minutes away from the main office and production plant, used to be a reload facility for solid wood lumber products. Now it is Millennium’s “blending plant” and home to a large Andritz Sprout pellet mill, a General Electric 500 hp motor, a large inventory of raw materials and a complex configuration of pipes, tubes and silos.

“We bring in 55,000 lb truckload quantities of wood flour that is essentially sawdust we currently source from moulding manufacturers and other makers of secondary wood products,” Greenwood explains. “We own two walking floor trailers and they not only transport the wood fibre to our plant, but they can also be used for on-site storage.”

The trailers are essentially “plugged in” to the building and then a computer controlled hydraulic pack pre mixes the wood flour with the other additives, which includes recycled PVC that comes into the plant in 2,000 lb packs and has been pulverized before it arrives, colour, and binding agents. The pellet mill then produces what Greenwood describes as “something that looks like rabbit pellets,” which are then shipped to the extrusion plant in a company-owned auger truck, before being loaded in 30,000 lb batches into large silos where they are stored until needed.

From the silos, the pellets are fed into one of the eight manufacturing lines where they are heated to form a consistent material that is then extruded through a die process to form a continuous piece that includes the decking pattern. The boards then go through a cooling process before being cut to length. They are then bundled and wrapped and strapped like traditional packages of lumber prior to being placed into inventory or shipped to customers. The newest line, which is also the one used the most, is from Cincinnati Milacron, a global company focused on manufacturing and selling plastics processing equipment and supplies.

Quality control procedures are built into the manufacturing process and the product is tested every 30 minutes for colour, weight and form. Three times per shift a sample is pulled randomly from each line for further in-house lab testing for properties such as elasticity, rupture points, strength and density. These more extensive tests are conducted under the requirements of Intertek Testing Services and random audits are conducted by Intertek on a regular basis. Greenwood says the testing program is important to the company as Millennium’s decking is one of only four CCMC (Canadian Construction Materials Centre) approved composite decking materials in Canada and the only one based on PVC and wood flour. The products are also compliant with the Canadian building code and Millennium offers its own 20-year non-pro-rated warranty.

Because decking is a seasonal product Greenwood says they quite often run the plants at different production levels to meet demand. He says the spring and summer are the busiest times but they will run year round. “It’s a six-month selling season for us,” he says. “Typically in the winter months we have been running with about 20 employees which includes a sales staff of six who are strategically located around North America, four people in administration and 10 employees on the floor of the two plants. This summer, we expect to ramp up to as many as 18 production employees, but we do have the capability to run as much product as we need to in order to meet demand.”

In the past, Greenwood says Alberta’s labour situation has been a challenge as it was difficult to fill jobs when Millennium had to compete against the oil patch, the forest industry and Alberta’s booming construction wave. “These other businesses have slowed down and things have definitely improved for us in the area of employee recruitment,” he says. “For the most part, we are now able to find employees when we need them and that helps us tremendously.”

Keeping the product line fairly simple has also helped Millennium. They run six-inch-wide boards in 12, 16 and 20 ft lengths and in three colours. When the boards are finished, their composition is approximately 60% PVC material and 35% wood flour, which comes primarily from two moulding manufacturing businesses in Alberta. The last 5% is made up of resins and the “secret ingredient” that is not marked in any of the company’s visible lab or technical information.

On the job site, Greenwood says if you can work with wood, you can work with the Millennium products. “You use all of the same tools and techniques,” he says. “We recommend screws over nails and with our system the screws are hidden.”

He does say the product runs at about twice the price of pressure-treated lumber products but adds the payback is just five years. “When you consider the advantages over solid wood products you really start to see the value,” he explains. “There’s no painting or staining involved, there’s no issues with bug infestations such as termites, no chance of climate-related issues that can cause rot, and just much higher longevity.”

Right now, the market for Millennium is evenly split between the U.S. and Canada and the products are available at Home Depot and Totem Building Supplies. However, Greenwood says they are expanding quickly and his distribution partners are in the process of setting up retail and contractor channels in North America, while at the same time, they are looking at the international market and sold their first order into Russia earlier this year.

“It’s a big market for our product both domestically and overseas and there’s plenty of room for growth,” concludes Greenwood. “We feel comfortable with where we are right now and going forward we are well positioned take advantage of any increase in demand.”