Last fall, we caught up with one of two LH870C harvesters working for Vancouver Island-based contractors. In early spring 2007, Southview Forest Services Ltd. bought an LH870C fitted with a massive LogMax 12000 harvesting head to handle a steady diet of one- to three-tonne trees that can exceed 55 m (180 ft) in height and a butt diameter of 60 cm (24 in). The 12000 series head itself weighs 4,360 kg (9,620 lb) and has a cutting capacity of 102 cm (40 in), suiting it to large west coast wood or gnarly hardwoods. Like the other LH870C on the island, this was sold by Carl Sweet, salesman for Parker Pacific in Campbell River, BC. 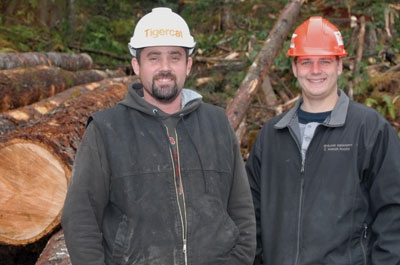 Accessing the job site was an adventure in itself. After driving to Saltry Bay on BC’s Sunshine Coast, we were picked up in a crew boat for a cruise northeast up the Jervis Inlet to Vancouver Bay. From the beach, it was a 30-minute drive up the mountain to the cut block, a 30,000 m3 tract of natural second growth 60- to 70-year-old Douglas fir. 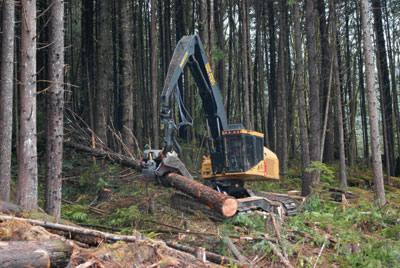 Although Southview’s LH870C usually fells and processes, on this particular job the felling was subcontracted to speed up completion of the contract. Harvester operator Jason Winter explains that this decision was made in an attempt to beat the first heavy snowfalls. Vancouver Bay is a remote site where all equipment must be transported by barge. In addition, the cut block is at higher elevation so heavy snowfall is a real possibility, and likely to cause havoc.

Winter generally works a nine-hour shift and can typically fell and process 300 to 400 m3 per day with a 1 m3 average piece size and favourable terrain conditions. More often than not, however, terrain is unfavourable.

Sweet acknowledges that the west coast has tough working conditions that require large machines to do the job. This is where the LH870C shines. 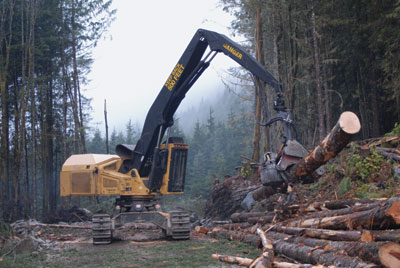 “Tigercat’s long undercarriage and strong levelling system suit it to tough working conditions,” he asserts. “In a lot of areas where the LH870Cs are harvesting, operators are encountering steep broken ground, and along with tough terrain they continually find themselves fighting their way around old timer stumps left over from the first harvest.”

From an operation and performance standpoint, Winter says the machine has a great deal of stick power, and comments that the hydraulic oil never went above 90 C (190 F) in summer. He also notes that when the crew is double shifting, there is not much difference in production between the day and night shift. The HID work lights are an important advantage over halogens.

Southview appreciates the ability of the LH870C to fall and process road right-of-way; the machine can fall, process and stack the wood. Previously it would take two or three machines to do the same job.

Self-loading log trucks transport the loads back down to the beach. Specially designed trailers with collapsing stakes are used. Upon reaching the waterfront, the trucks park parallel to the beach and a front end loader pushes the entire load off of the trailer. The bundled logs slide down a ramp and into the water. Eventually the timber will be floated by tug boat back down the inlet and along the coast to Vancouver. Around here, little moves in or out without touching the water somewhere.

Paul Iarocci is a marketing communications specialist with Tigercat. This article originally appeared in Between the Branches, and is used here with permission.