In today’s automated and electronic world, there are very few variables manufacturers in the wood products industry can’t control. However, there are exceptions to the rule with one of the major ones being Mother Nature. 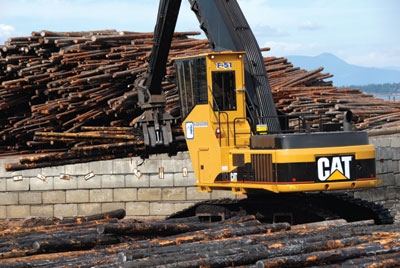 That was the case at Coastland Wood Industries Ltd., a second growth Douglas fir veneer producer in Nanaimo, B.C. The mill is located on the edge of the Gulf of Georgia, which is tidal water and the main storage area for the mill’s log supply, most of which arrives at the site in the form of log booms. For productivity reasons, the mill only wants to handle the logs once whenever possible, taking them from the water and hot loading the mill, rather than placing them into inventory. At high tide, that wasn’t a problem as the logs would be within easy reach of the mill’s excavator style butt-n-top loaders,  but as the tide retreated every day, the logs would slowly become inaccessible due to the maximum reach available with  the loader’s boom. The drop in the water level was just too much, resulting in a limited window of opportunity for pulling the logs out of the water.

Not content with the status quo, the mill’s equipment manager Dwayne Carson went to the guys dealing with the race against the tide every day –  the loader operators. “We want to listen to ourselves when it comes to finding solutions, but we really need to listen to the people sitting in the operator’s seat day in and day out,” he explains. “We wanted to know how we could get more wood out of the water and of course the simple answer was ‘a bigger machine.’ But from a management perspective, a bigger machine costs more to buy, costs more to operate, and consumes more fuel.”

In today’s economy, that made it a tough sell, but Carson wasn’t content to just sit back and lose valuable working time to the tide schedule. He was also well aware that extending his window of opportunity for hauling logs out of the water (commonly called “dewatering”) meant having more daylight hours to work in, which is not only more productive but safer for his crews.

“We really did a lot of work on this,” Carson notes. “We crunched a lot of numbers, we looked at a lot of equipment, we talked with the operators, and we spent countless hours working with Finning Canada, which is the Caterpillar dealer for our area. It was a hard decision, and it was a big decision in this market, but we went ahead and took the plunge, taking delivery of a brand new customized Cat 345 in March of this year.” 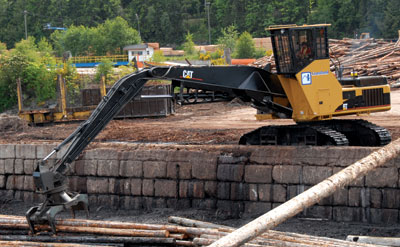 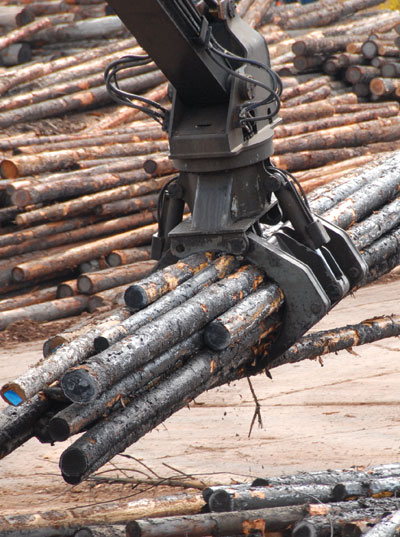 But once the decision to buy the machine was made, the work wasn’t done. In fact, it was just beginning. The undercarriage of the new machine was already in Finning’s inventory in Vancouver, but decisions had to be made on the cab, boom and grapple. “We have worked closely with Finning’s Nanaimo-based general line salesperson Matt Laing for years and he had been suggesting this solution for some time,” Carson adds. “So with Matt’s help, we teamed up with Neil Roine at Finning’s product support group along with T-Mar Industries in Campbell River, B.C., and Welco in Langley, B.C., to customize the
machine for our needs.”

The result is a purpose-built machine that has been beefed up with a Cat 350 materials handler undercarriage and some Cat 365 excavator components. The Welco supplied boom and stick provide for a 50-ft. reach versus the stock 45-ft. reach. Welco also supplied the Westcoast cab, while T-Mar built a purpose-built clam style custom grapple. “The grapple was one of the biggest changes for us,” Carson says. “We had been running with a butt-n-top style grapple for over 20 years, but we designed a grapple for the 345 that didn’t need an outrigger, which essentially eliminated 24 hoses from the machine, and that alone saves us $4 per hour in operating costs.”

Where the benefits of the new machine really shine is in the production numbers. Carson says prior to bringing in the 345 they needed to run two smaller Cat 330 machines to dewater the quantity of logs they needed every day, but one of the machines was only being used 30% of the time. By bringing in the new 345, the mill has been able to put its pair of 330s to other uses and have one machine dedicated to dewatering on a regular basis. “Essentially, we have been able to replace two machines with this one, and since the 345 was delivered, we have only taken it off the beach once,” Carson says. “Her job is to take wood out of the water and because of the extra reach and the 345’s stability, we have been able to do this task for an extra four hours each day.”

And what do the guys in the operator’s seat think of the new machine? “We knew within five minutes we had a winner,” says Steffen Vogt, one of the two main operators. The other main operator, Dwayne’s brother Heath Carson, couldn’t agree more. “I don’t have a negative thing to say about this machine and if we had to do it all over again, I wouldn’t change a thing,” he declares. “It’s got all of the creature comforts such as a nice heated and comfortable seat and air conditioning, it’s smooth and stable, it’s operator friendly, and it has great visibility. It’s also good when we do have to run at night as we had a couple of optional high-intensity lights installed.”

The 345 is also narrower than the 330s it replaced, which offers an added bonus when it comes to manoeuvrability as the Coastland yard was designed for a smaller stock machine. “The 330s were a fixed gauge machine that sit at 14 ft. 9 in.,” explains Dwayne. “The 345 is a variable gauge machine that can go from 12 ft. 6 in. to 14 ft. 6 in. To date, we have only used it at the narrowest width and it is still more stable than the wider 330s, and it is good to know that if we need more stability, we can go wider.”

In total, Coastland moves over one million cubic

metres of wood annually, depending on the markets and has done up to 1.4 million cubic metres when times are good. 700,000 cubic metres is consumed on an annual basis by the mill, while the balance is dewatering and other handling projects that Dwayne’s crew completes for external customers. Right now, they will pull between 60,000 and 70,000 cubic metres out of the water every month and he estimates that just for the Coastland mill alone they need to dewater over 2,000 cubic metres for every operating day.

In addition to the new 345 and the pair of 330s, the Coastland yard runs three Cat 980H wheel loaders, a Cat 320C butt-n-top machine, a Cat 966F loader with an Allu grinder/processor for dealing with yard debris, and five John Deere front end loaders, including one 844 and four 624J models. Coastland also runs a log sort at Port Mellon on the B.C. Sunshine Coast where they have three Cat 980s, a 4300 Linkbelt track loader and a Diamond Z grinder.

As for the new prized possession, the Cat 345. Dwayne wants to minimize its downtime so he has put it on a Finning maintenance contract that covers it “from stem to stern” for the first 12,000 hours. “This gives us a fixed cost for maintenance and repairs and it covers everything from oil changes to air filters,” Dwayne explains. “We maybe pay a little more for this at the front end, but it should pay off in the back end of the machine’s life.”